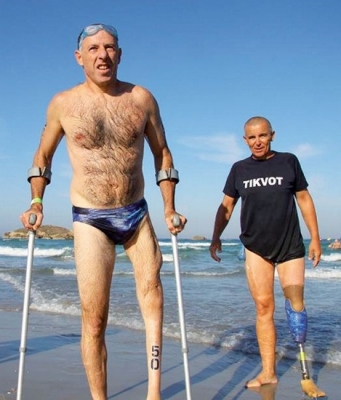 When a terrorist attack occurs, or an army operation goes wrong and lives are lost, the country mourns. But what about those - and they are many - who are seriously injured? Time passes, people forget and the injured are left, perhaps with a missing limb, perhaps paraplegic, to get on with the rest of their lives as best they can.

That was something that troubled Mervin (Rocky) Muravitz, a dynamic former Durbanite who had come on aliya in 1977.

"It started during the second Intifada," he said. "Bombs were going off all over and people were being hurt. I wanted to do something for them, but I wasn't sure what. Then I thought of my buddy in San Francisco, Jeffrey Essakow, who runs a nonprofit association called the Challenged Athletes Foundation which buys sports equipment for physically challenged people. I spoke to him and we decided it would be a good idea to set up something similar here."

Though Rocky is not an athlete himself, sports have always been a big part of his life. At one time, he was on the executive of the Maccabi World Union, , and he believes deeply that involvement in a sports activity can change people's lives for the better. So, with an initial donation from his friend, he co-founded Tikvot ("Hopes") along with the late Steve Averbach (a volunteer, who was himself a quadriplegic as a result of a terror attack), Ehud Edelman and Vic Essakow.

A leg and a prosthetic

Tikvot is a nonprofit, volunteer-based organization that works to rehabilitate Israel's wounded soldiers and victims of terror through sports and helps them to overcome their pain, trauma and disability and rebuild productive lives. Tikvots's message is that by offering enhanced rehabilitation through sports therapy and an emotional framework of support, those injured will be able to focus on something positive. If they feel more active and healthy, they might then also be able to work through some of the psychological issues that they face as a result of their traumatic experiences and channel their energy into positive accomplishments.

It wasn't easy to interest potential recipients initially. "We started by getting in touch with terror victims through the health funds and hospitals, but the sad thing was that a lot of people were skeptical in the beginning. So many, they felt, had taken advantage of them. But we persisted." 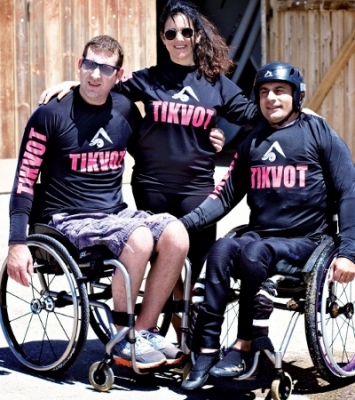 Tikvot's premise is simple: "We ask people what sport they want to do, and then whatever it is, we arrange and pay for it. For example, if someone lives in Netanya and wants to swim, we send them to the nearest swimming club. If someone in the south of the country wants to ride horses, we get them into a local riding school.

"We don't give the people themselves money. We negotiate a price for the service and see that the sport is organized for them, no matter what their disability. There are many professionals in this country who are expert in helping the handicapped."

Unlike many charitable organizations, Tikvot has no "bureaucratic nonsense", as Rocky terms it. "Anyone who applies is accepted if they can provide a certificate from Bituach Leumi attesting to their disability and a doctor's letter approving the sport. It only takes one week to arrange."

This year, 380 new participants received help, out of several thousand altogether. The current annual budget is about $500,000, of which only one salary is paid. The rest of the helpers are volunteers.

Tikvot has been instrumental in producing many moving success stories. One example is Noam Gershony, a former helicopter pilot who miraculously survived a crash in which he fell a kilometer, during the second Lebanon war. Simone Farbstein, Director of the program, met him in Tel Hashomer hospital and persuaded him to try waterskiing. His initial response was, "You're crazy!". Nevertheless, he tried it and enjoyed it. Next, he tried skiing, at which he was so successful that he participated in a ski trip to Mont Blanc in France, the highest mountain in Western Europe. Says Rocky, "He saw that he could do anything."

On the bike ... Michael Katsanelson

In 2012, he won a gold medal for tennis at the Paralympics.

Another winner is Eitan Hermon, who was an avid competitive racer before being wounded in 2006 when a roadside bomb detonated under his armored personnel carrier. Ultimately, he lost a leg.

Determined to run marathons with his prosthetic leg, he began training a year after the amputation. Four months later, he managed to run a 10 km race and within a year, he had completed the full Tiberias marathon of 42 km in an impressive 3 ½ hours – faster than many able-bodied runners. He was the first Israeli amputee to do so. His aim is to break the world record and become the fastest single-leg long-distance runner in the world; he is only five minutes short of that record. Now in training for the Paris Marathon in April, he runs about 120 km a week, which is very difficult and painful since his prosthesis rubs against his limb. Still, with the encouragement of Tikvot, he runs on, an inspiration to other disabled athletes, and indeed to all of us.

Shiri Mervis survived a bombing attack in which her friend was killed in front of her. She still dreams of death, and hopes one day the dreams will fade. In the meantime, she swims. "It's not just the sport," she says. "I'm meeting people who know how I feel. It's changed my life."

Not all are young victims. One grandmother has taken up swimming after surviving a terror attack and claims the sport has given her a new zest for life.

Among the sports that TIKVOT funds are snowboarding, sailing, wall climbing, karting, arm-operated biking, kite surfing, archery, soccer and even volleyball, played sitting down. "It looked like a parody," said one participant, "except we had so much fun!"

A group of twenty men wounded in the IDF have even formed a TIKVOT triathlon group, participating with other able-bodied athletes in swimming, cycling and running competitions around the country.

As Rocky puts it, "We want to get people out of their lonely homes, help them meet people and make them smile again. Sports can do that. It gives the soul strength."