Sylvia Navon, a contributor to the first ESRA Newsletter, is now retired and living at Beth Protea in Herzliya, which is where Lynette Karp caught up with her.

Many of our readers were participants in the miracle of the development of this country, watching in awe the steady steps of its growth to the modern and unique first-world country that it is today. It is hard to imagine the concessions and adjustments that people coming from anywhere else in the world had to make. The pioneers and builders of Israel had a heavy price to pay in comfort and convenience - but are today rewarded by the success of those years of hard work and effort.

Sylvia Navon made aliyah in 1961 from South Africa. Here is her story. It is similar to the story of so many Israelis and I am certain that this article will allow readers a few moments to turn back the clock and relive personal adventures.

Sylvia's father, David Segal, was a 'Palestinian'. She explained to me that he had arrived in South Africa from Palestine together with a large group of young men descended from Bratislava and Eastern Europe at the turn of the twentieth century. Life hadn't given them the opportunity to make a living in the Middle East and so they had moved on. These youngsters formed 'The Palestine Society' in Johannesburg and were known in South Africa as 'the Palestinians'. Her father became apprenticed to a carpenter and later opened his own timber business. In time, he married and had six children. Sylvia was the baby of that family, nine years younger than her nearest sibling. From a young age, she was determined to come to Israel and studied Nursery School education on the premise that it would be a useful skill to have were she ever to settle on a kibbutz. That was not to be.

Aaron and Sylvia married in 1959 and arrived in Israel in 1961. After Aaron had done a stint in an ulpan while Sylvia stayed with his relatives on Moshav Habonim, they settled in Rehovot, where he had accepted a job. They bought a small house of two rooms with huge cracks in the walls, needing much upkeep. It had a large tract of land around it planted with fruit trees, which the family and in fact the whole street enjoyed, with an abundance of fruit in season. It was home not only for them but also for a stream of visiting South Africans who were always welcome. Aaron, a qualified accountant, worked happily at Suliatan in Rehovot and life was good.

The Navons settled down and immediately applied for a telephone. Sylvia grinned wryly as she told me that the telephone arrived five years later, the very day before they were leaving Rehovot to move to Ramat HaSharon. She accepted the phone and swiftly transferred the line to their new abode.

That story of the telephone Sylvia wrote up in the first edition of what developed into our ESRAmagazine. At that time the publication, called ESRA Newsletter, took the form of a roneoed newssheet which two volunteers distributed to residents of Herzliya. It was a far cry from today's periodical of superb quality, nationally distributed in Israel, albeit still predominantly by volunteer 'postmen' foot slogging their way around the suburbs. Further afield, it is posted throughout Israel and even internationally, supported by many in the broad wide world. Aaron, too, was one of ESRA's volunteer postmen, delivering magazines by foot, in Ramat Hasharon. The family have remained loyal to ESRA, with donations and support throughout the forty years.

Arriving in Neve Magen on the outskirts of Ramat Hasharon in 1966, the Navons were lucky enough to have not only a telephone but also a `private', the name given to a motor car privately owned, which was a scarce luxury for most. Their neighbors shared in the convenience of the Navon's telephone and a motor car so near, to negotiate the sandy roads in the summer and the muddy tracks in the winter. `The street' was a blessing in disguise; it was a brotherhood of caring and concerned people. If a family went away, the next door neighbor would water the plants, check the doors, collect the post and on occasion even housed a child or two when emergencies took parents back overseas or were called away unexpectedly. Aaron then worked in Tel Aviv for Hertz Rent-A-Car, a very successful move where he was highly respected and he became an important cog in the wheel of that business. The family were transferred to New York for two years and to London for a year - a wonderful experience for them and their young children. Aaron worked at Hertz until his retirement many years later.

Sylvia was not idle in these years. She had an interesting career. She worked for the Wise Observatory (Named after Florence and George Wise) of Mitzpe Ramon, but was stationed in Tel Aviv University, where she remained for 27 years. The Observatory attracted many scientists from overseas due to the wonderful sunshine of Israel and Sylvia worked for a number of renowned and brilliant Israeli astro-physicists, amongst them Elia Leibowitz, Hagai Netzer, Tsevi Mazeh and Dan Maoz. In addition, she had the opportunity of enjoying the university's tennis facilities, the swimming pool, the lectures and the general stimulation of campus life in those halcyon and exciting years. Shortly after the peace treaty between Egypt and Israel was signed between Anwar Sadat and Menachem Begin in 1979, a meeting of the minds of astro-physicists from Egypt and Israel took place at Taba. It was an exciting and hopeful event for all concerned and Sylvia was honored to be part of that event.

The Navons had three children, who with the passage of time grew up, were educated, married and had offspring of their own. The daughter, Debra Cain, lives in Australia, one son, Michael in America and the other son, Guy in Israel. And there are eight grandchildren. Fortunately, with modern technology they are all able to be in constant contact.

A practical move to Beth Protea in Herzliya was made after a protracted stay in hospital by Aaron. They had a few years together in their new home to enjoy the security and peace of mind offered there before Aaron sadly passed away. Sylvia has close friends nearby and is a popular resident of Beth Protea, continuing to enjoy the stimulation and company that it offers. 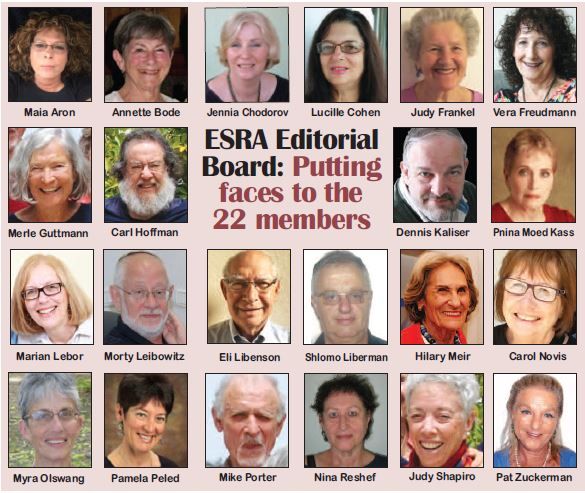