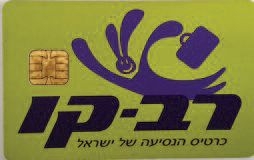 I enjoy learning from all the consumer columns I find in ESRAmagazine.

In the last one - #188, I had to say Amen to: "Before starting a recipe, I count the number of ingredients."

Even if I have all of the ingredients, the time and trouble to get each one out, measure and add isn't part of my schedule.

The problem with many "Five ingredients or less" recipes is that many of the ingredients in them are prepared items, and few are "start from scratch" recipes.

In how to get rid of germs on Scotch-Brite as well as on kitchen washcloths, is simply to put them on a dish and microwave them for one minute. This can be done every other day.

It might be a light rail, but the fines are heavy

Rav Kav Card holders - beware of what fines you might be forced to pay. How about NIS 185.90 to the Jerusalem Light Rail? Even in Israel, buyer be aware - Caveat Emptor. Make sure you have the correct amount of money on your Rav Kav Card for your mode of transportation. Each one has its own method of payment.

On a recent visit to Jerusalem, a friend asked if I had a Rav Kav Card so that we could take the Light Rail to the Old City from the Central Bus Station. His Rav Kav was the same as mine, so we entered the approaching train - actually we were pushed. Then the doors closed. When it was my turn to swipe my card on the machine, a red light went on. I had money on my card because I had paid via Egged and could not understand why I was having a problem.

As an honest person, I searched for help. I found two very unhelpful attendants and explained the situation. When we reached my stop I was escorted out of the Light Rail feeling like a criminal. I waited and waited because one of the attendants was on the phone. When he got off the phone, he returned my ID and Rav Kav Card along with a NIS 185 fine for a NIS 3 fare. I asked them what the problem was, and they said that I had no money on my card for the Light Rail. That was news to me because my bus receipt showed that I had NIS 35. They told me to dispute the fine, which I did. Two months later I received a registered letter in Hebrew, telling me that my claim was denied because I had broken the law by not having money on my Rav Kav for the Light Rail.

Have you also received an unreasonable fine by the Jerusalem Light Rail or other public transportation in Israel? Suggestions, comments, or to share your experience using the Rav Kav Card, please feel free to email me at This email address is being protected from spambots. You need JavaScript enabled to view it.

A friend once told me, "A problem is an opportunity for change." If enough of us speak up, maybe as a group of English speakers we can make a change.

The editor writes: On the citypass website it states the following 'Unlike buses, on the Jerusalem Light Rail you must make sure to have a ride ticket in advance ofboarding. Please note: tickets are not available for purchase on board the lightrail'. For more information please see:http://www.citypass.co.il

Where is my letter? It's in 'Lost' Vegas

On December 25, 2016 I sent a registered letter to Las Vegas. Today, on February 8, 2017, my letter is still somewhere between Holon and Las Vegas. When I gave up on the Israeli Post Office, I sent a copy of the letter via DHL. 90 minutes after I submitted the request online, a man came to my apartment to pick up the letter. 48 hours later my friend received my letter in Las Vegas. It cost only NIS 95.

I have been active in this issue for the past three and a half years, including involvements in the new laws in the Knesset etc. You are invited to join the Facebook page "מחזירים את המדרכות להולכי הרגל". Recently, I organized a group lawsuit against the Ministry of Transportation - and more. Along with campaigns it is important to join together and be informed.

Hagit Urian
Tel: 050 586 4477
Email: This email address is being protected from spambots. You need JavaScript enabled to view it.

In praise of poet Sonia and reviewer Carol

In the latest ESRAmagazine, Carol Novis writes a great review of Sonia's Levi's book of poetry. I know Sonia and I know her book - she is a delightful person and writes delightful and most unusual poetry - as Carol describes - staccato and rather like rap music, but unlike many modern poems - lucid and totally understandable. Thank you Sonia, and thank you Carol, for this so- fitting write up.

Thanks to help from ESRA, Nurit has got 100 per cent in her math exam

We want to thank you, the ESRA Welfare Committee, for your assistance of NIS 1,500 to Nurit B. in order to help her succeed in her studies. Nurit has to combat obstacles due to her life-long poverty and bad health. She has passed her math exam with the mark of 100%, and your help.