And there it is - standing proudly in a verdant site located on the south-western slopes of the Carmel Mountains in Zichron Yaacov. The Elma Arts Complex Hotel overlooks the changing hues of the Mediterranean Sea, and its walls enclose a tale of determination and dedication.

The original building was scheduled for demolition in 2005, but philanthropist and art collector Lily Elstein, whose roots were planted in this area as her family was amongst the founders of Zichron, refused to let this happen. She foresaw a different and special future for the place.

In 1968, the Israel Workers' Union (Histadrut) obtained the rights to construct a rest and holiday home on the site – Mivtachim Inn. The architect was Yaakov Rechter and as the construction cemented itself on the hillside, it became one of the celebrated examples of Israeli architecture of the 60s with its plain, white concrete walls – a style known as 'Brutalist'. Yaakov Rechter was awarded the Israeli Prize for architecture in 1973 for its design and this has been respected in the revamping and additions to the original buildings. 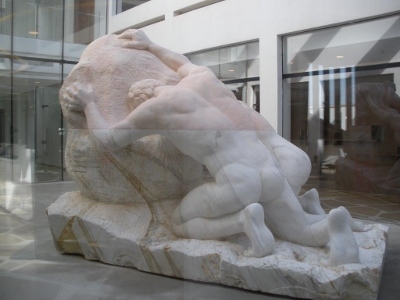 Thirsty work ... the statue which greets visitors to the hotel

However, as time passed and life and tastes in Israel changed, the Inn lost its popularity and in 2005, it was put on the market together with the 110 dunams of surrounding land. Naturally, this opened doors to large construction companies but the mayor of Zichron realized the dangers of large apartment buildings marring this site and he imposed building restrictions.

Lily Elstein took a deep breath and decided to fulfill a dream. She made an exceptional offer that could not be refused and the scene was set. In fact it was Yaakov Rechter's son. Amnon, together with Ranni Ziss, who tackled the architectural challenges of turning the outdated holiday home into this special complex. Besides being a deluxe hotel, it has brought culture in the form of music and art not just to Zichron Yaacov but to an ever-expanding number of Israelis and tourists since its opening in 2014.

This goal has been achieved within the Arts Complex which houses spacious galleries where a fascinating choice of both paintings and sculptures are on show together with a 450 seat concert hall. Besides its specialized acoustics, the concert hall also houses a custom- designed pipe organ of 1.414 pipes as well as two Steinway Model D concert grands. There is a monthly program of concerts to enjoy with a wide variety of orchestras, soloist musicians, singers;and classical and jazz musicians who perform in The Cube. This is another cup of tea – or should I say cocktail glass? – where one can drink, eat and enjoy an intimate serving of music, simply relaxing around comfortable tables or at the bar. 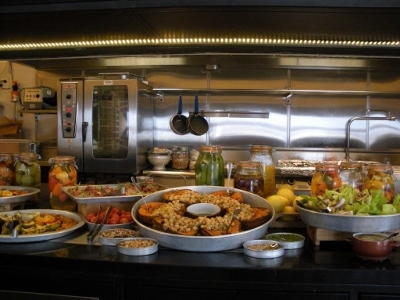 Lily Elstein’s personal touch is evident in the restaurant

On the subject of food, there is also the main restaurant of the complex – Oratorio - where once again, Lily's personal touch is in evidence. Shelves of books from the original library of her home line one of the walls together with beautiful and colorful etchings – even some by Picasso – hanging beside homely log fires. The menus are suited to seasonal vegetables and fruits and nurture an Italian- flavored kitchen.

A stunning view from the hotel

My initial introduction to Elma was when I attended a brilliant midday organ concert, the likes of which I had never heard before. Nor had the majority of the audience who filled the auditorium. The group with whom I had come was also introduced to the other delights at the complex.

Besides the stretches of natural beauty seen from the large veranda that faced the fishponds of Maagan Michael and the waves of the sea washing up on the rock-lined shores, I was entranced by the large statue that greets visitors when they enter the complex. The statue, named 'Thirsty' is the work of Sigalit Landau who with the aid of Oleg Kuklin built a plaster prototype of the statue. This was sent to the Cervietti Studio in Italy where it was doubled in size and carved into shape using two types of marble. The finished object which was shipped back home to Israel weighed some 26 tons. To me, it epitomizes the actual accomplishment of Lily Elstein, whose determination has pushed the rock into place and brought such special culture to fruition.