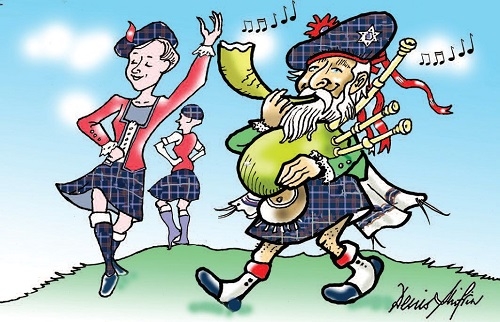 While Britain is immersed in arguments for and against Brexit (whether or not to leave the EU),and the US isin the throes of the bitterest presidential election campaign in its history,the newspapers of both countries are abuzz with much bigger news:'Scottish Jews finally have their own tartan after a 300 year wait' (Daily Mail – 28th March 2016); 'First official Jewish tartan unveiled' (The Scotsman – 29th March); 'Jews get their own tartan for Kosher kilts' (The Times: London - 30th March);'First Jewish Tartan Unveiled' (Haaretz - 30th March);'Kosher Kilts and Plaid Skullcaps' (New York Times – 31st March) The news is rumored to have even reached the heady pages of Time Magazine.

Apparently the Jews of Scotland finally have a tartan to call their own.

However, despite the seeming excitement engendered by these headlines around the world,the Facebook page 'Scots in Israel' (112 members) was all of a twitter. Many of its members were nonplussed and noted that this was hardly news.

The facts are that in 2008 a Glaswegian dentist, Dr Clive Schmulian, met Paul Harris, editor of the local Jewish Telegraph, at a charity dinner. Schmulian was wearing a Flower of Scotland tartan kilt and Harris noted that it was surprising-given the long presence of Jews in Scotland - that there was no Jewish kilt or tartan. There and then, they decided to develop a Jewish tartan and asked Slanj, a leading Scottish kilt manufacturer, to come up with three designs. The Jewish Telegraph ran an online poll, and apparently 10,000 people voted. The winning design was registered for the Scottish Jewish Community. Proceeds from sales went to charity, but that tartan is no longer being produced.

Enter Rabbi Mendel Jacobs who runs a small Lubavitcher congregation in Glasgow and styles himself the only Scottish-born rabbi in Scotland. He claims that he registered a tartan design eight years ago - before the Schmulian/Harris tartan. At any rate, given the demise of the latter, Jacobs now has a clear field with his more colorful design. He has drawn a wave of attention for his 'Jewish tartan', the first kosher Jewish tartan registered with the official Scottish Register of Tartans established by the new Scottish Parliament in 2008. Jacobs is quoted by the above newspapers as having said:"there's a kind of rebirth which is much bigger. We've already had a lot of interest from around the world,"

But why let the facts get in the way of a good story? Jacobs is known not to be averse to a bit of publicity. As one detractor in 'Scots in Israel'wrote: -'Mendel calls paper -"'Hi, having a slow news day? Have you heard about the new Jewish Tartan?" (journalist rubs hands and calls editor– "Those Jews, what will they think of next?").''

This tartan, featuring distinctive tones of navy blue, white and burgundy, has the blessing of rabbinic authorities being shatnez-compliant (non wool-linen mix). The design is a fusion of the blue and white of the Scottish Saltire and the Israeli flag with lines of gold representing the gold from the Ark and silver from the adornments of Torah scrolls while the burgundy symbolizes Kiddush wine. According to Rabbi Jacobs, religious authorities worked together to come up with a design that represents both Jewish values and Scottish history. Jacobs is quoted as having said that there is a Polish tartan and a Sikh tartan so why not a Jewish one? 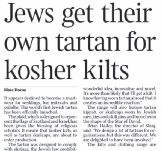 How the London Times reported the tartan story

There is a wide and diverse range of Jewish tartan items on offer including kilts, flat caps, ties, ceramic mugs, novelty pens,cummerbunds, travel rugs and even kipot, talitot and bags. One can even buy a set of three Jewish tartan golf balls for £14.95. The price of a kilt is on the high side, and at £420(NIS2580) it is unlikely to have much take-up from within the shrinking indigenous community. Sales will most probably go down well amongst the Scottish/Jewish expatriate Diaspora celebrating weddings, bar mitzvahs, Scottish ceilidhs and Burns Suppers around the world, be it in the States, Australia or Israel.Those interested should visit www.jewishtartan.com/pricelist

What may be of interest to Jews in the Diaspora who want a representation of Jewish-Scottish culture is the pictorial history of the Glasgow Jewish community:Jewish Glasgow by Collins, Kaplan and Kliner (see ESRAmagazineNo 183) which can be ordered on www.sjac.org.uk.

While the source of this recent non-story is a bit of an enigma, the more burning question remains – what does a Scotsman wear underneath his kilt?