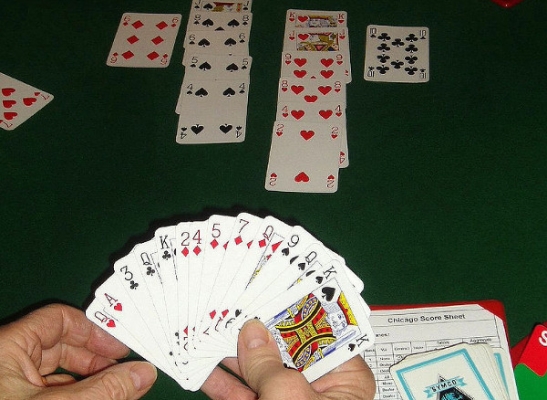 Two avid bridge players having argued over the years as to the points required for a 3NT contact – was it 25, 26 or 27 – decided to put the question to rest by consulting the club expert. "What do you need for 3NT?", they asked. "Nine tricks", the expert blandly replied.

A case in point: My cousin Len Rapeport, having recently taken up bridge in his retirement in Australia, was playing in one of his first tournaments and found himself, sitting South, with the following hand:

West opened the bidding with 1H, which her partner raised to 3H. Without as much as a blink, Len bid 3NT which was doubled. As Len had reckoned she would, West under-led her ♥A and 9 tricks were there for the taking. Novices rush in where experts fear to tread.

In a more serious vein, 9 tricks can be difficult to come by and most 3NT contacts require careful planning and thought. Consider the following hand in which you are declarer in 3NT after East had opened the bidding with 1S. West leads the ♠8 and you capture East's ♠K with the ♠A in your hand.

You have 5 tricks on top: 2 spades, 1 heart and 2 diamonds. Attractive as they appear, you will not be able to score another 4 tricks in hearts as East must have both the ♥K and the ♣A for his opening bid. Your best bet is to look to the club suit for the additional 4 tricks. All you need to do is knock out the Ace in that suit. So, at trick 2, you play a small club from your hand
and insert dummy's ♣Q. East will win the trick and drive out your second spade stopper but you will have the club tricks needed for the contract, right? Well, not quite. If East's ♣A is singleton, West will be left with 3 clubs headed by the ♣ 10 9 and you will only be able to score 2 club tricks without letting the opponents in. The safer play is to enter dummy at trick 2 with the ♦K and then lead the ♣7 from the table. If East doesn't play the ♣A, win in hand with the ♣K and continue clubs.

Outside of the heart suit, you have 5 tricks on top. If hearts break 3-3 you have 5 tricks in that suit for a total of 10 tricks.  However, in the more likely event they are 4-2 and East has 4 to the ♥J, you will end up a trick short. You can afford to lose a heart to West so cross to the dummy with either of the minor suits and play the ♥10. If East does not cover, duck to West. If
West wins, he cannot attack spades without giving you a tenth trick. Whatever the outcome of this safety play in hearts, you have at least the 9 tricks needed for the contact and 9 is all you need.