In a fortuitous twist of fate, a change of date for our outing to SodaStream had us visiting on the very day that four Muslim prayer rooms and a synagogue were to be dedicated at the new Rahat campus of the iconic Israeli sparkling water brand. This was not a ceremony one is likely to see at other factories around the world. But Daniel Birnbaum, CEO of SodaStream, not only took a dying company and turned its performance around, he took on the Boycott, Divestment and Sanctions (BDS) movement and used its intended ruination to make this company the world leader in home carbonization. Alongside its business success, he has made it a model of peaceful coexistence and opportunity for the Negev and for the country.

Previously located in an industrial area in Mishor Adumim, just over the Green Line near Jerusalem, SodaStream was the first and primary target of the BDS movement. Birnbaum showed one of many videos of nasty demonstrations against the company around the world, this particular one in Cliffs Variety Store outside San Francisco on Christmas Eve in 2015. Decked out in Santa hats, people chanted slogans against SodaStream and Israel to the tunes of Christmas carols. It is likely that most of the protesters had never been to Israel and wouldn't know a Palestinian Arab from a Sikh.

In Mishor Adumim, SodaStream employed about 600 Palestinian Arabs from Judea and Samaria and paid them the same wages as were paid to Jewish Israeli employees, gave them the same benefits and the same career opportunities. Each Palestinian Arab working there supported on the average of ten people; their SodaStream salaries were four times what they would have earned had they been able to find jobs with the Palestinian Authority. But the Israel-hating world wouldn't have it.

Birnbaum spoke about the BDS movement at the United Nations, in the US Congress and on the BBC. He became an arm of the Israeli government's hasbara (public diplomacy). While this was not his intent when he took over the struggling company, he had to explain to the world why boycotting Israel was wrong not only for Israelis, but for the Palestinian Arabs as well.

The company was outgrowing its facilities in Mishor Adumim and being pressured by the BDS movement to stop producing in the disputed territories. In May of 2013, SodaStream relocated to its new Lehavim plant in Rahat, the largest Arab town in Israel, populated mostly by Bedouins. While fighting for 15 months with the Israeli government for permission for his Palestinian workers to cross into Israel to work at the new plant, Birnbaum filled the factory with local workers—Bedouins, Arabs, Jews from Beer Sheva, Russian immigrants, a total mix of people. Unemployment in Rahat had been 36% and is now down to 11%. 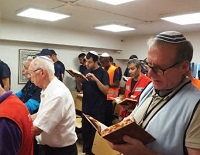 Minchah in the New Synagogue at SodaStream 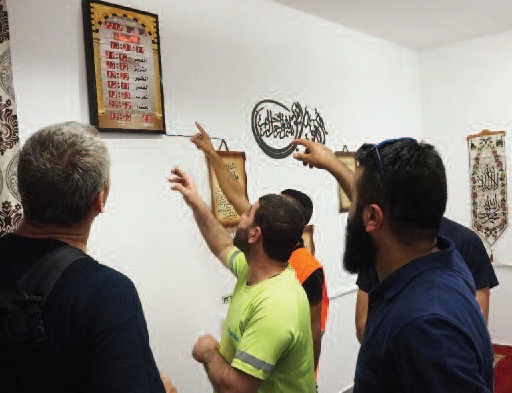 Time for prayers in the Muslim Men’s Prayer Room

One of the first things that Birnbaum did when he became CEO was to open prayer rooms and a synagogue and we were fortunate to visit the new campus on the very day that a Torah scroll, a new synagogue and four Muslim prayer rooms (3 for men, 1 for women) were to be dedicated in what he calls our "Island of Peace".

After a personal introduction to the company by Birnbaum himself, including the showing of several recruitment videos and clever adverts, a personalized factory tour by the CEO, and lunch in the SodaStream dining hall, we joined many of the 1,800 employees from the Rahat campus, half of whom are Muslim and half of whom are Jews, in a procession with the Torah scroll and marching musicians to a staging area for the ceremony.

After the plant manager spoke about Albert Einstein's comment that "Love is stronger than any force in the universe," Rabbi Ervin Birnbaum, the CEO's father, quoted scripture, "How amazing is this place! This must be the place of the Lord," an apt choice for such a harmonious workplace. He spoke about the uniting force of the synagogue—joining heaven and earth, and connecting people. At SodaStream Jews are connected to Arabs, speakers of Amharic to speakers of Russian. He wished that the synagogue would be able to build bridges from heart to heart in good health for many years to come.

Daniel Birnbaum credited his parents, Hadassa and Ervin, for all he has done. He said that "Here at SodaStream we have made a peace that no leader has been able to do. You, the workers, have been able to do this…and on the way you also make soda. Every one of you is a soldier in the army of peace." He added, "At SodaStream we pray all day. As soon as we sign in, we are doing the work of God, worship in the form of work and making peace." He ended with this prayer in Hebrew: "May he who makes peace in the heavens make peace on earth among all men."

The Arab mayor of Rahat, Talal Al-Krenawai, thanked Birnbaum for all he has done for the city and wished him and his wife happiness in the future. He said, "In Rahat the second largest employer is the municipality with 1,200 workers and we have no prayer room. Jews, Muslims, Christians, Druze…we all pray to the same God. SodaStream is an example for the whole country."

Next to the podium was an imam who prayed in Arabic and spoke about this emotional day on which SodaStream is dedicating various prayer rooms. He offered thanks from the bottom of his heart for the consideration of the workers' needs.

Daniel Birnbaum's wife, Bat-Ella, a professional Israeli singer, led the group in singing 'Osim Shalom', let there be peace, in which she changed some of the lyrics to say "peace for all those who live on earth". This was followed by a special birthday cake for Rabbi Birnbaum.

From this most unusual and moving ceremony we proceeded to view the synagogue, the women's prayer room and one of the men's prayer rooms, of which the workers seemed very proud.

In the plastics factory, which operates 24 hours a day, 7 days a week and closes only for Yom Kippur, they make 200,000 parts per day. There, they also do the bottle blowing in which the embryo of a bottle is heated and air blown into a mold. Every eight seconds, four bottles are made. The special plastic carbonizing bottles are the most complicated items made in the factory. Much of the equipment in the factory was designed and built in Israel.

The assembly room tour, in another building, was led by a 42-year-old Palestinian man with five children who is the manager of a section. He told us about the three work shifts, differing in length depending upon the available time of the workers to work. There are fifteen lines and three line-managers. Workers switch sides daily and they must know all aspects of the SodaStream production. The switching also wards off tedium and allows them to get to know more workers. He told us that at SodaStream, no one asks if you are Palestinian; it's all just the SodaStream family.

In the metals factory building a young man named Jonas showed us around. He had been with SodaStream only one and a half months and was from Brazil. He pointed out the coexistence not only between Arab and Jew and between men and women but also between people from Brazil and Cuba.

Here, they build the cylinders for the world market. A robot is used in this plant to start the cylinders. SodaStream does twice what the regulations require when it comes to the inspection of the cylinders and they do a pressure check before putting on a valve. The factory has an automatic machine, tailor-made in Israel, that does the same job as manual assembly. They are testing out the use of these machines because it is believed that this is the future. So far, the results are about the same as for the manual assembly. Last month they produced 750,000 cylinders in one month, breaking their own records.

SodaStream is now the world leader in home carbonization and the number one sparkling water brand by volume in the world. They are addressing growing consumer trends. There are 30 million active users across 45 countries. The company had $543 million in revenues in 2017 and is traded on NASDAQ and the TASE.

When Birnbaum took over the company in 2007, Coke was "the enemy". Their first Super Bowl ad was of Coke and Pepsi trucks racing to a mini market. It showed exploding bottles and told how many bottles SodaStream could have saved. The ad ended up banned from the Super Bowl. The New York Times ran an article about "the best Super Bowl commercial you didn't see" and the video went viral on the Internet. It was the first time that a commercial had been banned in the U.S. for something other than pornography. The Super Bowl didn't want to vex its other soda sponsors. SodaStream got great publicity without ever running the ad at the baseball game.

In another SodaStream promotion, the company placed large cages around the world with each containing the number of plastic bottles used by the average family in three years, the life of one SodaStream plastic carbonizing bottle. Coke tried to sue the company because there were Coke bottles in the cages. SodaStream had picked up the plastic soda bottles from the trash. The company got millions of dollars' worth of promotion from the publicity generated by this threat.

Currently SodaSteam is filing a class action law suit against the competition for damage to the environment.

In more recent years, the consumption of Coke, which had been a major world brand, is down as the perception is that the product is unhealthful. In response, SodaStream shifted its position as a Coke alternative to "Water Made Exciting".

In a commercial that they ran only on the Internet, they used the strongest man in the world who said "f**k" in the ad in Russian. The UK banned the ad, but it was only on the Internet. The press picked up on the story and said, "Watch the banned ad".

Two well-known Jewish actresses have participated in SodaStream ads. Mayim Bialik, an American, best known for her roles in the film Beaches and the TV shows Blossom and The Big Bang Theory, who just happens to have a Ph.D. in neuroscience, stars in the SodaStream ad "Homoschlepiens" as a neuroscientist. The amusing ad depicts a strange earlier form of man that used to carry (schlep) bottles of water from the market.

And, of course, there is the famous 2014 Super Bowl ad with Scarlett Johansson, the one that was first banned because it contained the names Coke and Pepsi. SodaStream deleted those names and the Super Bowl ran the ad. Birnbaum explained to us how he sat down with Johansson and told her that she would get hassled by the BDS movement because of her involvement with SodaStream. She said that she was not worried; SodaStream was doing the right thing by offering equal wages, benefits, and opportunities to the Palestinian Arab workers. Having worked as a volunteer ambassador for Oxfam for some time, the organization told Johansson that she could no longer work for them if she worked for SodaStream, so she quit Oxfam. 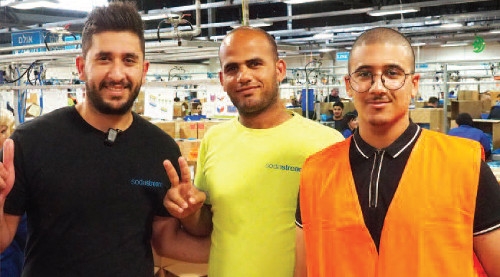 Happy in their work . . . Jewish and Arab employees of SodaStream