Kibbutz Hannaton is a small, family-oriented kibbutz in the Jezreel Valley, founded by members of the Masorti (Conservative) movement. It's a pleasant place to live for its mainly young residents, with a strong community spirit and an admirable Educational Center, but it has never been particularly well known outside of the area.

But now, Kibbutz Hannaton has a claim to fame that has hit headlines. It has become the proud home of a transplanted mikveh dating from the Second Temple Mishna Period, saved by kibbutz members at the last minute from being paved over during the construction of a new interchange near Hamovil Junction, about three kilometers from the kibbutz.

The project began when the road works team of Netivei Israel, the National Transport Infrastructure Company digging up the area, discovered evidence of an archeological find. They called in the Israel Antiquities Authority, as required, which started an exploratory dig. Kibbutz Hannaton member Steve Gray happened to be working as a volunteer on that dig, and in June, once it became clear what the find was, he called Anat Harrel, another kibbutz member who was also working as a volunteer on a dig in the area.

"He told me, 'You're not going to believe this. We found a mikveh. They think it's from the Second Temple Period.' We were incredibly excited," said Anat.

"The Israel Antiquities Authority has a new approach to their finds these days," she explained. "When something interesting has been discovered in a dig, they have an open house and invite the community to see the discovery. In this case, they knew they had found something big here. Of course we went to see it. It was such a beautiful little mikveh. The road works couldn't be changed to avoid it, so after considering the various possibilities, the plan was to carefully cover up the mikveh with concrete for future generations, after proper photographs and documentation had taken place, and build the road on top of it." 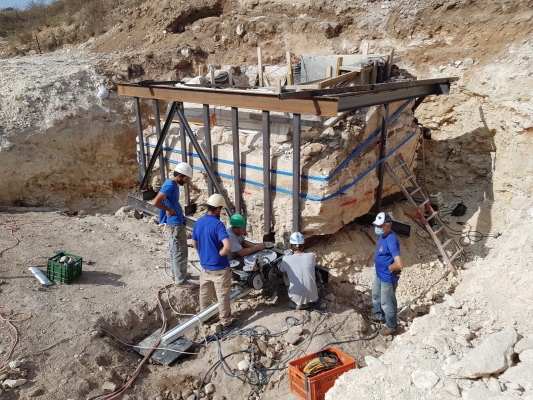 "We decided, no way!" Along with Haviva Ner-David, a rabbi and writer who runs the Shmaya Mikveh on the kibbutz and holds a doctorate on the subject of mikveh from Bar Ilan University, they decided to try to save the mikveh by bringing it to Hannaton.

(Hannaton's own Shmaya Mikveh, by the way, is the only mikveh in Israel open to anyone, of any age, gender or faith, who wants to immerse or just to see what a mikveh looks like.)

The excavation directors, Abd Elghani Ibrahim and Dr. Walid Atrash of the Israel Antiquities Authority, liked the idea and that was how Mission Mikveh started.

Clearly, moving a 57-ton structure, basically a hole embedded in bedrock, was going to be an expensive project, if it could be done at all. Nevertheless, the kibbutz members formed a committee and established an Internet crowd-funding project. They approached government and other organizations, such as the Netivei Yisrael road building firm, the Jezreel Valley Regional Council, the Council for the Preservation of Historical Sites as well as the Antiquities Authority, and they managed to raise the required sum of several hundred thousand shekels. Netivei Israel undertook to do the work.

The excavation began in September 2020 and took three weeks to complete. The company which was hired for the project had never done anything like this before (although they had done other complicated jobs) and the challenges were daunting. The mikveh had to be reinforced and carved out of limestone, beams and a steel cage had to be constructed around it, bars installed underneath, and a crane had to lift the huge structure onto a flatbed truck, which would transport it to a hole seven meters wide and three meters deep that had been dug to receive it.

"Basically we took a hole and made a bigger hole to get it out," said Anat. The transplanted mikveh is now located near Kibbutz Hannaton's existing mikveh.

The excavation was carried out by workers from the village of Kfar Manda, students on pre-army programs, and local volunteers, including people from Kibbutz Hannaton.

The dream is to make the mikveh a working ritual bath, available to everyone who wants to use it. It will not be under the control of the Rabbinate.

The mikveh has a historical significance beyond its functional purpose. Ritual baths of this period are rare in the Galilee – only four others have been discovered in nearby Tzippori, although there are many in Jerusalem and the Dead Sea area.

How do the archeologists know that the mikveh dates from the Second Temple period? One reason is the type of plaster used, which is characteristic of the period. Also coins found in the area date back to before the destruction of the Temple.

Archaeologically, the main significance of the find is not the mikveh per se, but the fact that its presence showed that there was a wealthy farmstead in the area outside the walls of Tzipori 2,000 years ago. Previously, it was thought that Jews lived in villages, not on farms. No other farms had been found in the area. It has been posited that the farm might have belonged to a rich Jew from Tzippori. The farm was thought to have been destroyed by an earthquake some 1,700 years ago.

Kibbutz members now hope to have the mikveh become the center of an archaeological park, perhaps even affording visitors the opportunity to actually dip into the 2,000-year-old ritual bath. The Israel Antiquities Authority has offered to move some of their stored pieces to the park when it is finished. ("I'm hoping for a sarcophagus!" said Anat.)

"We have a Facebook page ("Saving the Ancient Mikveh") and are planning another crowd-funding project, so that we can refurbish the mikveh, roof it over to protect it in winter, and establish the park. This could be a wonderful tourist site for this part of the Galilee," said Anat. "But there is still a lot of work to be done."