Meze and pita on the menu with short stories as dessert 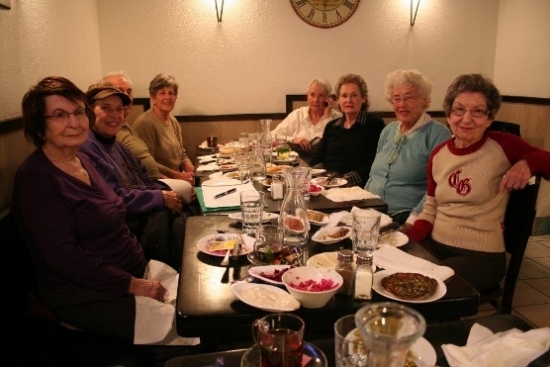 The cry comes from one end of the long table: "Please pass the tabouleh!"

"Did we order humus?" That'll be Alice.

"This is delicious. What is it?"

Food is, of course, important. As important as the short stories? Possibly.

The ESRA Tel Aviv Short Story Discussion Group meets at 17:30, the second Monday of every month – no breaks, except for the holidays. For the first years of its life every meeting included a debate about the food. Should the stories be discussed first, and then we'd turn to the eats? Yes, we agreed solemnly. It didn't work. Ever. We'd arrive at the apartment venue for the meeting and food and drink would be displayed on the table. Who could resist a nibble here and another there? What about a cup of coffee before getting to the story of the month? Oh, look! Shirley has strawberries and cream (summer); and soup (winter). Norma has a cheese, onion and tomato quiche. Noah offers latkes (Chanukah). Nomi brings omelet swirls. Sometimes there was so much to eat that we scarcely had time for the stories.

On a regular basis Noah, the chairperson, said: "I must point out that the person whose apartment we're at should provide only tea, coffee, a plate of biscuits and perhaps something savory. We'll all go home and have a proper meal." Hmmm.

For various reasons we no longer meet in people's homes. We have a meeting place in a restaurant, and discuss the stories after being served pitot, meze and drinks. The restaurant is central, on a number of bus routes and has a parking ground next door. Which means that members of the group are not confined to Tel Aviv. A few come in by bus or by car from outside the city.

The Group, the first ESRA social group established in Tel Aviv, started in 2000. Why short stories? Because they're easier to find time to read than a whole book - and a lot cheaper.

When the Group started, the idea was to read stories originally written in English. But so many good writers in other languages are at work, and are being translated into English, that now any story, no matter the original language, may be chosen.

First a quick whip-round is done of the reactions of everyone to the story. This is not more than two brief sentences, ensuring that each person present has the opportunity to say something. More detailed discussion follows. It's amazing that a particular three-page story may take one hour of discussion and argument, while a 12-page story can occasionally be dismissed fairly rapidly.

Since 2007, Ang-Lit.Press has brought out four books of short stories in English, set in Israel - Jane Doe buys a Challah, Tel Aviv Short Stories, Israel Short Stories and Love in Israel. Each book has provided the Group with up to four stories for discussion.

Some of the writers read in the past three years:

Our upcoming stories are by William Trevor, Jhumpa Lahiri and Nicole Krauss.

The Group has 16 members, and there's a waiting list. The ideal is 12 members.

Other ESRA communities have expressed interest in starting their own short story groups. The Tel Aviv Group is more than willing to share its stories.