Love in the Age of Corona 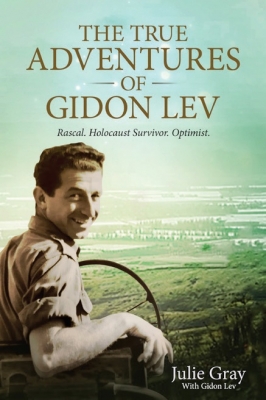 Facebook gets a lot of flak but I have to admit I enjoy reading posts – and not just because of the greetings I get on my birthday. I love peeping into the lives and opinions of people I know, or knew eons ago, or sometimes don't even know at all. I am often cheered by what I read: people marching in protests or raising money for refugees, planting gardens or adopting dogs. In these circumscribed times, anything that opens horizons is good.

I'm not sure how I became "friends" with Julie Gray because we have never actually met, but we are both writers, so that may have been the original contact point. Julie writes prolifically on Facebook, and I was charmed by her openness and willingness to share, well, quite a lot, including details about a romance with a cheerful soul called Gidon Lev, whom she calls her "Loving Life Buddy".

It's not your typical relationship – he is 85 years old and she is in her 50s – but age appears to make no difference to this couple who share a willingness to embrace whatever life has to offer, a sense of resilience and a love of adventure. This is a guy, after all, who celebrated his most recent birthday zooming down a zip line (not Zooming on a computer, but for real.)

They met when Gidon was looking for a writer who would undertake the huge project of writing a book about his life. Initially hesitant, Julie finally agreed. It took three years and in June, the book, called aptly The True Adventures of Gidon Lev – Rascal. Holocaust Survivor. Optimist was published.

And what a tale! Gidon's is a life with a message: "You don't get the life you want. You get the life that you get." The corollary is that you'd better make the best of that life, because that is all you get.

As Julie writes, "The True Adventures of Gidon Lev is about living through dark times and uncertainty and taking chances. It's about reinvention, resiliency, and joy. It's also about one of the most colorful characters you'll ever come across; there is absolutely nobody like Gidon Lev."

Gidon, who was born in Karlovy Vary, in Czechoslovakia as Peter Wolfgang Löw, spent the years from age 6 to 10 in Theresienstadt, one of an estimated 92 children who survived the camp. His father died in Auschwitz, as did many other family members.

"I have seen people almost genuflect before Gidon when they find out he is a Holocaust survivor," writes Julie. "He is suddenly a saint, a relic, or both. I think I did that at first, too, before I came to know him in all of his complex, flawed, sometimes hilarious, opinionated humanity. The Holocaust does not define him."

Gidon's life continued to be turbulent even after he and his mother were liberated in 1945. They returned to Karlovy, then moved to New York, then to Canada. In each place, Gidon had to start all over again; a boy who was a lonely outsider in a society that at that time was just beginning to understand what people who had survived the Holocaust had endured. What saved him was his involvement with the HaShomer Hatzair youth movement, which gave him comradeship and meaning in life. He was determined to go to Israel and live on a kibbutz. That would be his life's purpose.

Today, he is ambivalent about the strict ideology of HaShomer Hatzair that he once believed in so passionately. He says, "HaShomer Hatzair had too dogmatic an approach and that cost us dearly. We suffered from the damaging dogma that we must become tillers of the soil and hewers of wood, not doctors."

In 1959, he came to Israel, joined a kibbutz, taught folk dancing, and worked in a dairy among many other tasks. He served in the IDF, fighting in the Six-Day War, and in 1964 married an American olah with whom he had two children.

Then life got crazy again. The couple divorced and Gidon's former wife took the children to the United States without telling him. Determined to bring them back, he hired a detective, set off for the US himself, and in an operation that would seem wacky if it weren't so sad, located them in a supermarket parking lot and stole his son back, leaving his daughter behind in the chaos.

Back in Israel, a female friend confided that she was pregnant by a man she didn't want to marry and suggested that she and Gidon should marry. Why not? The marriage turned out to be a success and lasted for 41 happy years, until her death in 2012. There are 6 grown-up children today, and 14 grandchildren.

Gidon now lives with Julie in Ramat Gan and is still working, delivering flowers, in spite of surviving a serious bout of cancer.

She writes, "Because of Gidon, I am constantly reminded that life is fleeting and that real love is rare and that every moment spent living fully – the ups and the downs – is a moment well spent. I will benefit for the rest of my life, with lessons learned, patience taught, and memories made, with Gidon Lev. He has taught me to slow down and to be kinder, more patient, and more deliberate in what I say and do. He's taught me to be both shrewder and more trusting."

Julie takes a rather unconventional narrative path in this book. Instead of telling Gidon's story chronologically, the story flashes back and forth between descriptions of how they met and their lives today, historical background and descriptions of his life's events. She describes visits to places like Prague, Lidice and Yad Vashem and relates them to his story. Somehow, it all works.

Julie herself has an interesting life story, and she is now working on her own memoir – a kind of prequel to Gidon's. It is called They Do Things Differently Here and relates her experiences both before and after she came to Israel in 2012.

She was not born Jewish but converted to Judaism after her marriage to a Jewish man. "I threw myself into it. I converted to get married, but it has been the greatest gift of my life. I found I had created a Jewish identity."

Then things took an upsetting turn. Julie divorced her husband. Her best friend died and her brother committed suicide. She lost her business.

"I couldn't cope, so I thought, well, I'll go to Israel. Wonderful things will happen. And then I found myself in a bomb shelter!"

But she stuck it out, and eventually met Gidon.

"If I was looking for meaning and a purpose, I found it with the most unlikely person you could ever meet. I had to ask myself, why throw yourself into a relationship with a person who is not going to be around forever? But I'm going to go for it. This is life. I will never regret knowing this man."

It's not often you find a book that combines a memoir of the Holocaust with a sense of joie de vivre and optimism. I recommend this one.