Long in the Sleuth - A Book Review 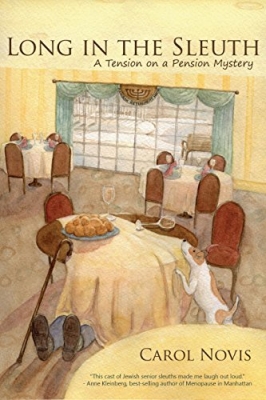 Long in the Sleuth
By Carol Novis

Many years ago, I worked at a Jewish community day center for retirees. A variety of activities took place throughout the morning, followed by lunch. At 2 p.m. everyone went to the main hall for some musical entertainment or a guest speaker, and tea was served at 3pm – without fail. I emphasize these two words because, as night follows day, from 2:45 people would begin leaving the hall to go downstairs to wait outside the dining room. There was no danger of anyone having to go home without a cup of tea, but even if the afternoon entertainment had been Frank Sinatra performing live, there would still have been the early mass exodus.

I was reminded of this as I read Long in the Sleuth, Carol Novis's debut novel, a cozy mystery set in the Menorah Retirement Home in Minnesota. The detectives in this type of crime novel are often amateur and female, and the action usually takes place in a community small enough to make it believable that the main characters all know each other. A residential home for the elderly fits the bill perfectly.

Mealtimes provide an opportunity for residents to get together to socialize and gossip while they eat. The story is narrated by Ellie Shapiro, a seventy-something resident who turns amateur sleuth. The book opens at lunchtime on a regular day when, as usual, the residents of the home have been milling around the dining room entrance for half an hour, waiting for the doors to open. "That was because lunch was a highlight of the day,"Ellie relates. "Breakfast and dinner were the other two highlights."

We are immediately introduced to the cast of characters at the Menorah. Sam Levin stands out as "that rare and coveted individual, the eligible widower". This lunchtime, the menu consists of brisket and knishes, which are baked savory pastries with a variety of fillings.Unfortunately, Sam drops dead moments after eating a knish that has been made by Ellie. Not only does food play an important part in the residents' lives, it might be the cause of Sam's death. Did he have a heart attack, or was the knish poisoned?

The scene is thus set for Ellie to investigate, together with her new friend Riva, a Holocaust survivor with an unruly dog called Schultz, and Noah, a grandson of the recently deceased Sam. There is also some romantic interest for Ellie in the shape of Hal, who lives in an apartment complex nearby and runs the local Community Archive.Fun, mayhem and drama ensue as the story unfolds with more red herrings than you get in smorgasbord. Carol Novis doesn't shy away from describing the downside of living in a retirement home, but she does so with warmth and humor and, through Ellie, she shows us the value of friendship and laughter as we age.

Over the past few years, cozy mystery writing, very popular in the 1920s and 1930s, has undergone a renaissance. Long in the Sleuth is a very pleasant addition to the genre. The book ends where it begins, with food, and a selection of "Ellie's recipes" including, if you dare make them, knishes.