Oct 22 Posted by ESRAmagazine in People 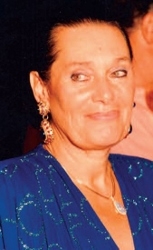 Linda Isaacs, who has died at the age of 78, was a passionate campaigner for Soviet Jewry. In England she was a great activist first with the 35s organisation, and then on the National Council which she founded.

After making aliyah 27 years ago, she worked in Israel for Soviet Jews trying to settle in this country, for ESRA and for Tel Aviv University.

This was all a far cry from her humble beginnings in Liverpool where her father left the family when she was very young. He was never to be seen again, leaving Linda in the sole care of her disturbed, cruel mother. She idolized her older brother, Geoffrey, but he was always ill and passed away from asthma at 16. Her adored grandfather, Pop, rescued her from her mother and took her into his own home and undoubtedly loved her. He gave her a love for Yiddishkeit and community life.

But even in that refuge she was abused by her uncle and great uncle, her son, Brent, said in a moving eulogy at her funeral.

"This horrendous beginning would have been enough to have blighted anybody's entire life, and it certainly marked my poor mother.

"But she was a great soul. She took all this terrible negative energy and turned it around."

"As a horrible teenager, when I noticed my mother's activities in the world, I regret to say I was irritated by them. I wasn't interested in the accolades of strangers and I thought it odd that she should somehow have met Menachem Begin and Queen Elizabeth.

"But later, when I met Soviet Jews who insisted that my mother had saved their lives, and community leaders and non-Jewish political figures who expressed their great admiration and even love for my mother, I realized she was a real hero, who should have blown her own trumpet more. In fact, we should have had fanfares blown for her daily."

A woman who had been denied love, had been shown the worst side of human nature, spent the rest of her life touching everyone she met, offering love to everyone.

Added Brent: "Her love was tangible too. I don't know of all the things she did for others, but a short list would have to include years spent being a Samaritan, befriending the lonely, the desperate, the suicidal."

There were also years spent helping Soviet Jews, throwing eggs at Russian officials and getting herself arrested and deported from Eastern Europe.

Linda was an organizer of networks of other people, all out doing good in the world.

Brent went on: "We didn't blow fanfares. We took it as normal that she made my father Eric's family feel they were her family.

"That Auntie Linda or Grandma Linda should be a towering figure and have special relationships with every individual; that cleaning ladies and au-pairs and greengrocers, butchers and bakers and rabbis should all feel they had some special love thing going on with that charismatic lady.

"It helped that she was so vital, so charismatic, funny, clever and, above all, warm. Few could resist. I know I couldn't."

In an emotional eulogy, her 15-year-old grand-daughter, Arielle, said: "You've really inspired me and given me such great advice, and no matter how much pain you were in, you always kept your sense of humor.

"I miss the times when we both made loads of vanilla butter biscuits, and chocolate log cake.

"I miss the times when we went walking on the beach to collect shells so we could make necklaces for each other.

"I miss the times in your old flat when I sat on your lap in your comfy chair and we pretended we were in the jungle looking at the animals. I will miss celebrating birthdays with you.

"I miss your rolly polies with jam and chocolate. And playing card games with you and gramps. I miss sleeping over and going down to the pool with you. I will miss so much about you and being with you."

She added: "You had such a bursting personality and you were always so full of life.

"You have given hope to so many people and you have inspired me with your strength and taught me some very important lessons about life.

"One of your greatest skills was understanding people and you knew what I was going through just by seeing my face.

"Thank you for leaving a mark in this world and making it a better place."

Linda's good friend, Linda Silverstone, said: "We met soon after she made aliyah and clicked immediately. She was my kind of woman. 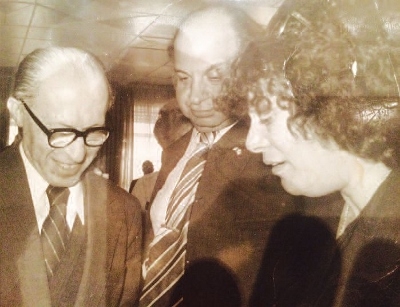 "Of course, I didn't know Linda in her feisty, campaigning days for Soviet Jewry; that was all behind her when we met.

"She had now turned her intelligence and knowledge to ESRA projects, and I well remember us many years ago laughing in my "office", which consisted in those days of an ironing board in the spare room, when we were folding leaflets, making them ready to insert into ESRAmagazine.

"Many years later we delivered the magazine bundles, which always seemed to necessitate our driving around in circles trying to navigate the one-way streets and ending up back at the same place. We could never get it right!

"Linda was a true friend in every sense of the word. She was always willing to give and be there and expecting nothing in return. She helped me through the darkest periods of my life, dispensing her wisdom, knowledge, support and good advice.

"With both of us having the same name, we always referred to one another as "the other one" when asking to speak to each other on the phone.

"Linda was always ready to go out, be it just for coffee in the square or to the cinema, a fashion show or a lecture, the theater, the opera – anything we 'gals' liked that didn't appeal to our menfolk.

"We talked a great deal, and seemingly never ran out of things to discuss. Saturday nights will never be the same for us without our playing bridge with Linda and her husband Eric.

"She was my 'friend round the corner', always there, solid and dependable and totally reliable. Her wonderful sons, Jeffrey, Brent, Jason and Damien, had a star of a mother.

"As a friend she was a star which will always shine and I will miss her forever."

Former ESRA director Liz Bennet Trakeniski said: "I first met Linda in 1980 when we were both active in the Soviet Jewry Campaign in London. Linda cut a forceful, eloquent and focused campaigning figure with that vital amount of compassion influencing many in the UK Reform Movement to action.

"Our paths crossed again when she became active in ESRA, particularly on the fundraising committee.

"Linda brought her considerable experience to ESRA and she became synonymous with the annual golf tournament which not only raised funds for social projects but brought ESRA to the attention of a section of the Israeli community previously beyond our reach.

"On a personal note, I will remember marveling at her ability to recall a one-liner or joke, usually translated from Yiddish, suitable for any occasion she might encounter.

"That ability to recall was also applied to her caring as she remembered in great detail matters discussed and was able to offer words of support or comfort when appropriate.

"Linda, a Liverpudlian at heart, will be missed for her straight talking, no messing, caring and, more often than not, mischievous humor."

Tributes have also come in from two ESRA volunteers.

Adele Rubin commented: "Linda was the Chair of the Herzliya ESRA branch when I was Chair of the ESRA branches and worked closely with her. In her report about the branch in January 1998, there was an amazing range of activities, both social and in the general community.

"Linda cooperated with the Herzliya Municipality volunteer roof organization, particularly in the Food for the Hungry project, for which she supplied volunteers, collected food and raised money."

And Renee Goldstein said: "Linda and I organized ESRA bridge mornings, golf tournaments, evenings in Herzliya Pituach and food packages for the needy in Herzliya.

"Linda was 'Johnny on the spot', always ready to lend a helping hand. She had creative ideas and was a devoted and true friend. She will be sadly missed."