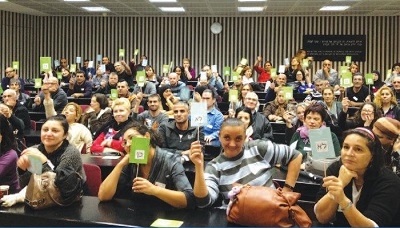 Each year, as summer turns to autumn and the heat goes out of the sun, the evening news carries facts and figures of students returning to universities. The very word conjures up magical scenes of learning and privilege – the Latin universitas magistrorum et scholarium - a community of teachers and scholars - evokes mind-opening tutorials and door-opening knowledge.

But what about those that never make it through the gates?

Some thirteen years ago, when a young law-student named Adi Koll was studying at the Hebrew University in Jerusalem, she got to thinking about the have-nots who don't get to enter the hallowed lecture halls of learning, and decided to change the status quo. No sweat; she approached the Dean, who provided a utilities room where toilet paper was stored. Next step was to stand on the street where kids at risk gathered, megaphone in hand, and bellow "Who wants to study at the Hebrew U?" Then she enlisted fellow law-students to teach introductory courses and voila, the seeds of "Universita Ba'Am" were sown.

Student and teacher at the end of the law course at the Hebrew University.

At the end of that year a ceremony was held where teenage graduates invited their parents to the university to "shep nachas". Except it soon became clear that many of the adults were not really impressed. "I don't understand why my son is wasting his time here," one disgruntled father complained. "He should be working."

Koll realized that the problem with kids-at-risk was actually their parents. OK, she decided, she'd educate the parents. Armed by then with an LLM and JSD in Law from Columbia, Koll approached the president of the Tel Aviv University, obtained funding, and started working. Her aim was to educate adults between 18 to 55 years old, with no more than 12 years of education, who knew enough Hebrew to follow the lessons. The only other criteria was being clean of drugs and alcohol.

Today, Universita Ba'am, (an "Access for All" program), operates at the Hebrew U, Tel Aviv, Ben Gurion and Haifa Universities with 2,400 participants studying courses in Law, Psychology, Medicine, and Business. Almost 100 second-year students act as teachers in the program, which costs around five million shekel each year to run, and is funded mainly by donations with a little government support. Tutoring costs are 3,000 - 4,000 shekel per student; each participant in the program pays a symbolic 250 shekel a year to show commitment. With student teachers getting 7,000 shekel towards their own university expenses, or eight points of credit, the system is an ongoing win-win celebration.

Student-teachers collaborate with Municipal Welfare Departments and Law-Enforcement Officials to recruit participants from all over Israel. Secretaries and cleaners, cosmeticians and supermarket cashiers, Jews, Muslims, Christians, religious, ex-religious, secular, new immigrants from Russia and Ethiopia, and anywhere in between, mingle in the finest lecture halls on campus, learning from Arab and Jewish student-lecturers. Israel being Israel, there are always complicating issues: Haredi women have been known to suggest a male-free class; a request that is always politely but firmly denied.

Universita Ba'am is a festival of learning: free busses ferry participants to their weekly evening lessons which start at 6.15pm and end at 8pm. That's a hungry time of day: coffee, tea and sandwiches greet the students on arrival; complimentary notebooks as well as student cards are distributed. And the learning is fun: attendance is mandatory but there are no exams or homework (except for extra keen students who request it), movies (with popcorn) about relevant topics are screened and discussed, field trips to the Supreme Court and the Weizmann Institute bring participants eyeball to eyeball with top judges and scientists who answer their questions and schmooze. 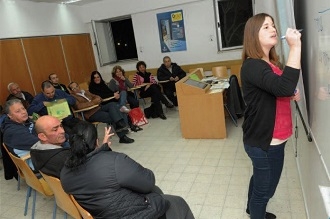 Seat of learning ... a psychology class at Tel Aviv University.

Mock trials, debates and student presentations together with engaging lectures and good food—if your phone rings in one class you bring a cake to the next—inevitably turn the groups into a small family. But Universita Ba'am is more than a social get-together: according to Lior Symon, a coordinator of the program, tutors that care and WhatsApp groups where people can post academic articles and discuss philosophical questions—sometimes for the first time in their lives—empower the students to feel intellectual and respected and important members of society. "Many participants never finished high school," explains Symon, a third-year law-student herself, "this experience is a huge and healing Tikkun". So far, 19,000 participants have graduated from the courses, and the numbers are growing each year. Teams of four teachers work in tandem with local municipalities to concentrate on how participants can make a difference—the aim is to create a more equal society where the traditionally weaker citizens can take control of their lives to a greater extent. Knowledge is power; by connecting the universities to the people, the whole country can become more powerful.

Students can stay on in the program for three years. Certificates are granted at a celebratory ceremony at the end of each year where beaming moms and dads 'graduate' in front of their kids. Summer courses, which cost 100 shekel each, include English, Art, Positive Thinking, and Hebrew, and students can take as many of these as they like. And at the end of three years, outstanding students are offered a scholarship to Ariel University for continued education.

Adi Koll—blond, blue-eyed and gorgeous—could probably have been a model or a Hollywood star. Instead, she is a different sort of Wonder Woman—a force for good who has lectured at the universities of Tel Aviv and Ben Gurion, been a member of Knesset for Yesh Atid, and hugely improved the lives of thousands and thousands of Israelis. At the University of Life, she surely gets only straight A's.