"Everyone in tears, little children grasping their mothers' skirts not understanding what was going on, older ones trying to keep a stiff upper lip, and be brave," wrote Daisy Roessler-Rubin, describing the day in June 1939 that she left Berlin on the Kindertransport. "Only two adults were allowed to see us off and we had to say our goodbyes in a special waiting room. I was twelve years old." Daisy wrote these words for an article in ESRAmagazine in 2011, one week before she died. It is our good fortune not only that she bore witness to her wartime experiences by writing beautifully and prolifically throughout her life, but also that she kept many original family documents and photographs, and the suitcase – so emblematic of the Kindertransport - that she was allowed to bring with her.

Daisy pictured in Marienbad in 1936

This is the first year that Daisy's daughter, Susan Herold, will be marking the anniversary of that departure from Berlin without her mother's amazing collection of memorabilia. Earlier this year in a moving ceremony, Susan presented the suitcase, her mother's precious scrapbook and dozens of family papers and photographs to Yad Vashem.

"Over the years I have donated hundreds of documents, including many that belonged to my grandparents, Samson and Ettel Rubin," she says. "My grandfather kept everything dating back to 1911."

Born in Poland, the Rubins lived in Austria for a number of years before moving to Berlin in 1932. In her memoir, "And Then There Were Four", Daisy described the anti-Semitism she encountered at school. "Our teacher was a youngish, blonde woman who had a very large brooch graced by a swastika pinned to her ample bosom. She never spoke normally to Jewish children. Instead, she shouted at us and made us look foolish. During Bible studies, Jewish children had to stand outside the door and were not allowed to talk."

In 1935, Jewish children were banned from studying in German schools and Daisy moved to a Jewish school. She was relieved to be in a Jewish environment because, she wrote, "As a Jewish child in pre-war Nazi Germany, I felt like I was standing in front of a closed door, with everyone enjoying themselves while I was unable to participate." 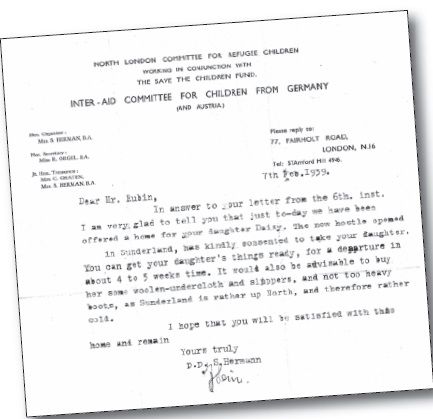 The 1939 letter offering Daisy a home in ‘cold’ Sunderland

Alarmed by the increasingly frightening atmosphere, the Rubins tried to find a way to leave Germany. Following the horrific Kristallnacht pogrom in November 1938, they heard about a scheme to send children to Britain on their own. One item in the collection donated to Yad Vashem is a letter Samson Rubin received from the North London Committee for Refugee Children from Germany and Austria. Dated 7 February, 1939, it states: "I am very pleased to tell you that just today we have been offered a home for your daughter Daisy." The home was a new hostel in Sunderland. Samson was advised in the letter to make sure Daisy brought warm clothing. "Sunderland is rather up North, and therefore rather cold."

The hostel accommodated twenty-eight girls in all and was established by Rabbi Dr. Solomon Schonfeld, with support from the Sunderland community. Daisy recalled the girls crying themselves to sleep at night. Letters from home were eagerly awaited. "Gradually everything changed," she wrote. "At first letters would still arrive, but then they got fewer and fewer until they stopped altogether. Most of the girls never saw their families again."

Daisy was, she herself acknowledged, "one of the lucky ones." In August 1939, just a few weeks before the start of the war, Samson and Ettel and their two-year-old son Lion (Bob) managed to leave Germany for England. Bob Rubin, who still lives in London, was at the Yad Vashem ceremony and he, too, acknowledged the family's good fortune. Their exit visas were provided by Frank Foley, a British spy serving as the passport control officer in the embassy in Berlin. At great personal risk, Foley used his position to issue more than 10,000 illegal visas to Jews who were trying desperately to escape. The family only found this out in 1999, the same year that Foley was recognized as a Righteous Among Nations by Yad Vashem.

Bob also acknowledged his parents' courage in letting Daisy go. "I can't know how hard it must have been for them to send their daughter away on the Kindertransport, not knowing if they would ever see her again." Daisy stayed in the hostel until August 1942, when she went to join her family in London. "We went to King's Cross Station and this young woman approached us," Bob recalls. "My parents told me it was my sister. She was still only sixteen. It's the first memory I have of meeting her."

At the ceremony, Dr. Haim Gertner, director of Yad Vashem's archives, spoke about the importance of the "Gathering the Fragments" campaign, which aims to collect Holocaust-era documents, photographs, artwork and other items that are in danger of disintegrating with age if they are kept in private homes. "Yad Vashem is in a race against time," he said. "We collect over a thousand survivor testimonies annually to help people learn about the Holocaust – not just as a historical event but as something people lived through. The Nazis not only murdered the Jews; they wanted to wipe out their memories. We work to restore these memories, to honor the Jewish people and to teach the coming generations about what happened."

Proof of this endeavor is Daisy's scrapbook. It was her most precious possession and the item Susan Herold says she found the most difficult to give away. "It contained notes, poems and drawings by my mother, her teachers and all the friends she grew up with. It was my mother's only link to the past so it was hard for me to let it go. But most of those friends did not survive the Holocaust and left no record behind. What they wrote in the scrapbook is the only remaining testament to their lives."

Susan initially felt a sense of loss after the ceremony at Yad Vashem. "Now, a few months on, I feel less bereft," she says. "As my family commemorates eighty years since my mother left her home in Berlin, I know how fortunate we are that she was able to share her story with us. And I know how important it is to preserve her scrapbook, photographs and documents for future generations." 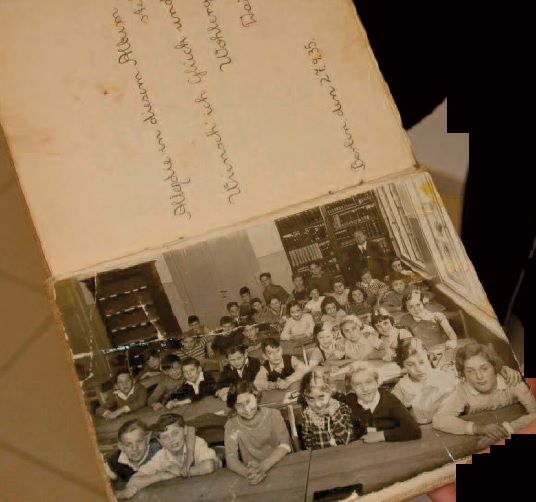 Daisy’s precious scrapbook ... she is pictured third from the left in the photo taken in Adath Yisroel School, Berlin, in September 1935
Tags:
Daisy Roessler-Rubin
PRINT