Kids on Block are Mentors 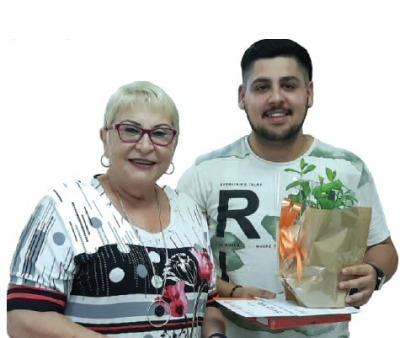 We have just closed the second year in our project "Ach b'Kehila" in Rishon leZion of students mentoring "inner city kids on the block". The name in Hebrew has a double meaning – one is "Brother in the Community" and the other is the initials of

The project is run together with the Rishon Municipality and under the supervision of ESRA Rishon leZion headed by Janet Kiesari.It started with just six students, each mentoring two to three kids from the distressed areas in the city.Last year, we grew to eight students, and this coming year, due to the recognition and participation of the Rishon Academic Institute, we will be giving scholarships to many more students.

At the end of the second year we received, through the Municipality, letters from several of the students – and I believe these letters speak for themselves and show not only how the children are being empowered but, to no less degree, the students too! Here is a sample:

My name is Ziva and I am a graduate student in political science.

I wanted to share with you the experience I have undergone in the past year in mentoring and to thank the 'Ach B'Kehila' project for the opportunity.

The two girls I brought up are very different from each other and the only common denominator between them is age and place of residence.

It was very difficult to bridge the gaps between the two girls because one was very open and talkative and the other shy and introverted (it takes her a long time to manage a conversation, and she prefers to write).

In more and more of the meetings I felt that that I was succeeding and my sense of satisfaction was tremendous. Watching them play together on the beach, braiding one another's hair or curling up in front of a movie on television, just warmed the heart. The connection between them was important to me. I was also able to see what their emotional state was, and find out what was happening at home. At the meetings (which happened occasionally) where only one of the girls came, I was able to have more intimate conversations, but always with the cooperation of the girl and understanding of her wishes and limits. During the year, I saw that there was a great improvement in both girls in their studies, communication skills and the development of social skills.

I have learned a lot from this experience and I hope I have given as much as I received from this project.

Again, thanks for the opportunity to touch a child's life and perhaps even positively make an impact.

My name is Eli and I am a law and communications student at the Academic College of Kiryat Ono.

I began my process with the project, knowing that this time it would be something different, a project of mentoring and being an example to the younger generation not from a learning perspective, but through social activities and communication. The goal is to develop social skills in the children and enable them to develop friendships in school and in their communities, to believe in themselves and their abilities, unconnected to race, gender or nationality.

I received three wonderful children, each from a different background. From the first session we started to piece together the puzzle through creating and initiating. We played many introductory games so that they could understand that even if they did not know each other yet, they still had a lot in common. At the same meeting I prepared an individual page for each child to complete stating one goal they expected to achieve though the mentoring. From meeting to meeting I could see each child's character in the relationship towards his friends, whether it was in giving, in a push for success and excellence, and sometimes in a concession for the group.

I understood, after six months, that they awaited each meeting impatiently (the parents' response) and realized I could do more.I went back to the notes of the first day we played introductory games and found that there was a common denominator in all their requests – improve their reading! I found a reading program, combined with activity, and we had a series of individual and group training sessions on the subject. It was amazing to see two children of the same age, with one having more difficulty and the other pushing him and encouraging him to succeed.

There is no doubt that my sense of satisfaction and self-confidence has increased, and today at the end of the project I feel proud that I know that each of them is waiting for the next meeting and is ready to be an active participant in it.

Seeing the smile on their faces and realizing that you have a part in it is worth everything.