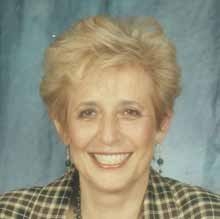 It is several months since my cousin and beloved friend Judi Back died, and I still can't quite believe that I'll never see her again. It seems impossible that such a vivacious person, such a life force, has gone. Judi's vibrant personality and warm, caring nature meant that it was never anything less than an absolute pleasure to be with her. And it means that there is now the most terrible void in the lives of her husband, children and grandchildren in Israel, her mother and sisters in the UK, and her many friends in both countries.

Judi was born in London in April 1945. She grew up in the suburb of Willesden and in 1967 she married Johnny Back. The young couple moved to Bushey Heath and immediately made their mark on the local community. Judi is still remembered for the hospitality she showed to everyone. Her home was open to countless visitors on Shabbat; she hosted Sedarim for thirty to forty people, many of whom had never before experienced a proper Seder, and she organized many charitable functions, always with infectious enthusiasm and attention to detail.

That sense of caring was evident in everything Judi did. She was one of the most thoughtful people I have ever known. Nothing was too much trouble for her, if it would help another person out. Her considerate nature was evident in the gifts she gave people on every type of occasion and for all sorts of reasons. And no gift, whether large or small, was ever bought by Judi without enormous thought as to the likes and dislikes of the recipient, or how it would fit into their home.

Mention Judi's name to anyone who knew her and the expression that constantly comes up is that she was a real "people person", and that describes her perfectly. She loved being with people: family, old friends or the very many new ones she made in Israel, and she loved nothing better than to entertain. During less happy times, Judi wouldn't think twice about staying overnight at the bedside of friends who were in hospital if they needed someone to be there. And she never forgot a kindness that anyone showed her.

Judi and Johnny came on aliyah with their four children in 1982, settling first in Raanana. Judi used to say that even though she had been born and brought up in London, she never felt completely at home there, and that Israel was always her ultimate goal. In Israel Judi worked in various fields before discovering that she had a particular talent for teaching English as a second language. When she was in her fifties, she bravely decided to change the direction of her life, working long hours at Berlitz and studying hard to gain the prestigious Cambridge Certificate in English Language Teaching. She went on to become one of the best teachers in her field. Judi taught for a number of years at the British Council and, through ESRA, she also used her skills on a voluntary basis in a school in Tel Aviv. Initially, the organizers of the program at the school didn't realize that she was a teacher and thought she would just speak to the students in English to improve their spoken language. They soon saw how good she was and asked her to teach the Bagrut students who needed extra help. She loved working there.

She was so happy in the apartment in Petah Tikva that she and Johnny had planned together lovingly and meticulously as the home they would enjoy for many years to come. Family life was of paramount importance to Judi. Every Friday night her home was a blaze of lights, as she lit a candle for each of her four children and eight grandchildren, and she bought a special many-branched candelabra to accommodate them all.

In recent years Judi and Johnny hosted a Yom Ha'atzmaut barbecue which had become a much enjoyed annual tradition for their many guests. It was soon after the barbecue last April that Judi suddenly became seriously ill. I saw her for the last time in July, just a few weeks before she died. Although very weak, she enjoyed sitting with a few visitors at a time in her beloved garden and she was as warm and welcoming as ever. She will be so greatly missed.

The Judi Back Scholarship Fund

Because Judi loved teaching and was wholeheartedly committed to her students, her family and friends have established The Judi Back Scholarship Fund to commemorate her name by supporting the work that meant so much to her.