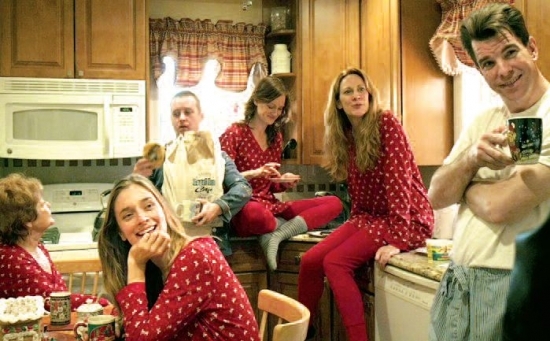 Family truths are laid bare in The Fitzgerald Family Christmas

What's a New York family without Jewish guilt? Try a Catholic dysfunctional one. This theme is splendidly tackled in Edward Burns' new film, The Fitzgerald Family Christmas. Although the plot is familiar – a family getting together to celebrate Christmas – Burns' witty dialogue and multifaceted characters are anything but.

As is customary, Burns shoots on location in his native Queens neighborhood as well as in Long Island local spots using many of the same actors that have appeared in his other films. The story is about seven siblings who come from a working-class, Irish-American family. For the most part, they are candid and funny. Erin (played by Heather Burns), whose Jewish atheist husband isn't too keen on having a Christmas tree, tells him, "Big families are overrated." He replies, "Especially yours." Sharon (played by Kerry Bishé) and her brother Quinn (Michael McGlone) are brash, foul-mouthed, and egocentric. They have no qualms about skipping out on their mother's 70th birthday to party in the Hamptons. However, in doing so, they fretfully repeat, "We're doing the right thing," even though they know they aren't. Sharon also avoids pondering too deeply about why she has affairs with much older and wealthier men who may be filling a temporary void for her deficiencies.

As the oldest sibling, Gerry (a sort of surrogate father figure played by Burns), feels guilty about his family's selfish behavior towards their mother even though he contentedly lives with her. Dottie (played by Marsha Dietlein) tries to cope with her unhappiness as a housewife and inexorable infidelity. Cyril (played by Tom Guiry) is humiliated about his drug rehabilitation even though he seems to be making progress, and Connie (Caitlin FitzGerald) is ashamed to admit that her unemployed boyfriend is outright abusive, especially when she tells him she is pregnant. At one point, Gerry confides in his new potential girlfriend, Nora (played by Connie Britton), about the trials and tribulations of getting his "crazy family" together for a reunion She asks him, "Can't you let your brothers and sisters figure it out for themselves?" and later confirms, "You're gonna need a drink."

Unlike other family comedy dramas, writer-director Burns avoids being sappy and contrived. This is not a Capra-esque (It's A Wonderful Life) holiday family movie. Instead, the filmmaker tastefully toys with our emotions and draws sympathy for his characters by breaking down family stereotypes. Although Sharon and Quinn appear to have rough skin, they have a soft spot for their family and try to offer sound advice (which, of course, they don't follow). They are clearly with the wrong partners but cannot fully realize their repetitive, self-destructive cycles. Gerry may be a momma's boy, but we learn that he lost his fiancé in the terrorist attacks of 9/11. Rosie (played by Anita Gillette) is a tough Irish-Catholic mother, but she adores her children and has a hard time getting over the fact that her husband left them 20 years ago.

Near the denouement, a powerful scene depicts Jim Fitzgerald (played by Ed Lauter) learning humility by apologizing to his children for having walked out on them. He sees more clearly the emotional damage he has caused. Jim asks for forgiveness and implores them to persuade their mother to allow him to partake in what may be his last family Christmas. Jim shares that he has pancreatic cancer but only some of his children show compassion, while a few do not wholeheartedly believe him. Instead, they wear bitter scars on their sleeves. It is no wonder that most of the Fitzgerald siblings have chosen disloyal and self-centered romantic partners.

All things considered, the family is not without a droll sense of humor. Many scenes offer laughs without trying too hard (unlike many comedies today). When Quinn asks Gerry to understand their father's point of view regarding career ambitions, he says, "I'm not taking sides … he made the wrong choice, clearly." Early on, Sharon's boyfriend says that he would like to meet her sister and she tells him, "I don't think you would; she's over 30." Sharon then reminds Quinn how mean he was to their youngest brother, Cyril. He replies, "He was my little brother; it was my duty to abuse him all the time."

In another scene, Rosie sneaks her half-Jewish grandchild off to their local priest (played by bestselling author Frank McCourt's brother, Malachy) for a secret baptism. However, she summons the strength – out of love for the children – to forgive her selfish husband who abandoned the family decades ago. Nonetheless, she sternly tells them, "Well, if I do forgive him, I might have to borrow your pistol … I mean it."