A Tribute to Varda Mendelsohn 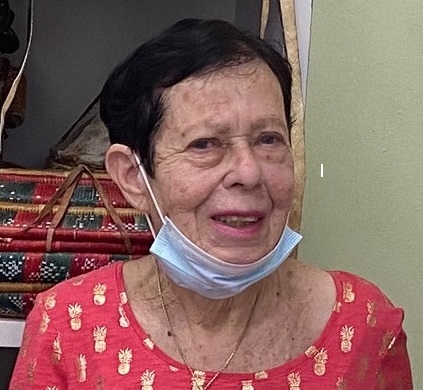 Varda Mendelsohn has been the sewing teacher for our Ethiopian sewing centers in Netanya for the past 26 years.

These centers were started by Merle Guttmann, our amazing Life President, when the first Ethiopian immigrants arrived at the caravans in Beerotaim, a moshav near Netanya. The inspiration for the first center came from Esta Azouz, who started ESRA's first knitting club.

From there, when the immigrants moved to Netanya, so did the sewing centers and that's where Varda first became involved. 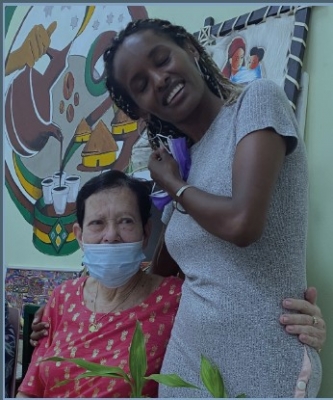 Belaynesh, the youngest participant, with Varda

When the centers moved to Netanya, they were situated in the not very comfortable underground bomb shelters in Kiryat Nordau and Hefzibah. Over the years, they were eventually given places at the Community Centers in Hefzibah and Neot Shaked, where they are still vibrant today.

Varda has been not only a sewing teacher, but a confidante and encouragement to all the men and women who came to her classes. first the majority of sewers were men who came to her to learn some kind of profession that they could earn small amounts from working at home mending clothes. Some of them became the main sewers of the Ethiopian Embroidery Project items with Varda as the go-between, handing out the work and making sure it was done well. Remember those lovely eyeglass cases, purses and handbags?

The embroiderers were from all over the center of Israel, and much of the sewing was done in Varda's classes. These classes also became a social group for the men who were all new immigrants with few skills to work in the Israeli society. The group was a lifesaver for both them and their families, as it gave them a place to go a feeling that they were helping to support their families by sewing their own clothes and a place of support with Varda.

Gradually, as the men became more competent in Hebrew and their surroundings, the centers became more female-oriented and today they are thriving centers for all ages and for a real mix of nationalities. 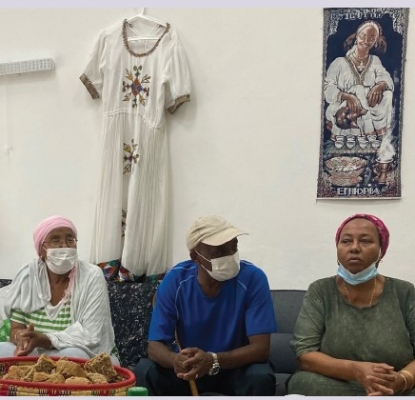 Some of the sewing students at the party

Varda has finally decided to retire after 26 years of being such a meaningful part of the two communities who have been lucky enough benefit from her skills, support and mentoring. The sewing centers will continue with two new teachers, both young and at the start of their careers. They have much to learn from Varda who has offered to help whenever needed.

At the small farewell party, we held for Varda, she was inundated with gifts from the sewing students both individually and collectively. The words they wrote her say it all:

Many women make a difference, and you have done more than any of us. There are those who build buildings, there are those who build homes by making "shiduchim", but you were able to build many homes of seamstresses. You taught us how to come out of our homes well dressed and looking good – each of us individually. You showed us the way to improve ourselves and our lives. You taught for many years, always with patience and caring.

So, there is only one thing left for us to do. To thank you and tell how much we appreciate everything you have done for us and for all your students throughout the years. On your retirement we wish you many more years of pleasure, joy and happiness."

And a huge thank you Varda from your ESRA family.