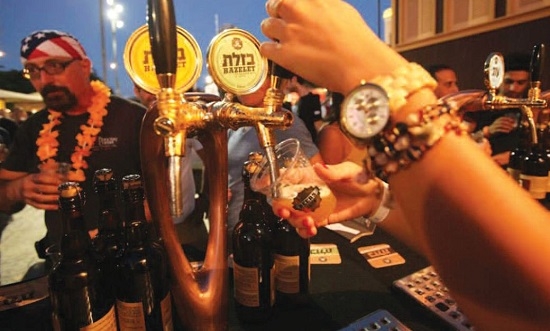 Summer's here in Israel and it is long and often sweltering. Not everyone will want a glass of wine or spirit when they can choose from an endless stream of ice-coldthirst quenching premium beers.Dozens of local craft brewers are bottling about 100 Israeli Pale Ales, Stouts, Porters, Wheat Beers and an exhausting array of other variations providing an intoxicating amount of reasons and ways for beer lovers to celebrate.

Since launching the Israeli craft beer scene in 2006, the Dancing Camel, based in Tel Aviv, isn't just a micro-brewery anymore but also a venue for music, comedy and beer bashes with a suds- friendly kitchen. With a current range of 16-year-long and seasonal beers, their use of local ingredients make their beers some of the most intrinsically Israeli, and unlike any other you might find overseas. Favorites include their Hefe-wit - their wheat beer made with citric Mandarin Bavarian hops and coriander, its offspring Leche Del Diablo which uses the Hefe-wit as a base with added chili pepper heat, their Cherry vanilla stout, their 613 pomegranate infused beer made for Rosh Hashanah, and an Etrog beer for Sukkot. Iced versions of many of their yearly brews with over 10% alcohol are special treats as icing decreases the water volume leaving more alcohol and intense flavors to savor.

Jems Beer Factory is another creation of an American immigrant, Raanana resident Jeremy Welfeld. Jeremy, nicknamed Jems, makes a range of flawlessly executed ales and lagers and though available by draft or bottles in hundreds of locations their most prolific spot of consumption is their ever expanding chain of Jems pubs with the original location in Petah Tikva. Launched in 2009, the beer is "fresh from the vats" of the adjoining brewery. Their 8.8 with about 8.8 % alcohol or more in the Belgian tradition, their clean and crisp Wheat, their light but refreshing Amber, their hoppy Pils- their friendly family dog's moniker is Pilsner- and their IPA, an Indian Pale Ale nicknamed an"Israeli Perfect Ale", stand out and there's a seasonal berry beer slated for this summer.

Let's not think that the production and consumption of craft brews are strictly the purview and preference of Anglo immigrants to Israel. Even though the Israeli demand for commercial beers seems unabated from local behemoths Goldstar and Maccabee with locally licensed Danish sister brands, Carlsberg and Tuborg, most of the two to three dozen craft breweries Israel sports were launched by Sabras (native Israelis). 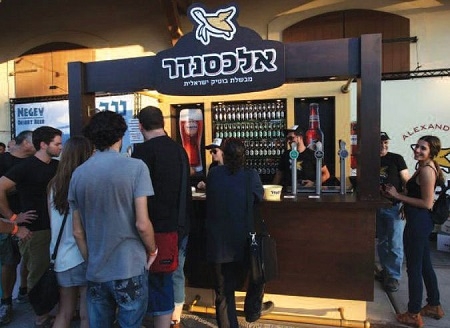 Better Israeli craft beers, like Alexander, are becoming easier to find and imbibe

The Golan Brewery in Katzrin, only trailed the Dancing Camel by months in 2006 as a venture between aspiring brewer Naftali Pinchevsky and investor Haim Ohayon. With water sourced and filtered through the local volcanic rock, their Bazelet brand of beers have benefited from joining in a partnership with the nearby Golan Heights Winery in 2009. Besides an infusion of cash, they benefit from essential distribution and the contribution of know-how of the winemakers and freelance brew masters. All their beers are expertly crafted and often winners in local and even international competitions. Favorites include a Pilsner made from three malted barleys, a dark Double Bock made from five barleys and their seasonal Og brews, especially their red Jinji lager and Wheat Double Bock.

Also from the North, literally flowing from the springs of Ga'aton, the Malka Brewery in the Galilee's Kibbutz Yechiam, has been a star since Murphy's pub founder Assaf Lavi became a man on a mission to play a major role in the craft beer scene in 2008. Malka's Pale Ale, Stout and Blonde Ale are on tap or in bottles in some of Israel's best pubs, and anytime their seasonal Red comes out it quickly disappears into delighted devotees.

The Shapiro Brewery is an effort by six brothers and their father from Jerusalem, who moved their brewing to Beit Shemesh adjacent to the Buster's Cider house and have made a meaningful impact as leaders in craft brewing. They have a full range of quality ales but their Oatmeal Stout, which is a touch sweeter and rounder than traditional stouts, and their Winter Jack,a seasonal offering laced with Jack Daniels, are two beers that provide a counterpoint to their more traditional yet special take Pale Ale. Thankfully, their distribution isn't limited anymore to just the Jerusalem metropolitan areaas they became a brand in demand nationally.This was partially due not only to the quality of their brewing, but also to innovative viral videos, including some irreverent clips made by fans.

Alexander Brewery, located in the Emek Hefer Industrial Park off Route 4, is easy enough to get to by bus (and is within stumbling distance of the Recanati Winery) if you want to go to the source of one of the most popular micro-brews finding its way into fine dining restaurants, better bars and wine shops.

As an aside - yes, more and more Israeli wine shops are featuring a better selection of Israeli micro-brews and imports that are hard to find in supermarkets (With the exception of the Tiv Taam chain which imports and distributes hundreds of premium international beers).

Back to Alexander, especially for their fruity Blazer and their award winning seasonal aptly titled Black, which is a Porter, acclaimed as the World's Best, with typical of Porter signature notes of coffee and dark chocolate with notes of expressive walnuts and dates making it one of my perpetual favorites.Their hoppy Green and smoother Ambree all have their share of loyal supporters. Brewer and owner Ori Sagyis, a soft spoken but gregarious gent, and their logo of a turtle with wings is a tribute to Uri's past as an air force pilot with the turtles commonly found in nearby Alexander River.

Though many purists might flinch, Maedan is a "nano" or even "pico" brewery that has found a niche, making small batches of gluten-free beers. One made from chick peas (garbanzo beans) would seem a natural pairing for hummus lovers since hummus uses the same source for its main ingredient, but their recently released date-based beer was well touted as an alternative for beer lovers avoiding grain-based beverages over Passover. Of course, local based hard apple ciders like Busters and Side Effect also grab a share of the grain-free Passover market.

Truth be told, the Palestinian Taybeh Brewery predates the Dancing Camel by about a decade and has become embroiled in nationalistic politics by circumstance or by choice. Situated in the village of Taybeh outside Ramallah in the West Bank, they've possibly outgrown the sense of being a micro-brew, producing well over half a million bottles a year. Their well-regarded offerings are more of a regional beer or Palestinian beer than being identified as an Israeli beer, though Taybeh has its fair share of Arab, Jewish or indifferent imbibers,who want to support Palestinian Christian enterprises as many Israelis see economic opportunities as a path towards peace.

With over a score of Israeli craft breweries fermenting premium potables, tourists and locals have a greater selection to beat the heat and wash down their meat whether it is Negev beers from the south, Herzl from Jerusalem or Ella Valley from the center, and there's more than enough good Israeli craft beer in 2016 for anyone article to do justice to though we tried.