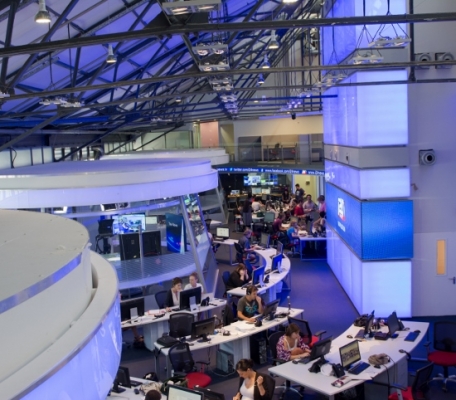 Operation Protective Edge propelled i24 News into the public eye.

For one week smack in the middle of Operation Protective Edge, when the IDF was unearthing terror tunnels in Gaza, all rocket attacks on Israel suddenly ceased. I was in Russia at the time, desperate for news, and rushing back to my hotel room from endless golden turrets and treasure troves to watch any available coverage in a language I understood.

The BBC was beaming pictures of bleeding babies into rooms all over Europe, and the local English channel was worse; no glimpse of a grad or any shred of shrapnel this side of the border. My phone picked up i24 News and there you go – some hundred and twenty rockets aimed at Israel each day. But who was to know?

Mark Twain's famous quip, "If you don't read the newspaper you are uninformed, and if you do read the paper you're misinformed" is even truer of television, where graphic images of blood and beheadings are hard to sift for facts and context.

With the (contentious and debatable) view that Qatari funded Al-Jazeera leans towards the Arab view of the conflict and that leading channels often showcase a somewhat skewed account of the Middle East's endlessly breaking news, there is a crying need for some Israeli perspective.

And in October 2012 Patrick Drahi, a French communications mogul with extensive interests in cable TV, took up the challenge. Drahi, who splits his time between Israel and France, invited Frank Melloul, French diplomat and media advisor for coffee and a chat.

"I was sure he wanted to discuss France 24, which I had revamped at the request of French President Jacques Chirac," recalls Melloul, from his sumptuous office-almost-in-the-sea. "So I agreed to meet him."

Drahi had more ambitious plans. "Come and join me in Israel", he suggested to Melloul, "and help me set up a 24/7 news channel to change perceptions". Melloul, whose wife is Israeli, did not hesitate. 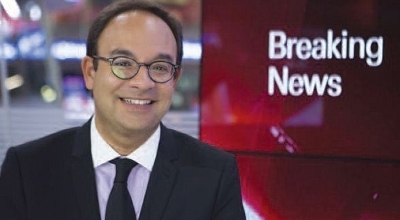 Frank Melloul ... the DNA of i24 News is coexistence

Within three months he had resigned from his job, made aliyah and begun the search for a home for i24 News. Melloul, despite looking quintessentially French – chic, sexy accent, gorgeously attired complete with playful handkerchief peeping out of a cool cream jacket – went to work with all the energy and resourcefulness of an early pioneer draining swamps.

Within weeks he had found a huge empty space in a hanger in Jaffa port and won the tender to build. One hundred days later he launched three channels (English, Arabic and French) in arguably the swishest broadcasting station in the world – with the bright blue Mediterranean Sea sparkling behind anchors as they chronicle the day's dramas: rockets, tunnels, beheadings.

Operation Protective Edge catapulted i24, (billed as Israel's other Iron Dome) into the public eye; according to Melloul it has the potential to be beamed into almost a billion households worldwide.

Although the station's brief is to broadcast more international than local news, for the seventy days from the kidnapping of the three boys until the last ceasefire, the focus was almost exclusively on the unfolding events in Israel and Gaza.

But as the journalists reported on the conflict, the spanking news studio itself became a microcosm of how a post-war Middle East should look, in a world so perfect that news shows would not be necessary.

Journalists worked side by side irrespective of their race or political leanings: Israeli Arab anchor Lucy Aharish asked counter-terrorism experts how they were coping with extreme Islamic threats, Muslims and Christians and Druze and Jews interviewed, commented and cooperated to break the very latest news. "The DNA of i24 is coexistence," notes Melloul. "Maybe it will become a laboratory for peace."

As of today, 150 professional journalists and a further 100 administrators and technicians coexist in the glass and chrome hub of the station. They come from 35 countries all over the globe, including France, Egypt, South Africa and the States, as well as Israel, producing round the clock news and analysis in English, French and Arabic, and political, economic, cultural and sports magazines.

Sometimes their English is a little interesting; phrases like "Feets on the ground," or "If the conditions will not be meet ..." occasionally have viewers reaching for their red pens. Melloul, however, is unfazed. "I didn't want our channel to be a copy-paste of CNN or BBC," he explains. "This way we portray the authenticity of our news as presented by people who live here."

Although i24 obviously prefers to present Israel's side of the story, journalists claim they have free editorial authority without guidelines dictated from above.

Regular on-air debates host guests from across the political spectrum; prior to a release of Palestinian terrorists in a bid to jumpstart the peace process two bereaved parents were invited to discuss this hugely emotional dilemma. One endorsed the prisoner release, the other was horrified at the thought.

Melloul is happy to get people talking, both on air and in living rooms around the globe. According to him, ratings in Arab countries are high, as well as those in French and English-speaking countries.

The next step is round-the-clock news in Spanish and Russian, and Melloul hopes that it will soon be broadcast on cable TV here too, as in the rest of the world.

Meanwhile, for balanced breaking news, and a stunning view of the Med, tune in to http://www.i24news.tv/en/