This year, Naomi Stuchiner, the founder of Beit Issie Shapiro, was awarded the Israel Prize for Lifetime Achievement in a moving ceremony on Independence Day.

Speaking about the experience a few days later, she acknowledged how touched she had been by the overwhelming response to the honor. "I've heard from thousands of people. It's been remarkable and exhilarating to hear the happiness people express, not just for me, but for the families, the staff and the children. Beit Issie has affected the lives of so many people. We started as a little, unknown organization and now we have achieved national acclaim. This is my biggest joy."

Three billboards in the streets of Raanana express the city's pride in their outstanding citizen and in Beit Issie Shapiro. "Everybody feels they have a part in this," she said. "It's shared by so many people."

The fact that the ceremony took place at a time when people were confined to their homes by the Corona outbreak, she feels, only added to the emotion. "Everyone was hoping for some good news. Beit Issie is not controversial.There is consensus on the issue of disabilities."

"The past week has been absolutely incredible and also overwhelming for me. I am still processing the outpouring of messages and love I received from all the caring and wonderful people, each of whom have accompanied me and Beit Issie Shapiro in the past 40 years on this incredible journey – your love, respect and support for Beit Issie is more than heart-warming – and gives me the sense that we have indeed helped together to make a change in Israel in the field of disabilities," she wrote in a "thank you" to all.

And there was a personal joy as well. Her granddaughter Noa was married in a small family ceremony in the garden of the groom's parents, with happy guests watching from a balcony upstairs.

The Israel Prize is Israel's highest honor. As President Reuven Rivlin said when he awarded the prizes this year, "Being awarded the Israel Prize is an important statement for us as a country and society, giving our best people recognition. You, the recipients of the prize, represent Israeli excellence and the many faces of Israeli society. You, the Israel Prize laureates, are the vanguard of that Israeli excellence, innovation, and pride. Because of the paths you paved, the institutions you established, and your enormous contributions ... we are able to face the current challenge as we were able to face earlier challenges ... We are proud of you."

We, the members of ESRA, are proud of you too, Naomi! 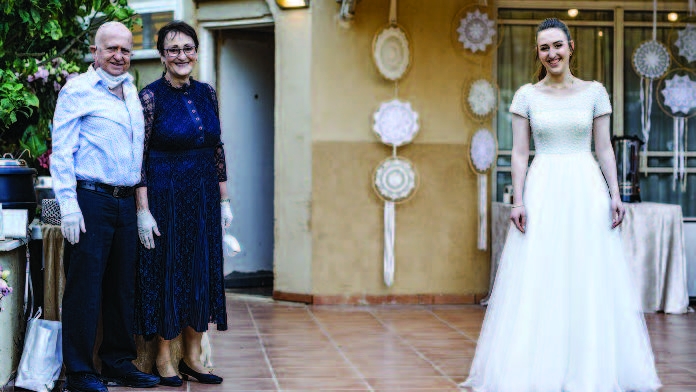 Social distancing at a simchah …. Naomi and Tuvia Stuchiner at the recent wedding of their granddaughter, Noa

As well as the Israel Prize, Naomi was recently awarded the Rappaport Prize for Lifetime Achievement. These are well-deserved honors for Naomi, who was born in Johannesburg, came to live in Israel in 1970 as a young social worker with her Israeli husband Tuvia, and for the past almost 40 years has seen Beit Issie Shapiro grow from a modestly-sized day care center for 16 children to the influential organization it is today.

Naomi, who has 4 children, 12 grandchildren and 2 great-grandchildren, grew up in a family where service to those who needed help was a matter of course. Her father, the late Issie Shapiro, was one of the founders of the Selwyn Segal Hostel in Johannesburg, a Jewish residential center for people with special needs.

When he died, the family decided to memorialize him by starting an organization that would focus on helping children with disabilities within the community, as an alternative to institutions. Naomi took the helm as Executive Director.

It's not too much to say that as well as helping to develop therapies and services for children and adults across the entire range of disabilities, Naomi has been a major influence in the way that attitudes and policies have changed towards those with disabilities in Israel and elsewhere.

"When I started," she said, "the model of care was the 'out of home' option – in other words institutionalization. Sometimes there was shame on the part of the family. When I look back, I see how much attitudes have changed. People now accept that those with disabilities have the right to be in the community. Parents fight for their children. On many university campuses, people with mild disabilities are studying. Social change doesn't happen only through legislation but through grass roots development, and this is what we worked for."

Today, Naomi is technically retired as head of Beit Issie Shapiro, but she is still very much involved.

"The truth is, I am still available for whatever is needed and I go in a few days a week. Mostly, I am involved with donors who help us create new, exciting programs, like our Emotional Therapy center. This is so important; often, there hasn't been enough consideration of the emotional issues that a child with disabilities has to struggle with. This has to be an integral part of a child's treatment program."

As for the future, Naomi says, "Our main role today is deciding how we share the knowledge that we have gained over the years so that more people will be impacted. We detect a need, develop a service, form a pilot study, do research and then we teach it. I believe that obstacles are what you see when you take your eyes off the goal. If you know what is right and just and what should be, that's where you should lead."

"There are so many people doing good things in Israel. Young people are being encouraged to go forward, to follow their determination and bring about social change. There's new technology, which gives children new ways to communicate."

"Disabilities are part of our society and we are all challenged. Beit Issie Shapiro is such an amazing project and so many have worked tirelessly for it. This prize is a moment for taking stock. It's been such a gift, such a privilege to have been involved."

"Every day, I learn from the children of Beit Issie Shapiro and their families what determination, optimism and courage are." 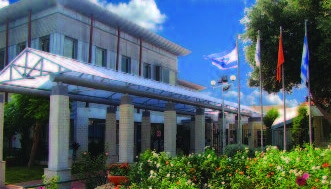 Recently, Naomi has been deeply involved in trying to deal with the difficulties caused by the effects of the COVID-19 virus in the community.

"My phone hasn't stopped ringing," she said. "We're caught up in crisis intervention. We've never seen anything like this before."

If dealing with a pandemic and the need for social distancing is difficult and frightening for the general public, imagine what it must be like for families of children with special needs.

Beit Issie Shapiro staff members did their utmost to maintain their services and innovate new solutions including emotional assistance for the families, a virtual hot line in three languages and a virtual nursery school where the children's familiar songs, games and activities were available on YouTube.

At the time of writing, the Special Education children were back at school, but the two months off had had its effect. Not all the courses had been restored, many treatments had been missed, hydrotherapy was still closed and there were only emergency dental treatments. Many staffers were still not working.

"It's a terribly uncertain time for all of us," Naomi said. "We really don't know what is going to be, and we are all at risk. This has meant a big financial crisis for our organization. With no services, there is no income and we must look for funding. This is what we do. We're there for the families and our goal is to succeed."