They say that "mad dogs and Englishmen go out in the midday sun". Well some may have questioned the sanity of the ESRA northern members when we decided not to cancel our January trip in the midst of the worst storms of the winter.

To say that the couple of days prior to the trip were stressful is an understatement. On one hand, I felt responsible for the welfare of the 23 people who had registered; on the other hand, according to the numerous phone calls and WhatsApps I got during that time, only a tiny minority wanted to cancel.

Our wonderful guide Irma Zaslansky braved the storms in advance to scout out the route and venues and we concluded that as we were travelling on main roads and only as far as Hadera, we were unlikely to get into flooded areas. I consulted those travelling from further north to arrive by train to the first pick-up point in Haifa, and when Joy Kahane of Carmiel said "I`m from Manchester, a bit of rain doesn`t put me off!" that reinforced our decision to get the show on the road.

And what a wonderful day we had. We rose in the morning to clear skies, met the bus and picked up all our passengers. ESRA members are so punctual and cooperative. Absolutely on schedule, we arrived at the Avshalom Feinberg House in Hadera, where in the warm and cosy interior our local guide Avishai took us through the story of the swashbuckling national hero. The Feinbergs were related to the Aaronsohns of Zichron Yaakov and it was Avshalom, Aharon and Sara Aaronsohn who founded the NILI Spies. We have reported previously of the sacrifice of the NILI spies from our visit to Beth Aaronsohn and how they were convinced that if they could help the British get the Turks out of the Land of Israel, they would be spared the genocide inflicted by the Turks on the Armenians at that time.

Avshalom Feinberg`s story is one of romance, intrigue and mystery.He was the lover of both Rivka and Sara Aaronsohn (and possibly several other ladies at that time).He set off across the Sinai desert to deliver messages to the British in Egypt, accompanied by Yosef Lishansky.Avshalom was killed by Bedouin marauders and Lishansky escaped to Egypt where he told his story.For fifty years nobody really knew what had happened to Avshalom and where he was buried. After the Six Day War, when Sinai was in the hands of the IDF, an Israeli officer heard from the local Bedouins that there was a palm tree growing out of the desert that was called "The Jew`s Tree".On digging up the grave they found the body of Avshalom.The palm tree had grown out of dates that Avshalom had been carrying in his pocket. There was no DNA testing at that time, but his younger sister Tsilla, who had mourned for him all these years, went to the site and found identifying features in the skeleton.She had given him the dates to take on his journey.Avshalom was then buried with military honors at Mount Herzl.Meanwhile a memorial monument had been erected in the Sharon Park near Hadera. As often happens when discovering Jewish geography, we heard that both Irma Zaslansky and Haifa member Bonnie Belkind Baram are related to Avshalom`s maternal family, the Belkinds.

The Feinberg House has an attractive kosher dairy restaurant on site where we had lunch before setting off for our next venue.The meal was a set price and I who am numerically challenged was very grateful to Joy Kahane who volunteered to collect everyone`s money and do the arithmetic.

We had planned to spend the afternoon at the Heftzibah site of the Electricity Company.This was formerly the workers village of the Hankin Estate when the early pioneers drained the swamps around Hadera and planted the first citrus groves.It has been restored together with beautiful gardens and is now used as a training center for the I.E.C.However, we were advised that due to the previous floods, much of it including the indoor lecture space was still wet and uncomfortable.So we were invited instead to go to the main power plant of the I.E.C., Orot Rabin. 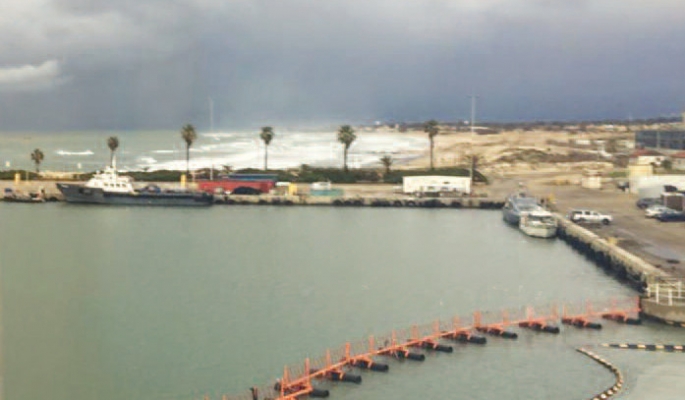 There, from exploring our heritage we were plunged into the 21st century.With the use of magnificent multi-media, we learned of the advances in the supply and production of electricity, how modern technology is reducing its pollution and preventing major outages caused by over-use or even cyber-terrorism.

As a special treat, not usually offered to casual visitors, their guide, Yael, allowed the bus to take us to the end of the coal pier where we had a magnificent view of land and sea under skies that were still bright and dry. Our very own veteran ESRA member, Carmiel branch, Mike Cronin, had been the engineer supervising the construction of the second chimney and the coal-unloading pier between 1977-1982.

With a quick visit to the nearby Avshalom Feinberg memorial, we set off home very happy that we had not cancelled this trip.We returned to a drenched Haifa and rain pouring down as we made for our cars and trains to continue the journey home.Everyone expressed appreciation for our tour guide, Irma Zaslansky who had volunteered her time and expertise.