"In the Footsteps of the Sanhedrin" 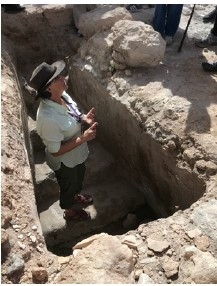 Anat Harrel standing in one of the rock-hewn Mikvaot

A trip organized by the Karmiel-Misgav Branch

By Joy Kahan and Frankie Cronin

We planned our first bus trip after Corona with tour guide Anat Harrel, and our group from Karmiel and Misgav were joined by others from Haifa, the Krayot, Ma'agan Michael, Kfar Saba, and Jerusalem. This is the first of what we hope will be a series of day trips to the Galilee to explore the different communities in the area.

On this trip we discovered the deep Jewish connection with the Galilee and traced the journey of the Sanhedrin in its wanderings through the Galilee from the 2nd to the 5th centuries.
A scenic route under highway 70 through the Kiryat Ata forest led us to our first stop at the ancient village of Usha in the Zevulun Region. There we met archaeologist Yair Amitzur, director of excavations on behalf of the Israel Antiquities Authority, who explained that explorations had started only three years ago. Before that no-one had known the exact location of ancient Usha, even though nearby there was an Arab village named Hawsha, and the Kibbutz Usha which was established in 1937. 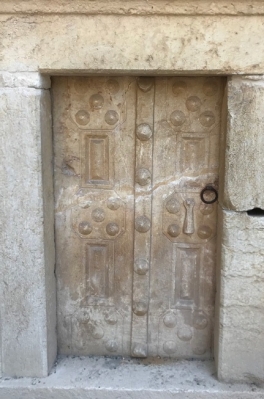 Stone doors at the entrance to the necropolis at Beit Shearim

We were excited to see the complex installations to produce olive oil and wine which indicated that this was the primary occupation and source of income of the Usha inhabitants. There is also evidence of glass making and an iron works.

Two rock-hewn mikvehs (ritual baths) with plastered walls and steps, dating to the Roman and Byzantine periods, were unearthed right next to the oil and wine presses. This shows that the Jewish workers took great care to purify themselves in the mikvehs before engaging in the manufacture of the ritually pure oil and wine.

The settlement of Usha is mentioned many times in Jewish sources as the place where the Sanhedrin was revived after the destruction of the Temple in Jerusalem, and after the loss of tens of thousands of Jewish lives in the Bar Kochba Revolt in 135 CE.

At Usha, the Rabbis of the Sanhedrin made decrees to enable the Jewish people to recover after these two major setbacks, and to reconstruct Jewish life in the Galilee.

Strangely enough after the Jews abandoned the village, the local population held the place in awe because of the previous holiness of the village, and over the centuries no-one else populated the area. This makes the task of unearthing the archaeological remains much easier.

We learnt why the nearby Somech Junction (צומת סומך) is called such. Rabbi Yehudah ben Baba who lived in Usha gave semicha to the students of Rabbi Akiva. The Roman authorities at the time forbad ordination under threat of destruction of any village where this took place.

The venerable rabbi arranged for marker stones to be laid outside Usha so that the ceremony was carried out beyond the village boundary. Despite this, Rabbi Yehuda ben Baba – the Somech – was brutally slain by the Romans and is buried near the Somech Junction. 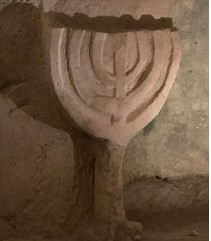 Menorah in a tomb at Beit Shearim

Our second stop was at the ancient city of Beit She'arim, which was the main Jewish burial place at ‎the time, as Jews could no longer be buried on the Mount of Olives in Jerusalem.

The necropolis was the first excavation of the Hebrew university archaeology department in the 1920s.

They discovered family tombs cut into the hillside, and a complex of ‎connecting tombs. Many of the limestone and marble sarcophagi and graves had been ransacked over the years by bounty hunters, even though it is not a Jewish custom to bury the dead with their valuables. The entrance to ‎the caves were sealed with large stone doors carved to resemble wooden ‎doors.‎

Most memorable was the large menorah motif carved on a wall of a tomb, which proved that this was indeed a Jewish burial site.‎ Many of the sarcophagi (presumably of the wealthier families) are decorated with awesome carvings.

As we drove towards the burial caves, we passed the remains of the Roman-era Jewish village of Beit She'arim, which thrived from the 1st century BCE until the 3rd century CE.

This land, which continues all the way up the hillside, was given to the watchman Alexander Zaid, one of the founders of the Bar Giora defense group, forerunner of the Hashomer (Guild of Watchmen) organization. In 1936, as he was building his house on the hill, he discovered the old stones of the ancient village, and a 'new' catacomb directly below the hill known as Sheikh Abreiḳ,

Bet She'arim is also notable because, at the beginning of the 3rd century CE it was home to Rabbi Yehuda Hanasi, the religious, spiritual and political leader of the Jewish people, and compiler of the Mishnah (the Oral Law). He was a sick man and was advised to move to ‎Tzipori for the air quality, where he lived for 17 years until his death. He had requested to be buried in the ground at Beit She'arim, (not in a sarcophagus) and beneath a study area for his followers, which can still be seen today.

We came across an anachronistic curiosity at Beit She'arim – it has become a favorite place for Arab couples to be photographed prior to their wedding, surrounded by the lush trees and greenery. There was even one group photographing inside the burial caves, professional flashlights and all – what a weird choice of location. 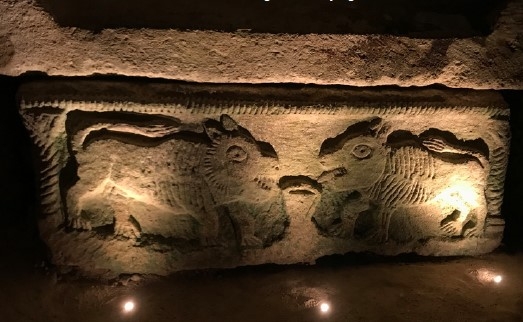 Carvings on a sarcophagus

After a lunch break at the Street Mall in Ramat Ishai, we drove to our third Sanhedrin landmark at Tzipori (also spelled Zippori, Sepphoris)– called such because it is 'perched on ‎the top of the mountain like a bird' (quote from the Babylonian Talmud, Megilla 6a).‎

Anat described to us the pragmatism of the local Jewish leaders who had decided to live in harmony with their Roman neighbors. The Romans called it Diocaesarea – the city of the god Zeus and Caesar. There were ‎16 synagogues in its heyday and numerous mikvehs, existing side by side with the Roman-style town, which boasted a semi-circular theater for amusement.

Only one ‎synagogue now remains, in a poorer section of the town, yet with a ‎beautiful mosaic floor. Tzipori was demolished in the earthquake of ‎‎363 CE and but soon rebuilt.‎

The Crusader citadel at the top of the hill in Tzipori, which the Crusaders called Le Safourie, now houses a state-of-the-art re-enactment of typical Mishnaic dilemmas where we, the audience, decide the outcome – a perfect way to complete our understanding of the process of the compilation of the Mishna.

Thank you Anat – we look forward to our next outing to discover the other communities in the Galilee.