In the Footsteps of Jewish Heroes 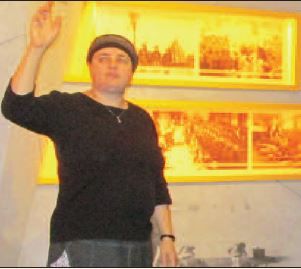 During this past year, we had heard several lectures on the centenary of the end of WW1, Balfour, Allenby etc. so this trip was a good way of rounding up all the information we had learned.

Starting from Haifa and picking up from Zichron Yaakov, we also picked up anyone who arrived by bus or train to Hof Hacarmel Bus/Train stations. Among the pick-ups at Zichron Yaakov was a couple from Raanana.

Beth Hagdudim, Museum of the Jewish Battalions in WW1 is not well known to most people. It is a very manageable museum, not too large and with easy access, in the gorgeous village of Avichail just north of Netanya. We had a good guide and saw a very interesting film and also saw the new wing displaying the history of Jewish battalions in WW2. We heard about Jabotinsky`s efforts to persuade the British Army to recruit Jewish soldiers from Palestine and from other countries during the First World War, starting with the Mule Corps and finishing with the 40th Fusiliers. The museum is situated in Avichail because when the overseas soldiers primarily from Britain and the USA and some from Australia and Argentina were demobbed at the end of WW1, the Yishuv leaders who had legally bought land there offered plots in gratitude to those soldiers. My father was one of them but had no intention of staying in a land of "sand and mosquitoes" and Avichail was then rather a desolate landscape of sand dunes. Today it is a gorgeous village with beautiful homes in tree-lined lanes with flourishing gardens.

We then had lunch at Mata`aim, a very spacious and attractive restaurant at Ramat Hanadiv. I had managed to get menus in advance to circulate to everyone and this speeded up the ordering. Service was amazingly fast but one couple got their meal so late it had to be packed up. We had a long lunch break and it was commented that it was very pleasant to all eat together and have time for networking and relaxing.

Our final stop was at Beth Aaronsohn, the family home of the NILI spy ring which contributed so much to the British war effort – and sacrificed so much, as many of them were betrayed and executed or died during their duties. As a heritage center, it has a beautiful location on the Founders Street of Zichron Yaakov. The two houses that belonged to the Aaronsohn family are filled with amazing items of furniture, lamps, carpets and drapery brought from all over the Middle East at that time as well as the extensive library of the oldest son, Aaron. And of course we saw the bathroom where Sarah Aaronsohn shot herself rather than risk betraying her comrades under torture.

At both museums, there were very good films which we could watch comfortably seated and preceded by short lectures by the guides.

This is the second trip I have led for ESRA and both times I was so impressed by the punctuality of all the members, even those who had travelled so far that morning. I did have a sleepless night before, as there had been the threat of a train strike for that day which would have made it difficult for the Carmiel members to reach Haifa in good time and I feared that the main roads would be jammed. As it happened, the strike was cancelled and we could keep to our timetable. Everyone left the bus smiling and asking when we are planning the next trip, so we seem to be going in the right direction.