If This Tree Could Talk 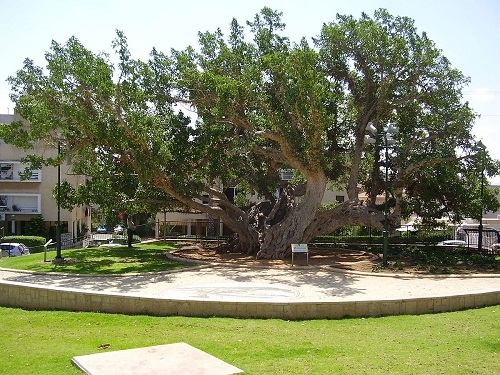 If trees could talk, the Etz HaShikma (the Sycamore) of Netanya would indeed have a story to tell.

Located in HaShikma Garden behind the Cultural Center lying between Raziel and Mintz streets, it is the largest and oldest tree in the area, perhaps even in the whole of Israel. The garden is situated on the site of the square of the former village of Umm Khalid, sometimes known as Mukhalid.

Indigenous to Egypt, sycamores were first brought to Palestine during the late Iron Age by the Philistines.

The HaShikma Garden is part of an ancient site in the city of Netanya, the capital city of the central Sharon coastal plain. It lies on a crossroads of the ancient Via Maris, where there is evidence of settlement in the area from as far back as the Neolithic period, through the Second Temple period, the Roman/Byzantine, Crusader, Mameluke and Ottoman periods leading to the British Mandate and up to present day.

However, it was only during the Ottoman period (1517-1917) that the village of Umm Khalid was founded, situated within the sub district and administrative headquarters of Tulkarm. It thrived, becoming an important center for oil pressing as is evidenced by the ruins of a bat bad (oil press) located in the garden adjacent to the Sycamore.

According to tradition, the village of Umm Khalid was named after the mother of Khalid ibn-al Walid, a great general and a personal friend of the Prophet Mohammed. Khalid, known for his courage, was one of the generals who led the break out from the Arabian Peninsula in the mid-seventh century. He rampaged through the land of Palestine, which was caught in the crossfire of the marauding armies of the Arabs from the South and the Byzantines in the North. On his way to fight the Byzantines, al Walid conquered everything in his path. He was fearless and ruthless in the face of the enemy. However, he had one weakness, his elderly mother, a brave old woman who supported her son in all his endeavors. She accompanied him in battle. It is said this was one of the reasons he fought with such vigor, to protect not only his command center, but the love of his life, his mother. According to the legend, when al Walid's army was in the region of present day Netanya, his mother was very tired and asked her son to stop to allow her to rest. She lay down in the shadow of a big tree, where she fell asleep and died. Al Walid buried his mother under the boughs of this old Sycamore tree, with a prohibition that no-one was ever to harm the tree.

The legend survived the centuries and when the Ottoman Turks arrived in the area in the 16th century, they built a village on the site of the Sycamore and called it Umm Khalid (mother of Khalid). It was unusual, in itself, that it should be called so, as Ottoman villages were generally named after leaders or national heroes, but it is even more unusual that the story of Khalid ibn-al Walid and his mother should have survived the 800 years from the seventh century.

However, the legend of al Walid has gone on to survive over 1,500 years. The tree over the grave of his mother was not touched by the Arabs of the early Islam period, the Crusaders who built a nearby fortress, the Turks who built Umm Khalid, Napoleon's army who were here in the late 18th century or even by the Ottomans who cut down all the forests in the vicinity to build a railway in the 20th century. Nobody touched the old Sycamore which gave protection to the grave of al Walid's mother.

Modern mosaic of the sycamore

And so it has stood over the centuries, unharmed, a source of shade and rest for passing travellers.

The most famous of these passers-by was Emperor Napoleon who was here twice. The village is referred to as Omm Kaled on a 1799 map of the area drawn up by Napoleon's cartographer, Pierre Jacotain, and the tree is shown on the map. That year, 1799, Napoleon rested under the Sycamore after his victory near Jaffa as he passed on his way North to Akko. As he lay contentedly under the tree, he thought that his conquest of Palestine would be easy. However, it was not to be and after his failed siege of Akko later that year, he rested for a second time on his way back to Egypt. This time frustrated and angry,, he ordered the destruction of the village of Umm Khalid.

The British traveller James Silk Buckingham passed through the village of El Mukalid in 1816, describing it as 'rather poor,' while noting that it resembled an Egyptian village in form and in construction.

Sir Moses Montefiore and his wife Lady Judith Montefiore came through the area in 1839 on one of their five trips to Palestine. Lady Judith's diary entry, written in Hebrew, for Sunday June 23, 1839 states that they 'Slept in Jaffa (feels good) and came North to Nahal Poleg which was dry making the area like a desert. The locals grew a type of tobacco plant whose leaves were dried and used for smoking. In the kikar of the village of Umm Khalid stood a large Shikma. There was a well with lovely sweet water.'.

She went on to write how they arrived in the evening, just before sunset, resting under the boughs of the Sycamore. They could see the Carmel in the distance as the sun set. She wrote that by the light of the moon, it was beautiful, just like a work of art, very romantic and they slept there in the open.

In 1873-4, while carrying out a survey of the area on behalf of the PEF (Palestine Exploration Fund), the British military officer, geographer and archaeologist Charles William Wilson drew a picture of the Sycamore which was published in his book Picturesque Palestine, Sinai and Egypt. A mosaic adaptation of that picture is depicted at the base of the tree and it is interesting to note that the tree has hardly changed from that day to this.

According to legend. it was under the shade of this tree that negotiations took place in 1928 between Sheikh Zalach Hamdan, Mukhtar of Umm Khalid and Itamar ben Avi and Oved ben Ami, members of Bnei Binyamin Agriculture Organization for the purchase of the land on which Netanya now stands.

This is indeed the story of a very old tree, the story of a tree which may be one of the oldest in Israel, if not the oldest. But just how old is the Sycamore? It's hard to separate facts from legend but it has been established that the age of the tree is anywhere between 600 and 1,500 years.

The trunk of this old Sycamore is about eight meters in circumference. Over the centuries the trunk has split and regrown time after time, giving it the appearance of a gnarled old woman. Its hollow trunk defies dating by dendrochronology. However, there is written reference to the tree from the 14/15th centuries so it must be at least 600 years old and if we are to believe the legend of el Walid, it could date back as far as the seventh century and be up to 1,500 years of age.

Whatever its actual age, throughout many years and events the old Sycamore has stood here, a silent witness to the events of many centuries. It has witnessed caravans plying between Egypt and Syria, Arab and Byzantine armies crossing to and fro, the Christian Crusaders, the Muslim Turks and Ottomans, the French, British and Palestinians and now the Jews. The area would be unrecognisable to the ancients. A dirt track has become a six-lane highway and a sleepy village, a bustling city with a railway.

While many tourists come to hear the story of the ancient Sycamore few now seek rest in its shade. However, the tree continues to stand bearing silent witness to daily events as a new history unfolds.