How Channel 2 brings us the News 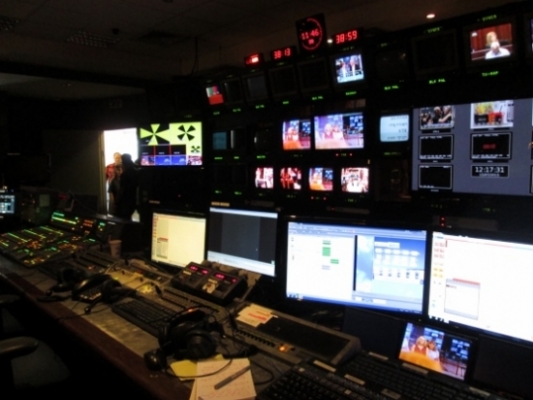 Inside the Channel 2 newsroom control room.  Story and photos by Yael Meyer

When the summer heat was revving up, a hardy group of ESRA day-trippers boarded an air-conditioned bus heading to Jerusalem.

Having made a quick stop at the Elvis Presley Café, grabbing cups of coffee to fortify ourselves for our adventure into the world of TV news, we proceeded to the studios of Channel 2 Television News for the rest of the morning.

The studios are located in Neve Ilan overlooking the Judean Hills and Jerusalem.

The first thing one notices is that the landscape is dominated by a field of huge to just big satellite TV dishes. Clearly, they are broadcasting far and wide all around the country.

Passing up the enclosure for the set of Big Brother, we headed up into the versatile set for Channel 2 News.

The same set is able to be adjusted so that it can accommodate all the different formats of Channel 2's news programing – from the morning and evening news programs to news talk shows like "Meet the Press" and "Uvda" (Fact).

While Channel 2 has satellite newsrooms and can naturally broadcast live from the field, the studio we visited is the central focal point for all their news broadcasts. 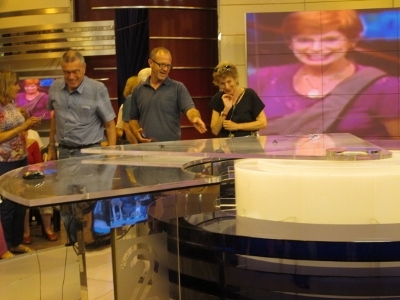 So that’s how they do it! ESRA day trippers in the news studios 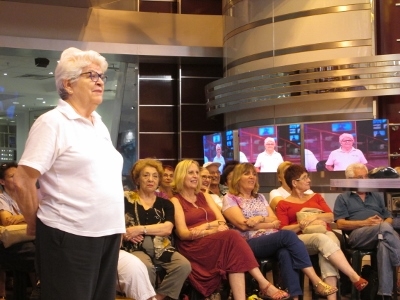 Channel 2 currently has two concessionaires: Keshet and Reshet, which broadcast 3 or 4 days a week each.

This rotation accounts for slight differences in programming and some different correspondents.

Our guide for the morning was a very experienced journalist who has worked in many different capacities for Channel 2. He took us through the nuts and bolts of how the news programs are produced and how the equipment (cameras, booms, panels, the central table and more) in the studio works.

We got to experiment with the teleprompter and then visit the control room so to see how the same set can be changed to accommodate different broadcast.

Now that we had become experts is how news is covered, we headed up the hill to Jerusalem where so much of the news is made.

After a stop at the First Station where many lunch options can be found, we continued on to our afternoon date at the Tower of David Museum in the Old City.

The Tower of David Museum is located in the medieval citadel near the Jaffa Gate, which is one of the historic entrances to the Old City.

The museum presents Jerusalem's story detailing the major events in the city's history beginning with the first evidence of a city in Jerusalem in the second millennium BCE, until the city became the capital of the State of Israel, as well as its significance to three religions.

The museum's permanent exhibition illustrates the city's history along the axis of time using a myriad of educational methods for its displays.

The Citadel is also an interesting archaeological site in its own right, evidence of which can be seen as one tours the museum. We first climbed to the highest point of the Citadel's tower, where we were treated to a 360-degree view of Jerusalem.

From there we were able to view the Old City of Jerusalem (including the Dome of the Rock and the Al-Asqa Mosque on the Temple Mount), as well as views north to the tower of the Hebrew University, east to the cemeteries on Mount Scopus and west to the city's more modern areas.

Being totally ready to enter the museum's air-conditioned exhibit halls after our outdoor viewing of the Jerusalem panorama, we entered the museum exhibition halls to learn of the different stages and different occupiers of Jerusalem through history until the establishment of the State of Israel and the liberation of the Old City in 1967.

In the process we viewed evidence of how the people lived in the area from the Canaanite Period, The First and Second Temples Period (including dioramas of the Assyrian siege, the Temple's rebuilding by Herrod, and the fall of Jerusalem in 70 BCE), the Roman, Byzantine, Muslim, Crusader periods, and on through to modern times.

Clearly, the museum is worth an entire day's visit, but we needed to head back to Tel Aviv and Raanana in our refreshingly air-conditioned bus. 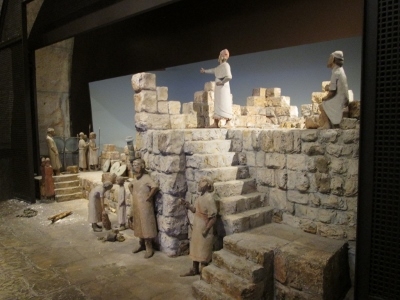