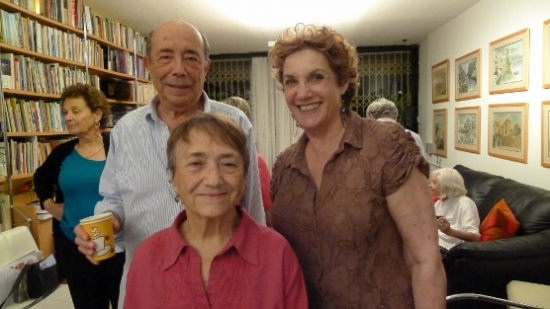 I was actually the one who felt honored to be invited to the book launch of a novella, A Knot of Shadows, that had been written in English by Riva Rubin, sensitively translated into Hebrew by Oded Peled and published by Rafi Weichert of Keshev La-Shira Publishing House. The interesting art work on the cover was drawn by Barney Wainer, Riva's brother.

In my life I have attended fewer book launches than I can count on the fingers of one hand, but there was no way I was going to miss this one. The launched book was called "Kesher Tsalim" in Hebrew and is a book I would probably never read in this lifetime, at least not in Hebrew. I have a confession to make. After living in Israel for 36 years, I have yet to read a chapter, let alone an entire book in the language of our fathers.

The evening was held in the home of Professor Karen Alkalay-Gut and the lounge was overflowing with a collection of Riva's colleagues, family and friends. From the looks on everyone's faces, it seems I was not the only one to be excited and in awe of the well-researched and touching story being read to us. Initially we listened to extracts read from the book in Hebrew by Oded Peled the translator, followed by a summary of the original text read to us in English by Riva.

Riva looked as regal as ever with a glint of satisfaction in her multi-colored eyes after an autobiographical investigation traversing a lifetime of insights and experiences. Both Professor Alkalay-Gut and Professor Richard Sherwin spoke glowingly and warmly about Riva as a Poets poet, the Grande Dame of English poetry and poets in Israel, who had made her mark in the pioneering spirit so intrinsic to her being. She worked towards the inclusion of Israeli minority-language writers in the literary mainstream, was one of the founders of the Israel Association of Writers in English and served for several years as its chairperson. She edited the IAWE literary journal ARC and the PEN Journal of Israeli writers in English translation and served for many years on the executive of PEN.

It was clear from what they said and what I'd known all along, at least since I privately adopted her some twenty five years ago, that Riva is an extraordinary human being as well as an outstanding poet.

Riva is one of the most sensitive, intuitive courageous and intelligent teachers of poetry and creative writing to have ever crossed my path.

Extract from A Knot of Shadows

The experiences of four women in impressionistic 'brush strokes' that provide a sustained fictionalized biographical account. It begins with the death of an 18 year old Jewish girl, Julia Kadič, in Graz, 1901, a month after she gives birth out of wedlock to Judith. Anton, the 19 year-old Catholic father entrusts his newborn child to Julia's sister Anna, who lovingly raises her in Vienna till the age of seven. After four years at sea as a ship's pianist, Anton returns to Graz. Hoping to establish a family framework for his illegitimate child, he takes her from Anna to live with him in Graz, where he soon finds that he must protect the child from the hostile religious fervor of his second wife, who knows or suspects the little girl's Jewish origins. The Knot of Shadows is formed by the secrets kept from Judith concerning her maternal Jewish origins in the face of her Catholic upbringing by her father, her illegitimacy and later, following her marriage into an Orthodox Jewish family in South Africa, the mirror-secret of her Catholic father. Against the background of social, political and religious prejudices of the period and the direct cruelty of her stepmother, Judith was caught in a web of evasions and mysteries that laid the foundations of rejection and abuse that typified her marriage.

The fourth woman in the story is Judith's daughter Regina, who is the indirect narrator. The narrative covers events from turn of the century Austria, World War I, the early rise of Nazism in Austria, Judith's life and death in South Africa and Regina's eventual move from South Africa to Israel, in a near mystical closing of the circle that began with her Jewish grandmother, Julia.