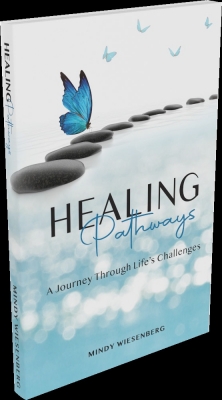 Healing Pathways
A Journey Through Life's Challenges
By Mindy Wiesenberg

In March 2020, just as the world was beginning to grapple with Covid-19, Mindy Wiesenberg realized that she was more than ready to meet the challenges of lockdown, self-isolation and social distancing. Since being diagnosed with cancer in 2012, Mindy had needed to self-isolate many times to safeguard herself against infection during chemotherapy treatments. She was used to a world without hugs, kisses or handshakes. She could never travel on public transport. For the first time in years she was, as she puts it in her new book, Healing Pathways, "ahead of the game".

Started in 2018 and completed in 2020 during lockdown in London, the book charts Mindy's personal journey over the past nine years as she has faced not only serious illness, but a further devastating blow with the sudden, untimely death of her husband, Johnny. The knowledge she has gleaned from her wide reading on a range of subjects connected to health and loss, which she shares so articulately with readers, and "Stepping Stones", a helpful summing up in bullet points at the end of each chapter of lessons she has learnt along the way, make this much more than just Mindy's story. Diary entries add further real-time insight and depth to a book which has much wisdom to impart to readers.

Before her diagnosis, Mindy had wanted to write a story about the Holocaust based on her late father's life in pre-war Poland. His entire family was murdered by the Nazis and he had talked very little about his past to his children. After his death in 1993, she started going to creative writing classes hoping to write a story about a family torn apart by war, but left when she became ill. "I no longer had the appetite for fiction as my reality became a more complex story in itself," she writes. "I felt that if my time was running out, I wanted to record my life story for my grandchildren." She began work on her own memoir but stopped in order to concentrate on the cancer blog she was writing at the same time. "This was far more therapeutic and real in a sense than my memories. It also served as a form of therapy, as I openly expressed my feelings about my illness."

Three of Mindy's four children live in Israel. Due to her illness and Covid restrictions, she wasn't able to come from her home in London to visit freely over the past few years. Earlier this year she made aliyah and lives in Netanya in the house she and Johnny had hoped would eventually be their main home together in retirement. They were in Israel visiting their children when Johnny contracted pneumonia. Reassured that he would recover after a few weeks and be able to return to London, Mindy went home by herself at the beginning of January 2018 for urgent medical tests. When she was given the terrible news two days later that Johnny had died suddenly in hospital, Mindy held on to a strong belief that she and her family would somehow get through the trauma and shock together.

Elisabeth Kübler-Ross famously formulated the five stages of grief: denial, anger, bargaining, depression and acceptance. For Mindy, the last stage of acceptance was the one she reached first after Johnny died. She recognized that not allowing herself to deal fully with Johnny's death was her coping strategy. "In many ways this defense mechanism reflected how I dealt with my cancer over the years." For this reason she decided she wasn't ready for bereavement counseling. "I needed to have the energy to physically and mentally heal myself from my cancer before I could deal with the emotional turmoil that I suspected would result from opening myself up to discussing my feelings." Mindy says that the many stories she has read of survival and resilience have taught her so much about coping with grief and loss. She admits she is still in the process of searching for what the writer David Kessler has called the sixth stage of grief: finding meaning. "Have I found meaning in the deep loss of Johnny and what I have been through with my health?" she asks. "It is a question I am still in the process of answering, but I do know that writing this book has helped me find meaning in some way and helped me heal from my losses."

The chapter "Coping with Loss – Learning to Grieve" will resonate with anyone who has suffered bereavement. It is also pertinent right now, as we all deal with the various levels of "loss" due to the pandemic. Although bereavement presents grief at its rawest and deepest, we can also grieve, Mindy notes, at the loss of "any ideal that has been brutally punctured by reality". Holocaust survivor Edith Eger writes about this concept in The Choice, a book which had a profound effect on Mindy and inspired her to write her own story. Eger survived the horrors of Auschwitz, but she does not believe that anyone else's suffering should be diminished or minimized even when compared to that ultimate horror. "I don't want you to hear my story and say, 'My own suffering is insignificant'," Eger writes. "I want you to hear my story and say, 'If she can do it then so can I'."

Today humanity at large is grieving, and no one should be made to feel their own loss is less significant, their own pain and fear less acute than someone else's. We all need time to process the ramifications of a global crisis that is still unfolding.

Other chapters in Mindy's book describe the different experiences that have helped her to build self-awareness and inner strength over the years: from deep analysis of her feelings and thought processes, to changes in her diet and taking different forms of exercise. It is all written clearly and sensitively, with the understanding that while certain things may have helped her, there is no definitive way to heal. Her hope is that readers who are themselves confronting difficulties in their lives will be encouraged and helped by her book.

There is a bibliography at the end listing the books that she found "helpful and interesting". Mindy's own book deserves the same description. May she continue to be well for many years to come.

Mindy Wiesenberg can be contacted by email: This email address is being protected from spambots. You need JavaScript enabled to view it.

All proceeds from the sale of this book are being donated to British Emunah.