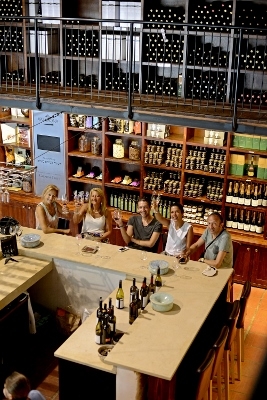 Inside ... the Tishbi Winery, which is at Binyamina and Zichron Yaakov

In Israel there's no shortage of great places to stop for a drink with friends, family or on a date. Covering the food and wine scene for several publications, I've come across some favorite watering holes that each has its own special charm and attraction. I could easily have a separate list for places that highlight wine or just my favorite haunts in Tel Aviv but for those who like a bit of variety in beverages and geography, here's a more diverse selection of respites.

The Tasting Room (36 Kaplan in the Sarona complex)

Maybe the best place to introduce a newcomer to Israeli wines: 44 different, mostly Israeli wines are offered here by 11 no-wait automated drinking stations where you insert an in-house debit card and the stations pour you either a taste (30 ml), a half glass (75 ml) or a full glass (125 ml) of wine. Tasty trays of treats are available to match whatever wine you choose. Hundreds of wines are also available by the bottle for drinking here or to take home at reasonable prices and it's also conveniently located near to many buses and trains. 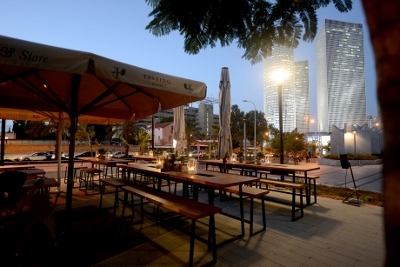 Inside ... the Tishbi Winery, which is at Binyamina and Zichron Yaakov

Ariel Leizgold might be the most influential mixologist in Israel, and his 223 and newly minted Bellboy Bar are both powerful magnets for curious cocktail connoisseurs. Leizgold consults for many restaurants and bars across the country so if you don't make it to Tel Aviv you might get one of his recipes without even knowing it if you're ordering a drink that's off the beaten path - visually stunning and a pleasurable parade of intoxicating ingredients. Their Passionfruit 2006, Cherry & Thyme and Spicy Apple Martini are my favorites, but you are sure to find one of your own.

Israel's first micro-brewery takes a fraternal lead by not only offering their own crafted ales, lagers and stouts, but by frequently featuring a guest brewery on tap - something no other brewery is willing to do. Pub chow, live music and a special twist on regular offerings give plenty of choices but my favorites include their Leche Del Diablo (Milk of the Devil), a chili pepper brew with a kick, and their scrumptious Cherry Vanilla Stout.

Who knew that Madrid was a gin capital of the world? Not in production but in appreciation. Owners Yossi and Tal did, and their travels to Madrid created an affection for reproducing what they liked about Spanish tapa bars and gin joints. With over 40 gins to sample, "neat" or in gin and tonics or more complex cocktails, it seems as many return for their savory meat, sublime seafood and anything but dull veggie dishes which give plenty of options for diners (except those who keep kosher).Their attention to detail and to elevating gin to a higher place even has a selection of five tonics to accompany your juniper berry bliss.

With scores of no frill coffee shops that offer hot drinks, fresh juice, soft drinks and even sandwiches, pasta and soup, Cofix has several locations that offer NIS 5 beers, glasses of wine, top shelf shooters and cocktails that are only NIS 5 /ingredient. Their Tel Aviv and Jerusalem locations are open until 2am with other locations open until 11pm. You can drink for a whole evening at Cofix for the same price that one beer or cocktail might cost you elsewhere. Perhaps it's not for every occasion but on the way home from work or while you're waiting for your last pay check to clear, it's a great option.

A pioneer in offering beer from chilled kegs, their beer is often fresher and more vibrant than it is in other bars. With over a dozen Israeli and imported beers on tap, there tends to be a beer for anyone's preference and NIS 22 refills make drinking their premium beers more wallet-friendly. A late night menu after 1am caters to their "until the last customer" policy popular in Israel, and their gourmet burgers have their share of loyal fans.

Jem's owners, Jeremy (Jem) and Dan, provide three very different spots to taste all their beers on tap or take some bottles home. Ales, lagers and stouts accompany some of the best pub food in Israel including their in-house sausages and beer battered fish and chips. The fact that it's all kosher makes it a place you can bring all your drinking pals.

Overlooking the Old City, their rooftop restaurant has the best panoramic view of any eatery or bar I've experienced, and their gourmet menu and choice selection of fine wines makes any visit an even more memorable experience.

If you ever want to escape to a bar that feels Anglo friendly, Mike's Place seems like a consulate of sorts with burgers, wings, fish and chips and Mexican fare. Drink specials throughout the week mean there's often a good deal going on any evening and they also have live entertainment and several screens to watch your favorite sports match.

The winery is in Binyamina and they have a café at the entrance of Zichron Ya'acov's main street. Both offer great breakfasts and lunches, while the café is also open until midnight for dinner or drinks, but these kosher eateries both close for Shabbat and holidays. The winery also features NIS 30 wine and chocolate tastings (a perfect cheap first date), insanely tantalizing BBQ for Friday lunch which, for NIS 25, gets you brisket in a pita with a bottomless glass of their young and fruity Cab/Syrah blend.

Monday nights at Eli's draws both musicians and fans from all over Israel for a jam session attracting some of Israel's best jazz and blues musicians. Starting at 10pm and often going past 1am until 3am if the bards and imbibers are in sync, no cover charge means you've got more to spend on brews or pub fare.

With perhaps the best wine list in Israel with hundreds of wine available by the glass, the old stone building built in 1876 has an elevated hillside picturesque vista overlooking Mt. Hermon, the Golan Heights and the Hula Valley. Stop here to try a new or favorite Israeli red with succulent lamb chops or a steak. Of course a good selection of white wines is available to match their poultry, fish and salads.

I could go on and on but let's wait until you catch up first - and if you stop by at any of these locales, don't be surprised if you see me there raising a glass.