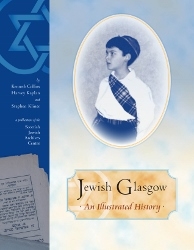 A book in the making

As I write, we are celebrating the second anniversary of the publication and launch of Jewish Glasgow – An Illustrated History at Beth Hatefutsot in Tel Aviv.

The year was 2000 and I was president of the Glasgow Jewish Representative Council, the representative body of Scotland's largest Jewish community. I had for several years harbored the notion of producing a pictorial history of Jewish Glasgow, as I felt that Jewish Glasgow had a story to be told.

As a practising lawyer, my skill-set did not extend to historical writing, publishing or printing but I had a predetermined vision as to what this book should look like and I could not let the idea go. It was to be a pictorial history book, light in style and of good quality, that purchasers would be proud to display on their coffee tables.

The more I investigated the concept, the greater the task became but nothing was to prepare me for the task ahead and the amount of work that would be involved. 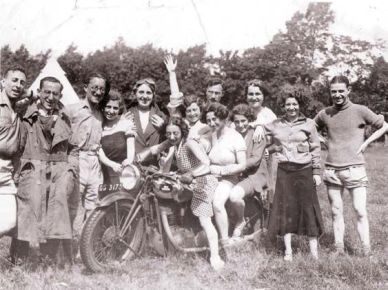 While I had initially envisaged this as a Millennium project, time began to slip away. After a few false starts, I approached Dr Kenneth Collins who had already written a couple of books on the history of Jewish Glasgow – Second City Jewry and Scotland's Jews - and Harvey Kaplan who, as Director of the Scottish Jewish Archives, had access to a vast and growing collection of photographic material. From that point on the project started to come to life.

After a couple of meetings, we agreed on a plan. Harvey's role was central to the project. He was to source pictures from the Archives' collection that were interesting and showed the vibrancy of the community. Kenneth's remit was to write the linking narrative, captions and source appropriate vignettes from the writings of local Glasgow authors. My role was to manage the project, cajole and exhort, sort out funding and generally administer.

Our roles intertwined. We were in constant touch, each approving or adding to narrative, approving or rejecting photographs and many a lunch-time I could be found rummaging through boxes at the Archives looking for suitable material. One constant was that I wanted the pictures to tell the story; for the pictures to be the lead, although to be honest, sometimes it did work in reverse and we would be searching for the suitable picture to fit Kenneth's narrative.

From the outset, I had very clear ideas as to the proposed style, format, layout and design of the book, and throughout the project, I was unwilling to compromise on these, even when financial issues became a consideration. 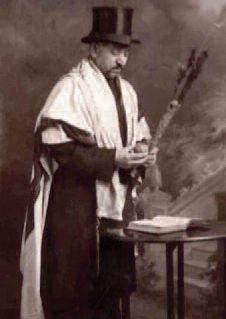 Abraham Hertz of Pollokshields c1950. It this time private sets of arba minim were a rarity in Glasgow

Little did any of us appreciate just how big a task had been undertaken. It was a constant battle to find interesting pictures, provide captions and link the whole. However, the catalyst came when Jacqueline Spayer Freedman of Jqs Design was appointed to design, layout and coordinate the technical production. Jacqueline, originally from London and now Jerusalem via Oban and Glasgow, was a graphic design artist who had previously worked in Glasgow and had a feel for the Glasgow community. Kenneth and I met with her a couple of times in Jerusalem and I went into great detail as to what I was looking for, right down to the coloring of the pages.. I will never forget the feeling of exhilaration when she printed the first draft chapter. She had captured the essence of what I had had in my mind all those years. Jacqueline proved to be equal to the job and began to see the project as a labor of love.

As I said, little did any of us appreciate just how big a task we had undertaken and it was not made any easier in that during the life of the project, three of the four collaborators made aliyah.

The book was finally completed by the end of 2013 when it went to print and was launched, first in Glasgow, and then at Beth Hatefutsot Museum of the Diaspora in Tel Aviv.

The book was an immediate sell-out. Reviews from around the world surpassed our expectations, and interest and sales remain lively. Now in its second reprint, the book confirmed for me that Jewish Glasgow did have a story to be told.

For enquiries in Israel contact: This email address is being protected from spambots. You need JavaScript enabled to view it.

*Stephen Kliner, a solicitor from Glasgow Scotland, made aliyah in December 2012 and is currently reinventing himself as a registered tour guide, having just completed a course at the Hebrew University. Stephen is married to Barbara, the current Chair of ESRA Netanya.