Getting to Know Hof HaCarmel and Ramat Menashe

The first lockdown had come to an end and I found myself, like many out-of-work tour guides, with no bookings. There was no sign of any tourists on the horizon, and that looked likely to be the case for the foreseeable future. There had been no work since the end of February and I, like most tour guides, tried to keep up to date with the latest archaeological findings, by reading a backlog of newspaper clippings. I had done my housekeeping - sorting out notes - and had attended enough Zoom lectures to last a lifetime. There seemed nothing for it but to seek out some like-minded people who were missing the outdoor life and start hiking.

Enter David and his one-time college friend, Gary, who were posting regularly on Facebook, about their local hikes. I contacted them and they invited me to join them and their other occasional participants on their twice weekly hikes in the Hof HaCarmel/Ramat Menashe region.

Hof HaCarmel / Ramat Menashe is part of the northern Israeli coastal plain stretching from Haifa and Tirat HaCarmel in the north to Hadera, Pardes Hanna and Caesarea in the south, from the Mediterranean Sea in the west to Megiddo and the Jezreel Valley in the east. The Carmel Range was created from a geological fault and creates a steep, cliff-like landscape. Dense Mediterranean woodlands, groves of planted pine and naturally occurring stone pine – all evergreens – create an 'evergreen mountain'. Species of rare plants grow on the Carmel, including Madonna Lily, while wildlife species make their home here, among them salamanders, vultures, and wild boars. 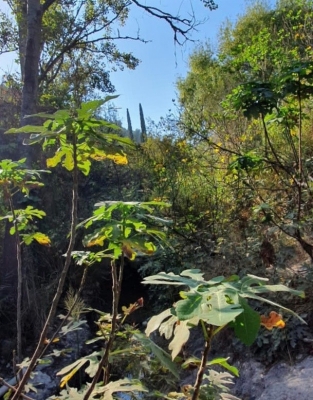 We set out early morning, twice weekly, driving north from Netanya/Givat Olga, parking in one or other of the many National Parks that abound in the area. The routes of our hikes are loosely planned by Gary. Sometimes we follow well defined paths while other times we just leave the car and follow our instincts. We enjoy hiking in the multi-faceted terrain of the Carmel – trampling through forests, clambering over limestone rock and through Mediterranean scrubland, sinking in sandy dunes and swimming in the clear blue sea, while all the time marvelling at the rich diversity of flora and fauna and spending many hours taking photos of breath-taking scenery.

There are varied sites of antiquity in the Carmel dating from prehistoric to Ottoman times and we are constantly surprised as we stumble across unmarked Ottoman water mills, ruined buildings, stretches of Roman road and memorials to the fallen, often in the middle of nowhere.

On one particularly beautiful hike along Nahal HaShofet near Yokneam we were following the riverbed among the abundant bamboo cane and fig trees when we encountered, what seemed to be, in the middle of nowhere, Emek Hashalom (Valley of Peace), a leadership and training centre on an ecological farm run by Lotem. Lotem, the leading organization of its kind in Israel, offers accessible hikes and educational nature activities to children and adults with special needs, with visual and hearing impairments, physical, intellectual and emotional challenges, children on the autism spectrum and at risk youth, as well as mothers and children residing in shelters for victims of domestic violence. Its mission is Making Nature Accessible.

The site was originally founded in 1960 by Dr Oscar Adar, a Christian German pilot who, after a spiritual quest which took him from Germany to the Far East before arriving in Israel where he settled on this flower covered hill on the banks of Nahal HaShofet and laid down the foundation stone for a farm to become known as Emek HaShalom. In 1964, he was joined by Hermann Betzner, an Austrian Christian. As the years passed, differences of opinion on theological issues emerged between them and Oscar decided to leave Emek HaShalom, convert to Judaism, change his name to 'Asher' and move to Jerusalem. People came and went, seeking peace of mind, but Hermann remained at the site and in the 1970s was joined by Yosef Elisha. They planted trees and plants making the rocky land bloom and cultivated the land, ecologically, with a solar electricity system for domestic needs and used only spring water. They adhered to a strict organic vegetarian diet, most of which food they grew themselves. Yosef and Hermann passed away in 1999/2000 respectively, the latter at the ripe old age of 99, leaving the estate to the Megiddo Regional Council with the stipulation that it should provide activities for those in need of assistance while maintaining its ecological character.

Lotem, in making nature accessible, continues to maintain Emek HaShalom as an agricultural farm while opening the gates to the many hikers visiting in the area. At the farm, workshops are held on ancient agriculture that are designed to strengthen the participants' connection with nature and their heritage, while gaining practical experience in operating reconstructed agricultural installations whose activities combine experience with varied creative activities while applying the use of odours and sounds in addition to materials which nature has to offer. These activities are carried out to strengthen and develop physical and motor skills, develop creativity and stimulate the senses, as well as cope with challenges on an individual basis and offer enjoyable social activities.

On a completely different theme, a hike in Hotem HaCarmel National Park follows the line of the western edge of the Carmel, affording magnificent views over the Mediterranean. Here, at the highest point of the southwest ridge of the Carmel range we happened across a little-known archaeological site, discovered in 1873 by a team led by Conder and Kitchener of the Palestine Exploration Fund and recorded in The Survey of Western Palestine. The plans and sections made by them are today invaluable, as the site was then in a much better state of preservation. Archaeological excavations carried out between 1984 and 1987 revealed three main periods of settlement: Second Temple Period (1st Century CE); Byzantine Period (4th -7th Centuries CE); and the later Muslim Period (13th-14th Centuries CE). 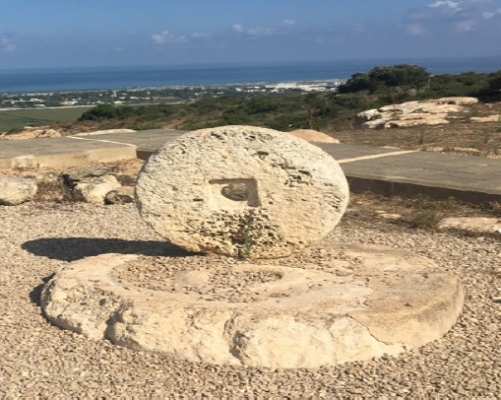 There are excavations of a Second Temple Period farmstead which belonged to a Jewish family, surrounded by a massive wall with two rock-hewn winepresses, an oil press and a threshing floor all of which attest to the agricultural character of the complex. There is a series of storerooms and in the main living quarters, a ritual bath (mikveh) with an adjoining small bath. This area was originally protected by a large internal tower.

A Byzantine period villa contained storerooms and stables, with an adjacent winepress and two water cisterns. The villa was a two storey, vaulted building built around an internal courtyard. The vaults were constructed of lime mortar and rough field stones. On the eastern side there were three long rooms, separated one from the other by two fenestrated walls and probably served as stables and storerooms. A further large room may have been used as a wine cellar. The main doorway and entrance porch are located in the western side of the complex, as well as another storeroom and on the southern side, with a second access to the courtyard, probably for animals. The residential quarters were upstairs.

During the later Muslim period the site was known as Mansur el Aqueb and was used as a shelter by groups of squatters who lived in the ruins of the old villa. The remains of floors used by the squatters can still be seen.

Other hikes in Mount Carmel Nature Reserve and the Singal Forrest are purely for the enjoyment of the varied nature. Here we see a proliferation of squill, the first flowers of the season and herds of cows strolling freely throughout the Carmel. We pass prehistoric caves and walk near the memorial site to the Mount Carmel Forrest Fire of 2010 and see the damage which is still evident, up close. We walk in Ya'ar HaCarmel whose paths are amongst our favourites. We experienced the first spots of rain (HaYore) and the resultant earthly smell known as petrichor. From the Menashe Observation Point we could look out over the moshavim of Kerem Maharal and Ofer.

A short hike, nearer to home along Gador Beach and Marine Nature Reserve, is the stretch of the kurkar Ridge running between Givat Olga and Mikhmoret. From the top of the ridge we could clearly see the abrasion platforms (areas of kurkar, or calcareous limestone, built by various marine invertebrates), as well as crevices between the rocks that serve as habitats for species of algae, invertebrates, and fish. The rough Kurkar stone, so favoured by the Crusaders, was hued in the 12th century for their many cliff top fortresses dotted along the Mediterranean coast. Here, the beach is an egg-laying site for sea turtles, a globally endangered species, and a habitat for sand crabs. Various types of continental soils (sand and calcareous limestone) and the Mediterranean climate coverage at the dunes, create a meeting point for desert and Mediterranean plant formations. The reserve is home to endangered endemic species unique to Israel's coastal plain, such as purple Iris, dock and the beautiful Sand Lily - Havatzelet HaHof. Among the animals found here are the red fox, Indian crested porcupine, raptors, and songbirds.

Many a hike finished with a stop off at a roadside stall in Fureidis, owned by Ala, where we enjoyed a plateful of fresh stuffed vine leaves before returning home. 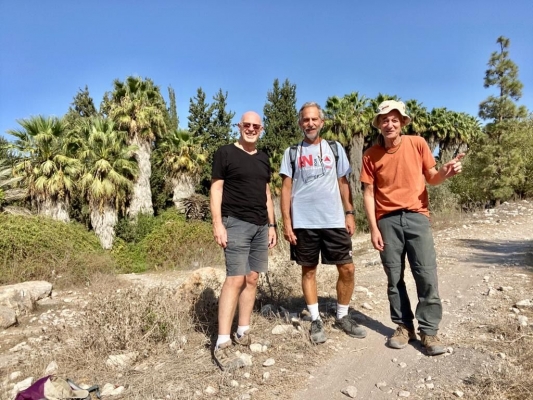