From Bible to Bedouins and Battles

If ESRA Netanya's March trip to the Golan set out against a backdrop of grey, wet weather, the exact opposite could be said of its trip to Beer Sheva two months later – what a difference a couple of months make.

Setting out early on the morning of Monday 20th May, the sun was shining as Netanya experienced a relentless sharav. After a couple of pickup points in Netanya, our bus reached Kfar Shmaryahu five minutes late to pick up the last few from Herzliya and Raanana, only to find them desperately trying to find some shade in the Forum car park. It was 07.45 and already the weather was hot … a taste of what was to come.

The long journey south allowed the bleary-eyed to continue with their disturbed slumber, at least until reaching our morning coffee stop at Dvira Junction. En route I had tried to introduce the assembled to the unique geological formations and flora and fauna of the Northern Negev, but to little avail, and that despite having laid down my conditions at the outset – no talking or snoring while I'm speaking. 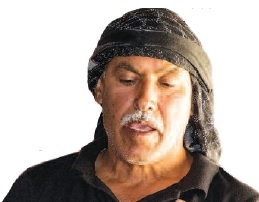 Refreshed and back on the bus, interest picked up as we passed Rahat, the largest Bedouin city in the world, currently home to a population of 66,000 plus and also home to Daniel Birnbaum's relocated SodaStream plant. Rahat is situated around a hill, an archaeological site that dates back 1,700 years. I started talking about the Bedouin as a prelude to our first site visit, the Joe Alon Center in Kibbutz Lahav, named in memory of Colonel Joe Alon, an Israeli Air Force officer and military attaché to the U.S. who was mysteriously shot and killed in the driveway of his home in Maryland in 1973. Joe Alon had been stationed for many years in the Negev and enjoyed good relations with the Bedouin. When he died, his friends from Kibbutz Lahav established the Bedouin Center in his honor. Here we saw a film, walked round the small museum of Bedouin culture, and experienced traditional Bedouin hospitality as we sipped coffee in the relentless heat of an authentic Bedouin tent made of goat skin – and that all while Ali regaled us with romantic stories of nomadic Bedouin life in the desert. 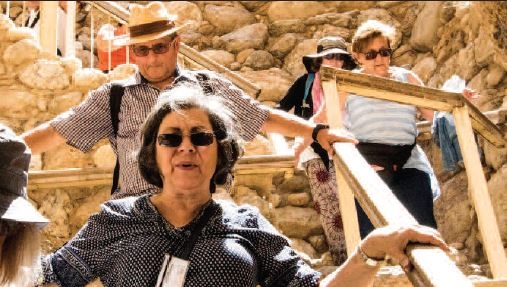 Back on the bus, having pointed out that perhaps little had changed in the way of culture and hospitality since the time of Avraham Avinu, our nomadic forefather, we headed through the small, but beautiful Lahav Forest – an ideal picnic spot – towards Tel Beer Sheva. Arriving at the UNESCO World Heritage site at midday and being 'the mad dogs and Englishmen' that we are, we climbed the Tel, in the sweltering 40 degree heat, to the ancient city gates. Like our forefathers, at the gates we took advantage of some shade, and read from Bereishit – Genesis, Chapter 21 verse 25, learning of the biblical origins of Beer Sheva, which centered round a well dug and a tamarisk tree planted by Abraham. The name Beer Sheva, meaning the well of the oath, refers to the oath between Abraham and Abimelech. Walking through the four-chamber gate, across the city square and round the peripheral street, we explored the top of the Tel, the remains of settlements dating from the 10th and 8th Centuries BCE. We saw the casemate walls and the classic four room house – so atypical of the period. We visited the three storehouses or stables where hundreds of clay vessels were unearthed, and from the observation tower we had a magnificent 360-degree view, particularly over the western end of the Beer Sheva/Arad Basin. The Tel stands at the confluence of Nahal Beer Sheva and Nahal Hebron. A geological explanation as to why pre-historic settlements had been built here at the strategic confluence of the two rivers with its resultant high-water table, made it obvious why the area supported so many wells, the sinking of which was relatively easy. We explored the water system, descending carefully down a 17-meter deep shaft lined with stones and a flight of steps along its sides, into the amazing reservoir hewn into the chalk rock and thickly plastered, and through the channel that led the flood waters from the streams into the reservoir.

Leaving Tel Sheva we passed Andartat Hativat HaNegev, Dani Karavan's memorial to the Negev Brigade, which took the Negev for Israel during the War of Independence, and headed into the Old City of Beer Sheva. Discarding the planned lunch in the Old City – a choice between a picnic lunch at the shady Allenby Park or a stop at a Hummusiya on KKL street, for which Beer Sheva has become famous – we heeded the driver's recommendation of a quick lunch in a local air-conditioned mall. Azrieli Mall offered welcome relief from the relentless sun.

After lunch the bus dropped us off at the new Well of Abraham International Visitors' Center, an innovative heritage site, which tells the story of the nomad Abraham, and exhibits the famous well of water, which, according to ancient tradition, is the one dug by Abraham and where the first peace agreement was signed. The building tries to reflect the style of nomadic Bedouin tent with open sides, like the one we visited in the morning.

No visit to Beer Sheva would be complete without a visit to the ANZAC (Australia and New Zealand Army Corps) Cemetery, which is maintained by the Commonwealth War Graves Commission. I pointed out the graves of Captain Van den Bergh, the only Jewish soldier buried here, who was killed on 27 th October 1917, five days before the decisive Battle of Beer Sheva, and that of Private HT Bell, who being underage when he signed up, served under the assumed name of HT Wickham, reputedly the youngest soldier to have served and died in WWI. We heard about the Charge of the Australian Light Horsemen on 31 st October 1917, the last battle where horses were used. Unfortunately, due to a private function, we could not visit the new museum, which opened on 31 st October 2017 to celebrate the Centenary of the Battle of Beersheba.

The bus slowly made its way up Ha'Atzmaut, the center of the Ottoman Old City of Beer Sheva, established by the Ottomans in the early 20 th century as an administrative center for the surrounding Bedouin communities. We passed the preserved Saraya (seat of the Ottoman Governor) built in 1901; the central Mosque, now a Museum of Islamic Art; Allenby Park designed by Abraham Melnikoff; the original Ottoman school, now housing the Carasso Science Park; and the old Ottoman Turkish railway station built in 1905, designed by Heinrich Meissner as part of the Ottoman grand plan to run a railway line across the Negev and Sinai to reach Suez. The complex houses a small museum, a memorial to the Turkish soldiers killed in Beer Sheva on that fateful 31 st October 1917; a memorial to Mustafa Kemal Ataturk, the founder of the modern republic of Turkey, erected in 2002; and locomotive 70414, immortalized by Arik Lavi's popular 1958 song – Shir Hakatar 70414.

Unfortunately, time had passed too quickly, and with a long journey home still ahead, we headed back up the road. We had barely scratched the surface. There was so much more to see … but that's another trip.