From Africa To a Land of Hope

The issue of asylum seekers (or infiltrators, depending on your point of view) in Israel is a complicated one.

For the last decade and more, men, women and children from Africa escaping genocide, religious persecution, and a life free from the chaos existing in their home countries, have made their way with the help of paid smugglers, mostly from Somalia, Congo and Eritrea via Sinai, to Israel, enduring terrible hardships on the way. That influx has now stopped, but some 30,000 souls still remain in Israel, living a hand to mouth existence, resented and unwelcome, and fearful of a government that just wants them out, one way or another, and is doing all it can to make life as difficult as possible for them.

Of course the asylum seekers want to return home. But if they do, what will happen to them? Reports from many of those who have left indicate that their lives are in danger; that their home countries are in chaos. Even Eritrea, whose war with Ethiopia is now reportedly over, is still not thought to be safe. And so they stay in Israel, doing their best to keep their heads above water. Some don't; there are desperate women who resort to prostitution.

But there is a positive aspect too - the kindness of good-hearted Israelis. Many have come forward to help "the strangers among us".

Among the organizations which do their best to help are KavLaOved, which assists workers; Mesila, an aid and information service; Kuchinate, a woman's collective making and selling baskets and other products; the Hotline for Refugees and Migrants; Assaf, which advocates, offers psychological and social support and runs youth programs; HIAS and Unitaf, which provides child services. There are also many individuals who collect and distribute food and money to distressed asylum seekers.

Julie Fisher, wife of former US Ambassador Dan Shapiro, is one of them. (When Shapiro's term finished, the family decided to stay on so that their eldest daughter Liat could finish high school. Liat is now in a mechina pre-army program, and the Shapiros live in Raanana.)

"I'm a teacher," she says. "When I arrived here seven years ago, I wanted to do more than just host fancy lunches. I wanted to get involved with hands-on charity work that was related to my background as an educator. It seemed to me that I could use my skills helping out with small children in day care centers in South Tel Aviv. Some of them were unsafe and there were tragic incidents of children falling out of broken windows."

Once a week, she volunteered to help out in a kindergarten, and then encouraged a team from the American School to join her. A fundraiser followed – "that was my first community project." She soon discovered that other people wanted to help too, but didn't know how.

"I became a matchmaker of sorts, taking people to South Tel Aviv and introducing them to NGOs that helped with childcare, food delivery, advocacy and health care. We collected medications, which we gave to the Terem Medical Clinic at the Central Bus Station, and raised money for a summer camp program. I was getting calls every day from people here and overseas who wanted to know who to donate to, who they could visit. How could I capitalize on this interest?" 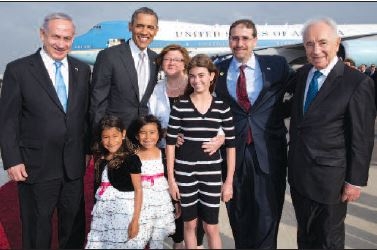 Julie Fisher, former Ambassador Dan Shapiro and their daughters, join Israeli Prime Minister Binyamin Netanyahu and President Shimon Peres to say goodbye to President Barack Obama after his visit to Israel in the spring of 2013

The result was the formation of the Consortium of Israel and Asylum Seekers, an umbrella forum for representatives of organizations and individuals within and inside Israel that coordinates what everyone is doing, channels donations and shares information. "We work to connect volunteers, donors, concerned community members, and heads of organizations in order to share information and resources," Fisher says.

The Consortium recently launched the Kibbutz Resettlement Sponsorship Initiative, encouraging overseas individuals, churches, synagogues and other organizations to join the effort. It gives them the opportunity to "adopt" a family by donating money that covers their initial resettlement expenses.

"It's become clear this is more than a band aid. It's a solution. Even though the numbers are small, the impact is large," says Fisher, who admits that every new success story moves her to tears.

The future of the asylum seekers? Who knows? But for now, those who have been welcomed by kibbutzim don't have to worry every day about where they will live, what they will eat, and whether they will be kicked out to an unknown future. And that alone justifies the program. 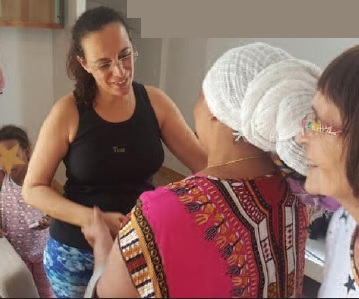 You'd be surprised. Today, as a result of an exciting and creative initiative, some asylum seekers have found safe and secure homes in, of all places, kibbutzim. Eighteen Eritrean and Somali families, mainly single mothers and children, have been adopted by kibbutz members at Maagan Michael, Sasa, Ketura, Baram and others, and the aim is to house 100 families within the next few months.

So who are these unlikely new kibbutznikim, and why have kibbutz members decided to help them?

According to Kibbutz Movement head Nir Meir and activist Dr. Avi Ofer, who initiated the program, the reason is, simply, humanitarian: these are people in desperate straits, just as we Jews once were. They wrote to kibbutzim around the country asking them "to make every effort to host and absorb asylum seekers. ... This is a decisive moment for us all and it can be our moment of pride. Please respond generously and according to our values as kibbutz members, Jews, and human beings." And to their credit, many have.

On the face of it, the program seems a brilliant solution to a very difficult problem. Kibbutzim need workers and they often have accommodation available. There are donors who are willing to help fund the program. And by moving to a kibbutz, asylum seekers are moved out of South Tel Aviv, where many residents are resentful and fearful of the newcomers. 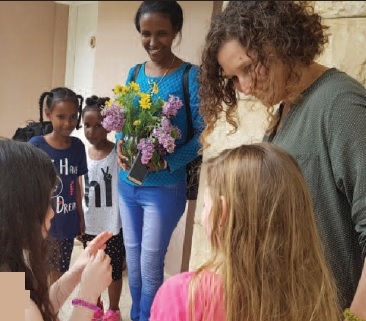 But there are also many challenges. Not only did the kibbutz members agree to adopt asylum seekers, but they chose to extend their help to those in the most difficult situations, among the weakest and most necessitous of the country's estimated 30,000 asylum seekers. Most are single mothers with children, in dire situations. Some have been traumatized by what they have suffered. Psychologically, this was not going to be easy.

Furthermore, there are bureaucratic and technical difficulties. Many potential housing units needed repair, some kibbutzim lacked childcare slots for small children, and healthcare costs are an issue. The government now demands that 20% of their salaries be withheld, as well as tax; another complication. The pieces had to be fit together like a puzzle.

In spite of that, 12 kibbutzim have now signed up, and 18 families, mostly women with children, are now gratefully living on a kibbutz. (To avoid them feeling alone and different, two families are sent to each kibbutz rather than one.)

More are in the pipeline, says Dr Avi Ofer, who has gone from kibbutz to kibbutz all over the country to explain the program and convince members to take part. He is also in touch with social workers and psychologists to choose the most suitable candidates, with input from the asylum seekers themselves, "so as not to be paternalistic".

Six months on, he says, the program has proven to be a success, albeit with some bumps in the road. The 40 resettled children are thriving, though some of the adults find kibbutz life rather quiet. Three have chosen to leave.

Genet is one such resettled asylum seeker. Escaping violence in Eritrea, she, her husband and two children made the treacherous journey to Israel through Sinai, during which her husband was killed. Genet remarried and had two other children from her second husband, who became alcoholic and left the family with no support. When Genet's sister died from cancer, she adopted her child, leaving her with five children to support – an impossible situation.

She now lives in Kibbutz Ramat David, safely and securely. The children are thriving.

Another new kibbutznik is Rahwe, who escaped from Eritrea after suffering sexual abuse in the Eritrean army, where she was forcibly conscripted. Once in Israel, she married and had two children. Recently her husband left her and she and her children became homeless. Through the work of the kibbutz resettlement program, Rahwe and her two children were moved to Kibbutz Ma'agen Michael, where she now has a job, a place to live with her children, food, and health care. A foster family has been assigned to them and Rahwe says that now her children have "grandparents" to love them.

Heartwarming as these stories are, the kibbutzim obviously can't be a permanent solution. According to Ofer, "The kibbutzim have agreed to take them in for a year, and then they will reassess. It will be a year of peace and quiet for them, in terms of health and economics. We hope the kibbutzim will continue to help them after that and at some point, we hope the situation in their home countries improve and they will be able to return."

In the meantime, thanks to the generosity of kibbutzim and many others, some asylum seekers at least, have found a safe haven.