Fright at the Opera - A Book Review 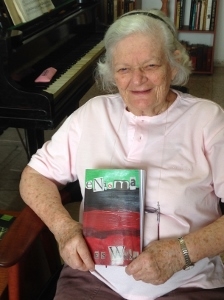 Yocheved Welber and her thriller

When Yocheved Welber, who lives in Raanana, retired from her job as editor at a research center at the age of 82 (she is now 87), she found herself not quite ready to put up her feet and take life easy. Instead, she decided to write a detective novel.

That novel, "Enigma", has now been published to very positive reviews on Amazon. The comments include, for example:

"The story line never fails to keep the interest high. The characters are fully formed. It explores the huge diversity of cultures in Israel all rubbing against each other. There is an overlay of the Onassis story of a rich man in love with an opera singer."

"Interesting to read a book about Tel Aviv that is without politics, without nostalgia and without piety, just a murder in the opera house."

"I love how the author brings in different aspects of Israeli culture together - the Israeli-Arab experience, with the mainstream Tel Aviv experience and the immigrant experience and brings them together through an interest in music and stage."

Moreover, the novel was the subject of a study group in Chicago, while an American Hadassah group is also reading and discussing it. Yocheved admits she was amazed and pleased to hear this. "I couldn't believe it. I don't know who these people are," she told me.

Yocheved grew up in Cape Cod, US, and came to Israel with her late husband Ben, a physics professor, in 1981. Although she has an MA degree in Philosophy and Political Thought, she has always loved reading mystery books. "Even when I was studying, I would give myself the pleasure of reading a mystery between reading philosophy books."

But she had never thought of writing one for herself until she came across the books of the Scandinavian writers Per Wahloo and Maj Sjowall, who combine great plots with sociological criticism. "I loved the idea that their books are more than just mysteries. They made me think about our lives here and how they could be the background for a novel. I didn't want to write about Jewish history or nostalgia, but about ordinary life, with a Jewish background.

"I was reminded of the line from Song of Songs: 'For love is as powerful as death and jealousy is as cruel as the grave.' There you have love, jealousy and death. It's a blueprint for a detective novel!"

Yocheved recalls too that for three years, she ran a course titled "Prisoners in the Bible", meeting weekly in Bedford State Penitentiary. "Surely," she jokes, "teaching in jail fits me for crime novels." And adds, "After years of editing other people's writing, I just wanted to write something of my own."

"Enigma" is subtitled "Murder in the Tel Aviv Opera" and is a whodunit about the poisoning of an opera diva during rehearsals for a performance of Il Trovatore. Among the suspects are Arab chorus singers, a Russian Mafioso and a feuding soprano. The story of a betrayal in Russia years earlier also has relevance. The characters, Yocheved says, do have bits of people she knows in them, but some are totally made up. (One character definitely reminded me of a family member, but I'm not saying who!)

Not surprisingly, Yocheved is an opera fan. She set her novel in the opera house after visiting a friend backstage a number of times, and taking the Tel Aviv Opera House backstage tour. Equally thorough in her research into police procedures and methods, she questioned police at headquarters in Tel Aviv and also in Raanana, who were very helpful. When it came time to research poisons, she emailed her daughter-in-law Jan, a doctor in the US. "Jan didn't answer me," Yocheved says. "She later told me that you just don't write about anthrax poisoning these days in emails, unless you want Homeland Security checking up on you."

Discarding anthrax as a possible poison, Yocheved chose cyanide and asked the local police how it could be obtained. Somewhat surprisingly, they told her!

The book took her almost six months to complete, and since Yocheved suffers from macular degeneration, she had to be careful not to tire her eyes. "My method was to think about the plot in bed at night and then write down what I had plotted in the morning. As the characters took shape, the events took place in my head. The plot itself is simple, but I made sure there were plenty of red herrings."

Yocheved is now working on her second detective novel, which is to be set in academia and will feature a very ominous graduation ceremony: "but I won't say more about it than that."