It may be difficult to teach empathy and compassion, but it can easily be experienced at Freedom Farm Sanctuary.

The Farm, חוות החופש, is a sanctuary for animals from the meat, dairy and egg industries. Its true purpose, however, is to serve as an educational center that sensitizes children and emotionally renews adults.

Youngsters meet animals who are recovering from physical and emotional trauma, and they learn to associate the compassion they feel with events in their own lives. This might relate to bullying, illness, or a situation where "someone who's different" needs help.

Adults are exposed to the realities of the meat and dairy industries, which we suppress in order to enjoy our food. "Un-suppressing" unfolds as we learn about animal suffering, diet-based illness, and the environmental impact of intensive animal farming and industrialized production.

"The farm is here so that every single person has the opportunity to reconsider the way we think about our food," explains Ruth Levy-Abramson, the volunteer who guides my visit. "Here we see that each animal has his or her own personality.We see them living as they were meant to live, being happy and healthy and loved."

Freedom Farm is located in Olesh, about 16 kilometers northeast of Netanya. I arrived on a late August afternoon to tour with Ruth and speak with Adit Romano, one of the two co-founders – an accomplished businesswoman who decided to change her life seven years ago by founding the Farm.

As I stepped through the gate I felt transported to an animal paradise. I was surrounded by cows, goats, lambs, pigs, donkeys, rabbits, chickens and turkeys, romping freely and being loved by adoring visitors and volunteers. I also noticed animals who were blind, lame, emotionally distressed and in animal wheelchairs; one even had a prosthetic leg.

The animals are storytellers. As we nuzzle their faces, look into their eyes and caress their scarred bodies, we understand exactly what is sacrificed in order for us to enjoy a schnitzel, a steak or a cheese omelette. We feel the depth of compassion that must be suppressed in order to enjoy our meals. And we may begin to wonder for the first time about the emotional price we pay.

"The point is to bring as many people as possible to meet the animals, hear their stories and learn the reality they would have if they were still in the industry," says Adit.

The genius of Freedom Farm is that the love we receive leads to empathy, and our empathy leads to understanding. Nobody questions visitors about their eating habits. The animals simply bear witness. What we do with the information is entirely up to us. 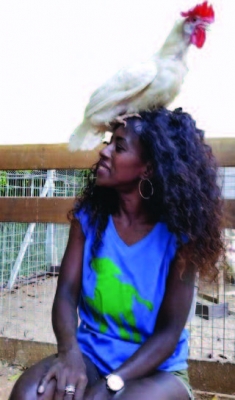 Roughly 230 million chickens and turkeys are slaughtered in Israel each year to meet demand. To achieve efficiency and profitability, "Broilers" are bred to feel hungry all the time and are constantly fed. This means they grow to four times their normal weight within 40 days, at which point they're slaughtered.The survivors I met still feel constant hunger and are fed huge salads.

The "Layers" I met had been caged wing-to-wing at egg farms and made to stand on tilted wires so their eggs would roll efficiently down a chute. Layers produce about 300 eggs per year, instead of the 18 or so they would lay naturally.They are physically spent and considered "useless" after two years, when they're killed and discarded – unless they're male, in which case they're ground up alive or suffocated at birth.

Volunteers continue to give the Farm's chickens weekly treatment for chronic pain, foot conditions, and other health issues. 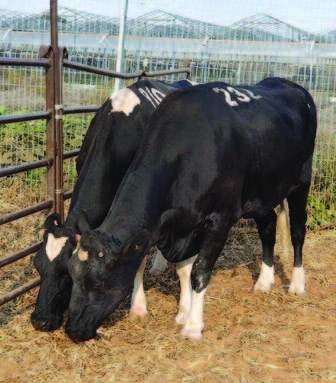 Next, I met Gali and her mother, Angela, who are dairy cows. Gali was born blind and so her dairy farmer agreed to release her to the Farm rather than kill her.

Angela was a typical dairy cow. At 14 months she began an annual cycle of artificial insemination, delivery, and separation from her calf. All the while she was milked to produce about 30 liters per day, rather than the roughly 9 she would produce if she were feeding her calf.

While the lifespan of a cow is about 25 years, dairy cows' bodies give out at about 5 due to continual pregnancies and constant milking. Most of Israel's beef comes from dairy cows and their male calves, who are slaughtered soon after birth.

The Farm staff learned that Angela was Gali's mother almost by coincidence, only days before she was to be slaughtered, and they were determined to reunite her with Gali. It required moving mountains – including a referendum among the Farm's 600,000 social media supporters – but today visitors can see mother and daughter living happily ever after.

Due to the lack of grazing land in Israel, the 140,000 cows that are bred and slaughtered for meat each year are supplemented by some 700,000 live transports imported by ship. These imports become Israel's "prime cuts".

Maayan is a survivor of the transports.Such cattle live for weeks packed together in a ship bottom, standing in their excrement and receiving just enough food to survive. This achieves the lowest possible weight on arrival, which reduces weight-based taxes and fees. The cows are then fattened prior to kosher slaughter.

This is an example of why some rabbis among all the Jewish denominations are questioning the current state of kashrut. These rabbis maintain that the industry violates the intent of kashrut, which is to avoid animal suffering and elevate our spirituality through the preparation and consumption of food. They conclude that virtually no mass-produced animal products are truly kosher.

Adit was inspired to found Freedom Farm Sanctuary by chance. She was a successful businesswoman in the beauty and organic industries, married, and mother of three children being raised as vegetarians. One day, she decided she wanted to start lecturing and turned to YouTube for some pointers. She was drawn to a title called "The Best Speech You Will Ever Hear" by Gary Yourofsky. The speech, which has been viewed over 5.5 million times, just happened to be about veganism and the meat and dairy industries.

"This lecture really turned my life upside down, and also my stomach," Adit recalls. "I discovered that for 17 years I was a vegetarian and I thought I wasn't harming animals, but I learned that I'm harming them in a very cruel way – actually, more than if I were eating only meat." 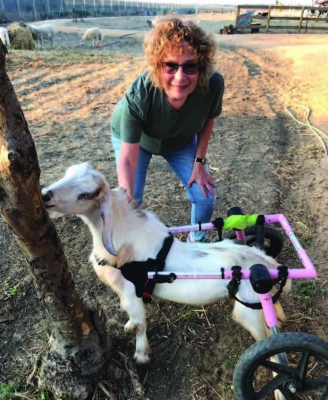 ESRA’s Maia Aron with Billy, a goat who was considered “useless” because of his disability and was left to die (Photo: Ruth Levy-Abramson)

That was her first shock, she said. Her second shock was that her closest friends, those who shared her values, didn't want to hear about her discoveries.

Adit was joined by Meital Ben-Ari, an economist for a high-tech company, and they embarked on their improbable, yet highly successful journey. They credit their mentor, Jenny Brown, for much of their success – Jenny founded an animal sanctuary in the U.S., which was their model.

Today, 250 animals live on the 5-acre Farm, which relies solely on donations to operate. The animals arrive through a variety of means, including from industry members who show particular compassion for those who were born lame and would be killed or left to die. Visitors include families, school groups, and special interest groups that range from autistic adults, to pre-release prisoners, to psychology students.

Among the Farm's future plans is to bring joint groups of Palestinians and Jews to teach that compassion toward animals is not about religion or politics; that everyone can be gentle with animals. There are also plans, budget permitting, to open a museum that exposes people to all the health, environmental and moral issues of animal-based diets through exhibitions, lectures and a vegan café.

Yet, the focus remains on maintaining positive relationships with all constituencies and conveying that it's possible for even one person to have a big impact.

"We ask everyone who comes here, do you think this is a big project with 250 animals? Do you know that you might eat 3,000 to 4,000 animals in your lifetime?" says Adit. "If you only reduce your amount of meat, you'll save more animals than this Farm will save in all the years of its existence.

"Even a single person can accomplish a lot."

Learn more at www.freedom-farm.org.il; to arrange visits in English, please email This email address is being protected from spambots. You need JavaScript enabled to view it.. Visits are by appointment only.