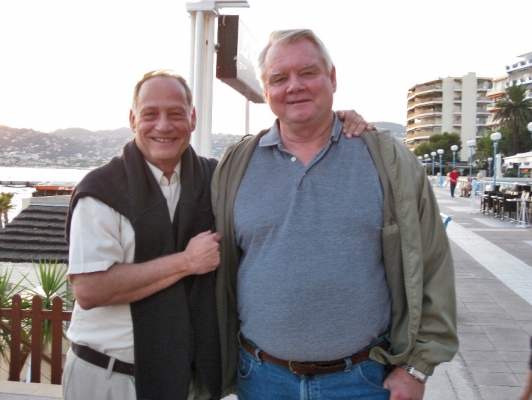 Alan Caplan and Bill Shutts on holiday in Provence, France, 2008

It is a little over two years since I lost two wonderful brothers-in-law and great friends, Gert Guttman and Bill Shutts. Both were highly intelligent and well-read men with endearing senses of humor. Warm memories of Gert, the man, are supplemented with numerous fine examples of Gert, the architect. On a day-to-day basis, his Tel-Aviv apartment and his daughters Sheli and Yehudit's homes are constant reminders to the family of his professional talents and attest to his marvelous ability to weld together the aesthetic and the functional.

Bill left behind no such concrete structures. He was an accomplished systems engineer but the contract work he did for the US Navy must needs-be remain unheralded. However, memories of some of the great hands he played at the bridge table remain as no-less-proud edifices to his bridge-playing skills. As mentioned in several of my previous articles, Bill was my bridge guru, my appreciation for his expertise going back to the time of our first encounter, some 32 years ago. I had been in Phoenix and San Francisco on business and had a weekend to spare before my flight home from Los Angeles. Although my sister Avril was not herself in the country at the time, the chance of meeting the man she was going to marry, coupled with Bill's offer of a steak dinner and a bridge tournament, was too good to pass up, so I flew down to San Diego for a night.

The steak dinner – actually a standing rib roast - proved to be as good as I had anticipated and we arrived at the bridge club early enough for Bill to introduce me around to more than a few of the players who knew Avril well. One person, in particular, was someone Bill described as "a leading player and a gentleman to boot" – a description I was soon to realize fitted Bill, himself, perfectly. I can't for the life of me remember the man's name – so I'll refer to him as Jim – but I can recall, to the card, the hand we played against him halfway through the tournament: 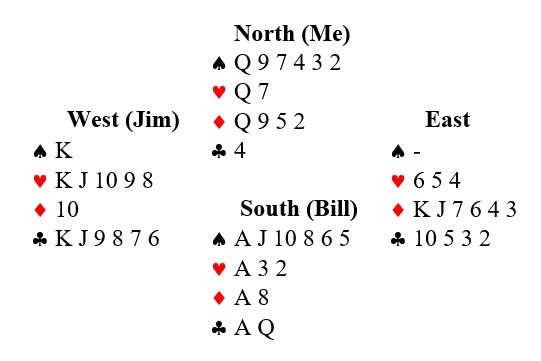 Bill, sitting South as dealer, vulnerable against non-vulnerable opponents, opened the bidding with 1♠- he was a fraction shy of a game-forcing 2♣ opener. Jim now made a conventional bid of 2♠ which was alerted as a Michael's Cue Bid showing 5 or more hearts and five or more cards in a minor suit. With 6 spades and a singleton club, I blithely made a pre-emptive raise to 4♠. East threw in a bid of 5♣ and Bill, having had enough of this nonsense, bid 6♠. To his credit, Jim did not double, and 6♠ remained the final contract. Wary of leading one of his long suits and hopeful of Bill having to finesse for the♠K, Jim led his singleton ♦10.

Bill thought for some moments, then played the ♦2 from dummy and when neither the ♦J nor the ♦K appeared from the East hand, he ducked in hand, allowing Jim's ♦10 to hold the trick. This play served the purpose of keeping East, the danger hand, off lead and giving up of the early trick was, what I later learned to be called, "rectifying the count" in preparation for a potential two-suit squeeze against West. Incidentally, had East played his ♦J, Bill would have won the first trick with his ♦A and after drawing Jim's trump, would have subsequently driven out the ♦K with his ♦8 to promote dummy's ♦Q and ♦9 as discards for his two heart losers.

As it transpired, Jim still on lead, played his singleton ♠K, which Bill won in hand with the ♠A. Bill next played his ♦A, crossed to dummy with the ♠5 to dummy's ♠7, and played the ♦Q, which was covered with the ♦K by West. Bill ruffed with ♠J and played his ♠8, overtaking with the ♠9 on the table and led dummy's last diamond, again ruffing high, this time with the ♠10. Now came the crucial play. He cashed the ♥A in his hand before using his remaining small spade to enter dummy with the ♠Q. At trick 10, he led a spade from dummy, discarding a heart from hand and leaving the following 3-card end position: 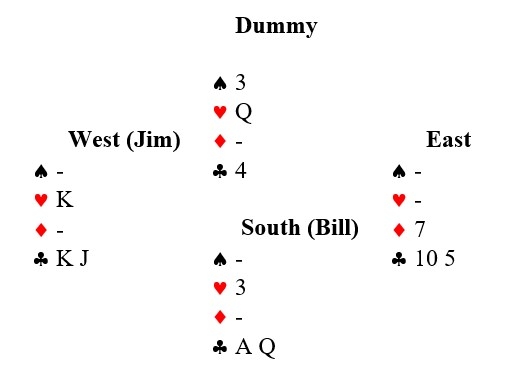 As Bill was about to lead dummy's remaining spade, Jim smiled and quipped: "Cunning devil, the old ..", Bill completing the sentence in unison with the words "Vienna Coup". Without further ado, Jim conceded the slam contract. He had been subjected to a rare kind of squeeze with a name I would have previously associated with some historical upheaval in the House of Habsburg. He had no safe discard on the play of dummy's last trump. If he discarded the ♥K, Bill would win the last two tricks with the ♥Q and ♣A, while if he unguarded the ♣K, the last two tricks would fall to the ♣A and ♣Q in Bill's hand.