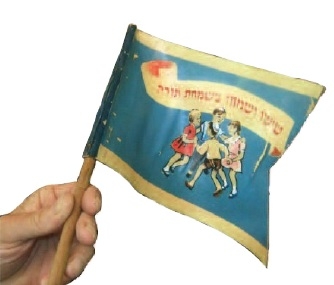 There are so many special items that are associated with our Jewish holidays – from edible specials to visual accessories lovingly crafted in the old days – but nowadays they are mass produced, ordered through the Internet or just disappeared from the holiday scene altogether.

The availability of sending holiday greetings half way across the world at the touch of a computer button has somewhat killed off much of the holiday greeting card industry. Rosh Hashanah and Chanukah cards in particular have fallen victim to modernization in a big way so, in many ways, progress has not been so progressive after all as the cards, lovingly fashioned festive flags for Simchat Torah and so many more of our traditional holiday Judaica items - that for generations have left behind a pictorial history lesson of that time - are slowly but surely becoming something of a very rich, illustrious past with a limited future.

Among the most joyous and popular items of Jewish holiday accessories are definitely the flags for Simchat Torah, as well as the spinning Chanukah dreidels that come in all shapes and sizes, silent, musical, colorful, or ear-splitting Purim rattles and the less rowdy but definitely slightly to very dangerous bows and arrows of Lag B'Omer!

"Simchat Torah flags that have been created here in Israel have documented some of the most major and dramatic shifts in society both in pre-State Israel and particularly after the State's foundation," explains Israeli Judaica collector Aviram Paz, who has scores of Israeli Simchat Torah flags, particularly from the 1960s and 1970s, in his collection.

Among the dramatic changes in Israeli society accentuated and recorded on the Simchat Torah flags is a shift from, but not necessarily ignoring, the religious and traditional foundation of the holiday. They concentrate more on the celebration of working toward and building up a state for the Jews and then, total celebration of the founding of the State of Israel with an emphasis on Jews toiling the soil, constructing communities and new towns, but also with a prominent presence of Israelis in IDF uniforms, guns, tanks and other military equipment alongside the tractors, picks and shovels - all appearing on a visually, creatively crammed with the then 'who-we-are-today' flag.

However a very prominent characteristic of the first post-State of Israel Simchat Torah flags is the outpouring of joy and celebration of being Jews in their own Jewish State, with less emphasis on religion and more on secularism. At the same time, there is a great deal of emphasis also on history and tradition – the Western Wall, Torah scrolls appearing on the very same flag where boys and girls, barelegged, wearing sandals and sun hats, energetically wave their flags as they dance around with a Torah.

There are flags lauding those, and encouraging the further enlisting of, very religious men serving in the Israeli military and yet today, haredim who have chosen to serve in the same Israel Armed Forces are vilified by the haredi communities, even attacked when passing through their neighborhoods, pelted with rubbish and vicious language used against them.

"Since the beginning of the 1900s, flags for Simchat Torah were beginning to be prepared on different types of material, using different methods of printing. Sometimes the name of the illustrator would appear in a bottom corner somewhere," explains Aviram as he slowly turns the pages of a large, plastic double page thick folder containing flags made of material, paper, card and very thin linoleum.

One of the signatured flags in the album was designed by artist David Gilboa (1910-1976). Born in Romania, Gilboa studied at the Academy of Fine Art in Bucharest before making aliyah to Israel in 1933 and settling in Safed. He became one of the founders of the famous Artists' Quarter, where to this day, scores of artists can be found designing, printing and painting modern Judaica of both religious and secular nature.

The Simchat Torah flags, with so much fine and colorful detail, are pages of history on a stick – although most today are without the latter part.

Aviram and this writer are both members of the 1920s Jezreel Valley secular kibbutz of Mishmar HaEmek, one of the flagship kibbutzim of the Hashomer Hatzair movement and a neighboring community to Moshav Midrach Oz, founded by religious Yemenite immigrants in the early 1950's.

Every year at Simchat Torah, with their own homemade and designed flags on a stick, children and adults from the totally secular but multi-succah building kibbutz but a world apart in ideology join their religious neighbors a few kilometers down the road, , for the joyous Hakafot HaTorah celebrations.

Simchat Torah has always been a celebration that secular Jews were attracted to be part of. Both in Israel and the Diaspora, many will go to a synagogue in the evening to soak up the joyous atmosphere and celebrate together the fact that we are who we are, proud to be Jewish.

Here's a taste of the exhibition of flags for Simchat Torah festivities: specially produced on material, card, plastic, and thin linoleum  (from the collection of Aviram Paz)  (photos by Leonid Pedrol).