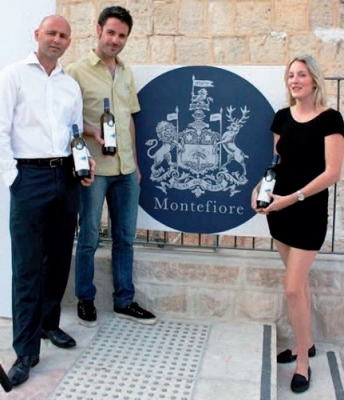 Briton Moses Montefiore, was one of the most prominent Jewish philanthropists of the 19th century. One of his passions was sponsoring Jews living in the Ottoman- controlled Jerusalem. Moses built a windmill outside the Old City that still bears his name, and he encouraged the residents to plant vines for wine as well as olive trees. He was said to have drunk a bottle of wine a day and lived for over 100 years. His fondness for Jerusalem led him to have the city's name in Hebrew engraved, embroidered and inscribed next to his family crest, on his linens, his silverware, his stationary and on as many other of his wide array of possessions as possible.

Montefiore never moved to Israel and would have no children of his own, but his nephew and heir, Joseph Sebag Montefiore, would eventually sire a branch from which his descendants four generations later would make aliyah (in 1989). Adam Montefiore would move with his wife Jill, and their three children (Liam, David and Rachel) from the United Kingdom and settle in Anglo-friendly Raanana.

Adam had been established in the wine and spirits industry in the UK before moving to the Holy Land. Adam's career in the Diaspora was well suited to his becoming a marketing executive, first for the Golan Heights Winery, and then for the Carmel Winery where he has worked for the past decade. Two of his three children, Rachel and David, would also enter the industry and join with native-born Israeli Arnon Geva to establish the Montefiore Winery which was launched early in 2013. Adam's brother, Simon Sebag Montefiore, would write Jerusalem: The Biography, considered by many to be the most objective and authoritative account of the Holy City, which has been a focal point for three faiths, and once again the capital of the Land of Israel.

After securing a hosting facility (the Mony Winery) and a consulting winemaker (Sam Soroka), Montefiore Winery released their first wines. As a team, Rachel, Arnon and Sam plan and taste the wines together. Before the harvest they plan a philosophy of what kind of wines they want to make and what they need from the grapes to deliver that kind of wine. They then taste the wines soon after fermentation to determine what aging regimen, if at all, each wine should undergo, and finally, they taste again, before bottling, for any final blending or filtering decisions as well as on how long they should age the wine in the bottle before its release. The winery is averaging 20,000 bottles a vintage, with plans to expand production.

Their 2012 Montefiore White 92 points, K, (NIS 60) is a white blend of 70% Colombard and 30% Chardonnay. The Colombard contributes crisp acidity, with the fruitier, rounder Chardonnay providing body as well as green apple and an array of citric notes such as lemon-custard, mandarin-orange and ripe pineapple enhanced by a pleasantly lingering crisp acidity with cool mineral undertones with a medium body. Ideal food pairings include ceviche with the aforementioned fruit or an Asian chicken salad with mandarin oranges. Imagine tasting this wine on a sailboat off a Greek island with caviar or foie gras, or as a crisp citric complement to fresh fish at one of Tel Aviv's seemingly endless sites for sushi.

Their 2012 Montefiore Red 88 points, K, (NIS 77) is an unoaked red blend of Malbec (34%) Shiraz (33%) Petite Sirah (33%). Black raspberry, blackberries, a tinge of blueberries with some black walnut accents were observed. It can be chilled like an unoaked Beaujolais Nouveau or at room temperature. I would try it both ways as well as right from the bottle and decanted. These three powerhouse grapes are like a purple fruit punch to the face and such a young red (not made through carbonic maceration) doesn't hide its tannins, so I envisage a fatty juicy burger, a black pepper spiced beef or lamb stew or BBQ chicken wings as nice matches. The tannins are quite tamed when served chilled, but if you're having grilled meats you may want the tannins to play off the fat or charcoal flavor of whatever meat is served.

Their 2010 Montefiore Petite Sirah 91 points, K, (NIS 145), like all their wines currently have their grapes sourced from the limestone-laced Judean Hills. Aged in French oak barrels for 14 months, this wine sports a modest 13% alcohol. Dense blackberries (so dense that you feel like you might be picking them later off your teeth) with a creamy body, notes of cedar and tobacco leaves makes for a wine that screams for grilled meats, or possibly duck with cherries. At this stage it benefits from a lengthy decanting.

The 2011 Montefiore Petite Sirah 92 points, K, (NIS 145), I would try a couple of months later. This wine, being younger when I tried it than the 2011, was closed on first tasting, but letting it decant (even overnight) did wonders. It's a great wine now to stand up to grilled meat or a BBQ sauce or heavy gravy. It has similar notes to the 2010 but is a bit more balanced with acidity, less creamy and hence, I think, a bit more food friendly.

The 2011 Montefiore Syrah 92 points, K, (NIS 135) which is also aged 14 months in oak, French and American, sports notes of raspberry, blueberry, forest floor with a sense of smoke and dark coffee, is more earthy, accessible and complex than the Petite Sirah but more nuanced in its expression of fruit.

In addition to these wines, they have a single varietal Cabernet and their 2011 Kerem Moshe, K, (NIS 270): a Cab, Petite Verdot and Syrah blend coming out later this year as their premium level reds.

Maybe one day when many of us hear the Montefiore name we won't think first about the legacy of the 19th century benefactor but of the delicious 21st century wines sporting the same moniker.