Evangelicals Standing up for Israel 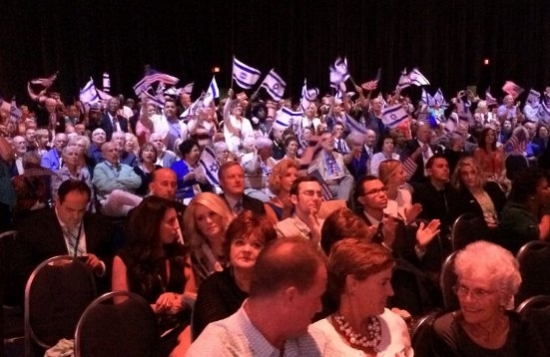 In 2006, Pastor John Hagee felt that Israel was going to need someone to stand with her, so he called together 400 Christian leaders and his good friend, Rabbi Aryeh Scheinberg, to help form a national grassroots organization from each state in the union to go to Washington as Christians to stand up for the state of Israel. And so Christians United for Israel (CUFI) began.

We are veterans of seven AIPAC (American Israel Public Affairs Committee) Policy Conferences during which we lobbied Congress on behalf of Israel. But we now live in Israel during the time when those conferences are held. Thus, when Pastor Victor Styrsky invited us to attend CUFI's National Summit as his guests, we accepted the invitation and made our travel arrangements for the Capitol city.

For those of you not familiar with the perhaps uniquely American system of "lobbying," the term comes from when those seeking to influence their elected officials would corner them in the lobbies and halls of the Congressional office buildings. In actuality, at these conferences the sponsoring organization attempts to set up specific meeting times for constituents with their respective members of Congress.

Pastor Hagee was one of the keynote speakers at the AIPAC Policy Conference in 2006. His message was so powerful, so heartfelt and so passionate that he received, from the 7,000 attending that year, a standing ovation equivalent to the one given PM Ariel Sharon the previous year. Alan and I had also attended a breakout session set up as a "town hall meeting" with three additional evangelical ministers. Conference goers were invited to come to the microphone and ask tough questions, which they did. From each of the ministers, as from Pastor Hagee, the answer was the same. "We do not want to convert you. We love Israel because the Bible tells us to." And then they quote Isaiah, "God blesses those who bless Israel."

In ten years, CUFI has grown from 400 Christian leaders to 2.2 million members in all 50 states of America. It is the largest pro-Israel organization in the world … and it is still growing. Pastor Hagee says, "During the last crisis of the Jewish people, Christians were silent; this time, not on our watch!"

Our personal connection to CUFI began five years ago in Connecticut when we met Pastor Styrsky, the east coast director, and hosted a luncheon for him to meet leaders of the state's Jewish community. Through them, he was introduced to an African-American pastor with a 10,000 member congregation, from which he drew 2,000 attendees at "A Night to Honor Israel" in the Hartford area.

The entire focus of the 10th National Summit this July was to "stop the bomb!" We were proud to stand with 5,000 evangelical Christians and to go with them to Capitol Hill to try to influence our members of Congress.

Announced at this summit was a new arm of CUFI—Washington Action Office that will be able to lobby Congress on a daily basis on CUFI's one issue: Israel. It is so much more effective for Christians to argue for Israel on our behalf. Soon, a branch of CUFI will be inaugurated in London, where the first "Night to Honor Israel" was held two years ago.

The timing of this conference could not have been more significant. On the morning of the very day we were scheduled to lobby our members of Congress, the P5+1 had signed an agreement with Iran.

Pastor Hagee said, "You have the chance to tell Congress, 'Stop the bomb! Vote it down!'" Yes, he was fired up. And people stood to applaud and, being a Christian group, shouted "Amen!"

He quoted St. Paul: "You do not support the root; the root supports you. That root is Abraham, Isaac and Jacob. If it weren't for the Jewish people, none of us would be here."

And, he said, "After 4000 years, it's time for Washington to get the message that Jerusalem is the capital of Israel."

In addition to the first CUFI film on Israel and a Sunday reception for Jewish guests, the Monday and Tuesday summit included many speakers, both from CUFI's executive board and from Israel. We heard from six of the so-far sixteen Republicans running for US president in 2016 on a panel moderated by Wall Street Journal Pulitzer Prize-winning journalist, Bret Stephens, as well as from members of the United States Congress.

Prime Minister Netanyahu spoke via video. Also during the Middle East Briefing, Lt. Tzur Goldin, twin brother of Hadar Goldin who fell in Gaza in 2014, made an appearance to ask CUFI's help in bringing home the body of his brother. At the Monday night gala, "A Night to Honor Israel," an event that CUFI produces in cities around the United States, the 5,000 attendees waved Israeli and American flags while a huge church choir sang "The Star Spangled Banner" and "Hatikva." Between songs, both Christian hymns and Hebrew melodies, ministers from CUFI's board and directors spoke about Israel.

Day 2 of CUFI National Summit—a view from the Hill

About 7 a.m. as we were leaving our hotel room for the second day of the summit, it wasannounced on the news that a deal had been signed with Iran. Talk about timing! Summit attendees were to be bused to Capitol Hill to attend meetings with our respective Congresspeople and Senators. There was one issue only on which we were to convince our members of Congress: VOTE AGAINST A BAD IRAN DEAL.

We lobbied together with members of an evangelical church in our state of Massachusetts from whom we couldn't be more different, but we were on the same page when it came to our love for Israel and our strong desire to get Congress to disapprove of this bad deal with Iran.

We followed up our efforts in Washington DC with a memo to Pastor Styrsky detailing our experiences in each of the three Congressional offices where we met with aides of our Congresswoman and two Senators. We sent thank you letters to each of those aides, reiterating our objections to the Iran deal after learning more of the details. With members of our Massachusetts synagogue's AIPAC committee we will be arranging for private meetings with our Congresswoman and Senators once the Congressional session is over in August.

When Israeli friends ask us why we still live in the United States for nearly half of each year, we point to activities like the Christians United for Israel National Summit as well as our other activist doings as things we can do for Israel abroad that we cannot do in Israel itself. Sometimes it pays to be both American and Israeli citizens.