By Anthony Green and Cynthia Barmor 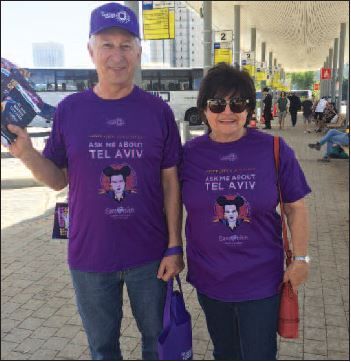 They were more than willing to give of their free time to welcome Song Contest fans as they arrived in Tel Aviv and provide them with helpful information and guidance.

The ESRA volunteers included Rhona and Eric Berzack, of Modiin, who were stationed at Savidor railway station. Kitted out with appropriate T-shirts and baseball caps, the duo handed out leaflets as fans arrived by train after flying in to Ben-Gurion Airport. Said Rhona: "We spoke to quite a few visitors and gave out a lot of literature about Israel, and also Tel Aviv. The visitors were mainly from Europe, and not all could speak English. There were a lot of Israelis who wanted the information too. It was interesting talking to them. Many said they were excited about being in Israel." 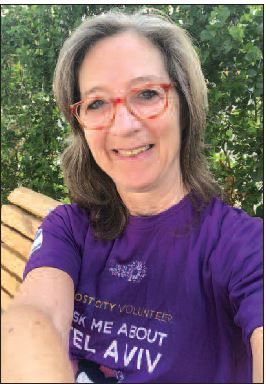 Rhona added: "However, I later heard a lot of complaints about the price of the tickets and what hotels were charging."

Other ESRA volunteers noted that "it was good to feel part of Israel" … "great fun" … "interesting" … "good to meet other volunteers and people from around the world".

The event in May made every Israeli proud: super professional and expertly organized, it was a visual extravaganza that had TV viewers "kvelling" with "naches".

As a thank-you, the contest organizers invited ESRA volunteers to attend the Final Rehearsal – "an unforgettable experience", said one participant enthusiastically.

This volunteer program is one of the joint ventures in which ESRA collaborates with the Tel Aviv Municipality, specifically the Department for English Speaking Olim, which expressed their appreciation of ESRA's participation and professionalism in arranging this initiative.