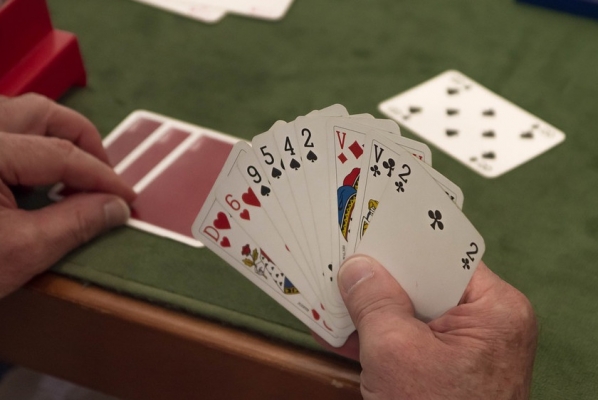 In essence, the term elimination in bridge applies to a series of plays by the declarer leading to an endplay in which the opponents are given the lead, "thrown in" so to speak, at a point where they have no safe exit and whatever suit they chose to play will be to declarer's advantage. Elimination plays may be pertinent to No-Trump contracts but they are both more difficult to construct and apply less frequently than to suit contracts. In the latter, trumps are drawn, leaving at least one trump in each of the declarer's hand and dummy, and the cards in two of the three side suits are eliminated from both hands prior to the throw-in. The opponent winning the trick is endplayed into either leading a card in the third suit to the declarer's advantage or playing a card from one of the eliminated suits, giving declarer the ability to ruff in one hand and discard a third-suit loser from the other – a so called "ruff and sluff".

The importance of the elimination play as one of the most powerful strategic weapons in the armory of a successful declarer has been the focus of several of my articles in the past. So why am I revisiting it? Well, to be honest, it is only over the past year or so that I have become increasingly aware of how often the need for the play arises. Case in point: Looking over the 48 hands my partner and I played in two successive tournaments at our local club last month, elimination plays were relevant in no less than 7 boards, resulting in good, near-top, and even top scores for us. So I'm bringing the subject to the table once more in the hope that you, the readers, will be able to engineer similar successes in the future.

Consider the following hand in which my partner, sitting in the South seat, became declarer in 6 Spades after West, the dealer, opened the bidding with 1 Heart:

Partner won the opening Heart lead with the Ace in dummy, and noting that she had potential losers in both minors and that West, from his opening bid, was marked with the missing high Diamonds and the ♣Q, went about setting up an endplay. She drew one round of trumps with the ♠A and then played a small Spade to dummy's ♠10, allowing her to lead a Heart from the table which she ruffed high in her hand. Next came a Club to dummy's ♣A, followed by dummy's remaining Heart, which she again ruffed in her hand, thereby eliminating Hearts from both hands.

The play of the ♦A, followed by the ♦J, eliminating Diamonds from both hands, sealed West's fate. He won with the ♦Q but was well and truly endplayed into having to lead a Club into Dummy's ♣K, J or play one of the red suits. In the latter case, Declarer would ruff in her hand and discard dummy's losing ♣J. In either case, the slam contact was assured.

It's relatively easy to keep focused when the stakes are high in slams or games but one tends to become complacent in the case of less glamorous part-score contracts. In the next hand, South is again declarer after West opened the bidding with 1 Heart, but this time the contract is a modest 3 Spades:

With 1 Diamond loser and 3 Club losers the contact is always safe. But one should not be complacent. The hand offers an important overtrick if you keep your wits about you. It has become second nature to me to make elimination plays on hands like these. So, after drawing trumps and eliminating Hearts from both hands, I cashed the 2 top Diamonds, leaving the following position:

When I now threw the opponents in with a third round of Diamonds, West won with the ♦Q and had no way of preventing me from making an overtrick. Even if West had been wily enough to throw his ♦Q under my ♦K, allowing his partner to win the throw-in play with the ♦10, I still would have been able to restrict the opponents to 2 club tricks.

Playing in Match Point (Top-Bottom) tournaments, making an overtrick in a part-score could be worth as much as bringing home a difficult game or slam. In either case, hopefully this refresher in elimination plays will empower you to avail yourselves of the opportunities afforded by such plays to bring in lots of good scores. Good luck!