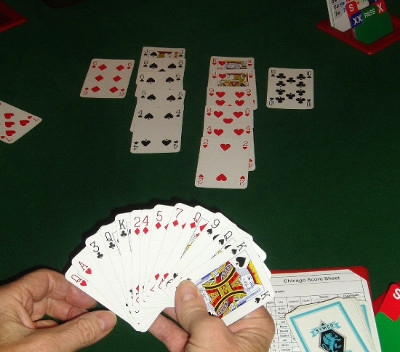 In a recent conversation over the bridge table, the often repeated question arose once again: "How come expert's finesses seem to go right when mine don't?"

In one of my earliest articles (ESRA 154), I wrote that a possible answer was that experts routinely looked for ways to avoid taking finesses. Simply put, the fewer the finesses one took, the smaller the chance was of guessing wrong. I went on to introduce a very valuable technique, called an elimination play, which I suggested should become a routine weapon in one's bridge armory.

In revisiting the subject, I will draw examples from two hands which came up in a recent club tournament, one of which I played properly, a slam contract, and the other, a part-score contract, where I failed to find the correct play.

In the first of the two hands, I was dealer in the South seat, not vulnerable against vulnerable opponents and opened the bidding 1 Spade with ♠ A J 10 7 2 ♥ A J 10 7 ♦ 3 2 ♣ A Q. My partner jumped to ¨4 Spades, a semi-preemptive bid as we play it, showing at most 11 points and, normally, 5 card support in my suit. I am a little embarrassed to say that I considered my hand good enough for slam and bid 6SP without further ado.

West led the ♣ J and when dummy came down with ♠ K 9 5 4 3 ♥ K 9 5 ♦ 4 ♣ K 9 7 3, I was both surprised to see that a diamond had not been led and pleased one hadn't, because I now had an iron-clad way of bringing home the slam without having to guess the location of the ♣Q: I won the opening lead in my hand with the ♣ Q and drew trumps in two rounds. I then cashed the ♣ A, crossed to dummy with a trump, played dummy's ♣ K on which I discarded a diamond from my hand and followed with dummy's last club, the ♣ 9, which I ruffed in hand. At this point, I was down to 6 cards in each hand. I had eliminated clubs from both hands and reduced the diamond holding to a singleton in my hand, leaving the following situation:

Now when I led the diamond, it didn't matter which opponent won the trick. Whoever did so was faced with the Hobson's choice of either leading another diamond, which would enable me to discard a heart from dummy and ruff in my hand (a so-called ruff and sluff), or lead a heart, giving me a free finesse. In either case, the slam contract was safe.After the tournament, I looked up the scoring of the hand. Of the 12 times the hand had been played, only 5 couples had bid the slam, and of the 5, only 3, including ourselves, had made it. Being a match-points competition we got a very good score for the board: 90.9%.

Several boards later, I found myself in the same situation, not vulnerable against vulnerable opponents with ♠ A 10 9 7 6 ♥ A 7 5 ♦J 7 2 ♣ A 6. I opened the bidding with 1 Spade, my left-hand opponent doubled for takeout, my partner raised to 2 Spades and that's where the auction ended. West led the ♣Q

I won the lead in my hand with the ♣A and drew two rounds of trumps ending in dummy with the ♠ K. I was relieved when both opponents followed in trumps as the contract was now safe with at most 2 losers in hearts and 3 in diamonds. I decided I could,in fact, make an overtrick by finessing hearts from dummy twice. If the heart honors were split between the opponents – normally a 75% chance –I could limit the heart losers to 1. So thinking, I led the ♥ J from dummy and finessed when East played low. West won with the ♥ Q and returned a club which I won with dummy's ♥ K. I now led the ♥ 10 and finessed hearts again. Alas, West won with the ♥ K and I had to content myself with making the contact without an overtrick. The full hand was:

As you may see, I had missed a simple elimination play. At trick four, after drawing trumps, rather than lead a heart, I should have played dummy's ♣K, followed by club ruff in my hand, thereby eliminating that suit, and then the ♦ J from my hand. The best defense would be for East to win with the ♦K and return a heart which I would allow West to win. However, after cashing two diamond winners, West would then have to lead a heart from ♥ K 8 2, giving me a free finesse in that suit, or lead a club, conceding a ruff and sluff. Either way, I would have come to the overtrick. How important was that? Well, as it turned out, 5 of the 12 pairs made the overtrick and scored 81.8%. Our 2 Spades just making without an overtrick was worth a lowly 27%.

After the tournament, it occurred to me that my declarer play is generally pretty good in high-level contracts – I am apparently more focused – but I tend to be more complacent, even lazy, in my thinking when playing part-scores.Perhaps that's true for most of us. We are often successful in the big battles but lose the war through failure to win the skirmishes.

As I must remind myself: Be diligent in your declarer play even in the seemingly innocuous hands. Elimination plays have a way of presenting themselves more often than one thinks.