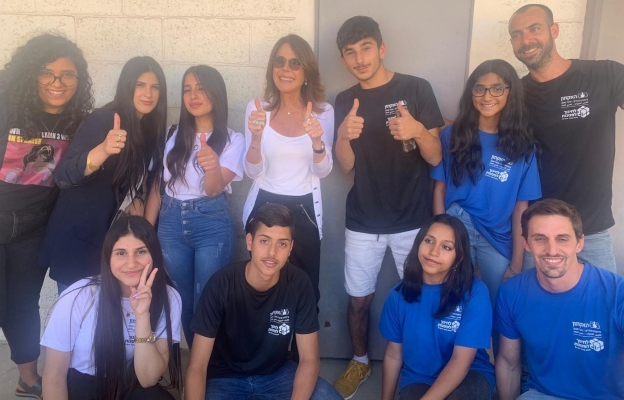 Shula Recanati and participants of the organization

Sadie Cohen, mother of the first Jewish President of the United States (so the story goes), was having her hair done in New York for Thanksgiving. "My son offered me a taxi to the airport, a flight on Airforce One to Washington, a helicopter to avoid the traffic, and accommodation at the White House," she confides, diffidently, to her hairdresser. "But I'm going to my other son," she announces, her voice swelling with pride. "The doctor."

Jewish moms and dads are renowned for the emphasis they put on education. Throughout history, Jews have felt the precariousness of their position in the Diaspora; education often provided a passport to survival. But in Israel, ironically, a top notch education is not assured for everyone. Too many children on the periphery of the country, or from underprivileged backgrounds, fall between the cracks and land up in menial jobs or on the streets, unsure of themselves and not contributing to society in any meaningful fashion.

Shula Recanati, a slim, elegant Clinical Psychologist with a PhD in Social and Organizational Psychology from Columbia U, who was a managing partner in a Private Hi-Tech Equity Fund, seems about as far away as you can get from the disadvantaged and disenfranchised. Yet, raised by her Holocaust survivor parents in Tel Aviv, she grew up imbued with the values of humanism and caring for those in need. Then, some twenty years ago, over lunch with a friend, she turned into an angel. At that time a few university students, in return for a stipend, were working in a shelter in Tel Kabir with a small group of kids of immigrants from Buchara. One of the students' fathers invited Recanati to join him on a visit to his daughter. "We walked down some dark stairs into a cellar with very little light," recalls Recanati, "and we saw these kids with a sparkle in their eyes, loving the fact that they were learning." There and then she undertook to expand and run the program; a decision that has turned into her life mission.

According to Recanati, who has two children of her own, out of the two and a half million children in Israel, a third live under the poverty line. That's some 800,000 children whose dinner is not always assured. Nor, obviously, is their hope for a decent education. "Educating for Excellence" (E4E) has stepped into this space; the last two decades have seen 9,000 students participate in the program in fifty-three centers around the country. Six of the one thousand graduates are studying medicine, many are in high tech and education, many more become role models as siblings and community members follow their path.

E4E's unique program embraces and nurtures its students from age eight until twenty-eight. First of the four pillars is actual teaching; reinforcing educational skills is key. University students (many of them E4E graduates themselves) are screened and trained to mentor pupils in four weekly intensive study meetings of four hours each in the STEM subjects – Science, Technology, English and Math – as well as 21st century skills like decision making, team building, out of the box thinking, and problem solving. Pillar Two takes kids to operas and ballets and museums, mentors pass on their love of jazz guitars or capoeira or surfing; trips to the Wailing Wall and Yad Vashem introduce kids to the culture and ethos of the country. Pillar Three builds self-confidence, dares the pupils to dream, and empowers pupils like Lisa to turn those dreams into reality.

Lisa's parents emigrated from the USSR with no Hebrew, worked in badly-paying jobs and could give her no support. Through E4E Lisa finished school with a good Bagrut, flourished in the army and now works as a programmer for WIX; until today she is in contact with Racheli, her mentor, with whom she swaps recipes and WhatsApps about life.

Pillar Four of the program focuses on giving back: pupils work with the sick or aged in their communities, or help other disadvantaged kids. And a Parents' Program provides E4E parents with tools to nurture and support their kids. It's a Pay-It-Forward Circle with a huge impact, a winning model which makes a difference, according to Recanati, in both the lives of the children and the country.

At eighteen, when participants are done with school, mentors from elite army units or business sectors take over, guiding the youngsters through military service, university and the beginning of their work experience. Barak Regev, CEO of Google Israel, for example, is on the Board of E4E and enthusiastic about the potential to scale up the impact of the program to change the face of Israel. "With such potential here for more and more high-tech opportunities, we have a constant shortage of qualified employees," he claims. "E4E produces future leaders, which will benefit us all."

With a shoestring budget of 30 million shekels a year, E4E has a significant impact. Just over a fifth of the money comes from the Ministry of Education, which has partnered with E4E for the last decade. The rest is funded by the business sector, philanthropic organizations and individuals, with about 2,000 volunteer mentors weighing in with support and employment for graduates.

Recanati aims to broaden the activity and reach many more children and communities in need. She envisions building a national initiative and expanding the collective impact partnership of E4E, the Israeli government, business and philanthropy. "To increase our impact on the strength and resilience of Israeli society our aim is to turn Israel from a Start-Up Nation to a Scale-Up Nation."

A spin-off of this astonishing initiative is to build a shared society, where all segments of the population can meet and learn from each other. Almost a third of the participants are Arabs and Bedouin, many are Ethiopian and Russian immigrants, and outreach efforts are being made to reach Druze and Haredi pupils in the near future. Three of the centers are mixed; Arab and Jewish children study together. Fifty-eight percent of the students are girls; gender inclusion studies promote confidence building and leadership for women, offering an alternative to the early marriage and high-school dropout syndrome of girls from low-income and conservative/traditional communities.

In the meantime E4E students are weighing in with solutions for creating a more equitable society in Israel; a recent Hackathon saw Jewish kids partnering with the Arab counterparts to create a weekly shuk in Jaffa for marketing joint products, while Bedouin pupils suggested a sports center for Arab women who are normally barred from local gyms.

It's difficult enough to become a doctor, or a high tech maven, or a teacher, with no home support or background; it's well-nigh impossible to study when you're hungry. All E4E activities begin with a hot meal; for many of the students the only one of their day. As Sgula, a graduate of the program now working in Israel advocacy explains, "as a graduate of E4E I am now living the dream that I didn't even know existed."

To find out more, and to become part of the dream with a variety of volunteering options, please visit https://www.e4e.org.il/join-us/students-counselors/