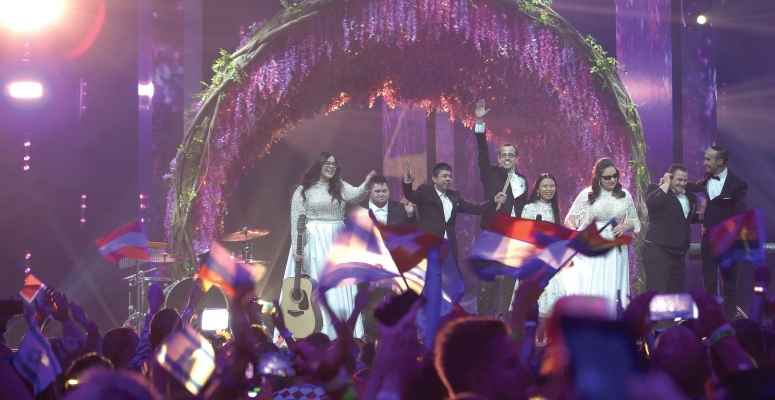 In the summer of 1970 the eighteen year-old straight A student and ace-sportsman reluctantly landed at Lod Airport to visit the land of his forefathers, which he considered an Apartheid state. A few days into his trip, hot and sweaty on a Number 9 bus in Jerusalem, he plonked himself down next to a fellow with a long beard, in an enormous black hat. The Hassid invited Samuels home for Shabbat. And that was that.

Kerry changed his name to Kalman and plunged into ultra-Orthodoxy without a backward glance. He swapped Philosophy and Mathematics at the University of British Columbia for theological studies in Jerusalem, and, aged twenty-one, he married Malki, an eighteen year-old Hassidic beauty, fluent in six languages. The couple went on to have six children in just over six years, and a seventh some 17 years later. All in all the Samuels could have been just another Hassidic dynasty; a large, happy family living peacefully, studying sacred texts. 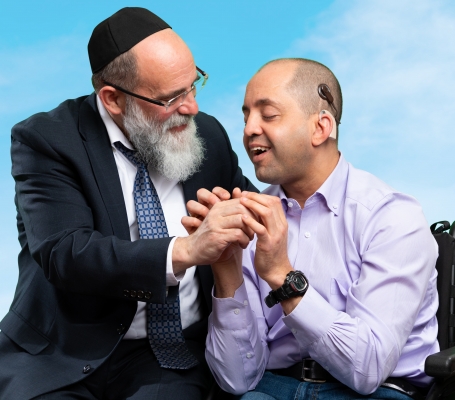 Yossi and his dad, Kalman

he ir But life took a different turn. "Dreams never Dreamed" follows the struggle to cope with a normal, happy one year-old who, immediately after his tainted inoculation, became so terribly challenged. The family relocated to the United States and then returned to Israel, driven by one force only: to get the best help and treatment for Yossi. And as they visited one unsympathetic doctor after another, and were stonewalled by professionals who wouldn't admit that the Health Ministry had made a ghastly mistake, Malki Samuels vowed: if we manage to enable Yossi to communicate we will dedicate our lives to helping other families cope with children with cognitive disabilities.

I knew that this story would have a happy end; like millions of people I saw the Shalva Band rock the Eurovision, and I'd heard about the wonderful work the Center does in Jerusalem. Still, I read the book shaking. Kalman Samuels, in easy, chatty prose, documents an ordinary life made extraordinary by circumstances, with one astonishing anecdote after another.

Yossi did learn to communicate – a combination of his parents' determination to do everything on God's earth possible to help – and a set of miracles that came together to change the course of thousands of lives. After consulting with countless doctors and professionals in Israel and abroad, the Samuels finally got to Shoshana Weinstock, a special education teacher. In an Anne Sullivan moment Weinstock painstakingly got through to Yossi that all things had names: a table can be signed into the palm of a hand as a "table." Once the eight year-old, who had been languishing in a silent, dark void for seven years of his short life, grasped that concept, there was no stopping him. Soon dubbed the "Helen Keller of Israel" Yossi, with the help of a gifted speech therapist, actually learnt to talk Hebrew, and then read Braille. With a prodigious memory and a bright, friendly personality, Yossi was soon surrounded by friends and conquering one hurdle after the next. He learnt to ride a horse, flew with friends to Thailand where he rode an elephant, and met with Gordon Brown, George Bush (at the White House), and President Reuven Rivlin. He had his Bar Mitzva, belting out his parasha with aplomb. He harnessed his heightened sense of smell to become a sommelier, eventually making his own red and white wine – sold in Israel's Duty Free shops - with an "I love you" sign on the bottle as well as his name and a text in braille. Today, aged 43, unable to see or hear or walk, he works putting Easy Passes together, and is a contributing member of society.

And through it all, step by miraculous step, Malki and Kalman built their dream. Shalva started in the apartment next door to their family home; Malki fetched the initial six children each day after school herself, cooked their food, organized the therapists and volunteers. When the demand became too great she declared that her own family must move out of their home to double the space for the center. A special needs child changes a family's dynamics; Malki was determined to start a sleepover program so parents could have a night "off." Kalman, with zero experience in fund-raising, set off to raise millions of dollars.

It is hard not to see the hand of God somewhere in this story: a chance encounter on a plane next to a hippy-type character, a casual conversation in a Vancouver shul – these and more led to mega-bucks for Shalva, and mind-boggling successes. Kalman recounts his journey with humor and delight: as a young man he had renounced higher education and earning money for a life of holy studies; suddenly he was faced with the need to make money for his family plus the extra challenge of running Shalva. During their short stay in the States Kalman dived into the nascent computer field; back in Israel he was hired by Binational to run their Wang mini-computer which was housed in a partitioned, climate-controlled area. Ezer Weizman, then Minister of Science and Technology, toured the company, and was astounded to see Kalman standing next to the sophisticated apparatus in his black Hassidic garb. "What do you do here?" asked Weizman, in a tone that implied "You can't do very much." Kalman didn't miss a beat. "Our director is very concerned that our computer system should function properly," he deadpanned. "So he pays me to pray for it from dawn to dusk."

Cute as this anecdote is, it epitomizes Kalman's laid-back charm and coping skills - sometimes stretched to superhuman degrees. A long, drawn-out court case against the state of Israel for the faulty vaccination which finally ended being settled out of court, the rapid, astonishing development of Shalva which kept expanding into ever bigger premises, the creation of the glorious Center that now stands in the center of the world, in the middle of a serene park in Jerusalem, the multitude of programs for over 2 000 individuals with disabilities – Jews, Arabs, Christians, religious, secular and anything in between – programs for "Me and My Mommy," sports including judo and soccer, hydrotherapy, inclusive education programs, summer camps, oral health treatments, vocational training, a team that runs in the Jerusalem Marathon – the list goes on and on and on. The center in Jerusalem includes sleepaway facilities for kids, six apartments for adults, therapeutic pools and gyms, kindergartens, a café serving the most scrumptious delights, a shop, a shul, and artwork by Menashe Kadishman, David Gerstein and other Israeli greats. Every gorgeous inch of the spectacular $60 million building has a story … read "Dreams never Dreamed" and find it all out.

In these challenging times this story is more moving than ever – how two young parents, initially with no clue about fund-raising or construction or special needs – turned their own pain into an enterprise that has improved the lives of tens of thousands.

Rush to order the book. 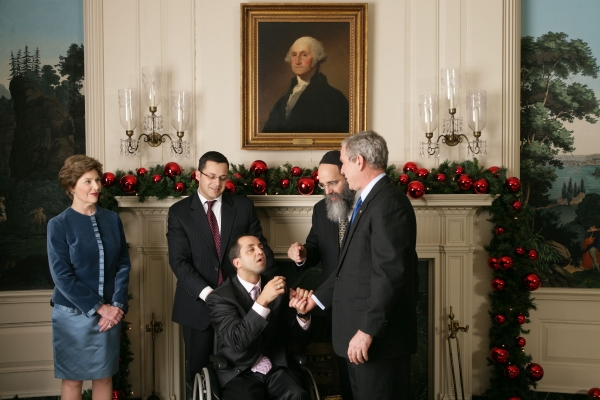