Circumstances dictated that we moved on. If you're thinking of doing the same then you must be prepared to compromise

And don`t dilly dally on the way

Off went the van wiv me `ome packed in it

I walked behind wiv me old cock linnet

Lost me way and don`t know where to roam

I can certainly sympathize with the reason she got lost: she stopped at the pub for a pint or two.

It is said that moving to a new house is one of the major traumas in life, together with divorce, redundancy, and bereavement. I did not agree with that when I was young with a growing family looking for a larger property.It was a positive challenge, finding the right place in a location with good schools and plenty of open space as well as a sufficient number of rooms.

But, faced with this in my seventies, moving home was a project that demanded a lot of physical and mental energy, mostly because I was perfectly happy in our current home and it was circumstances rather than a desire to relocate that was necessitating the move.

Many of our friends are facing this dilemma so perhaps there are some ideas and tips that can be shared. The reasons for moving home at this stage of life are varied: the empty nest that leaves us with a large property that is becoming too expensive and difficult to maintain; a wish to be nearer one`s children; as pensions get smaller and life gets more expensive one can downsize and boost one`s savings with the difference in the cost of the property; disability and failing health which render one`s existing property as inaccessible and inconvenient.

Each of those reasons could be argued with solutions which should be considered, if one cannot really face the upheaval of a move. If one`s property is too large to maintain, maybe it is easier to divide it, to create a separate apartment that could be rented out. This could also solve the economic reasons for downsizing. One may feel isolated from one`s children who have moved to the other end of the country, but does one really want to move to a new strange neighborhood, cut off from all one`s friends and activities and network of services, the familiar doctors, dentists, grocery store? Also, our children and grandchildren are busy all the week with their own activities, working, studying. Could one in fact be lonelier without one`s existing social framework if one only sees the family on Shabbat? Recharging our savings account by making a profit between sale and purchase may seem theoretically attractive, but consider the costs of agents, lawyers, moving expenses and probably renovations or alterations to the new property. Could disability and inaccessibility be handled with ramps, hoists, stair-lifts and the many other accessories available to those with mobility issues?

So, back to our personal choice and why we did decide to move house, albeit with a heavy heart. We are blessed with having some of the children nearby: one lives in Haifa, another in Atlit, another in Ramat Gan which is an easy ride by car or train. The fourth is in New York and that was certainly not on the agenda.

The main reason for our decision to downsize was my late husband`s decreasing mobility. We lived in a "medurag," a typical architectural style on the Carmel, a terrace of apartments, built in steps down the mountainside. The moment I saw it twenty-five years previously, I had fallen in love with the private entrance, the outside space, the view and the four-way flow of air and light as well as the open nature reserve at the end of the garden. However, there was no access without climbing up a steep flight of outside stairs. Although David had to stop driving he still could use buses with assistance, but the only bus stop was up another seventy steps to the street above.

So, having decided to re-locate within Haifa we made a list of requirements: minimum or no steps or availability of lift; minimum number of bedrooms but with sufficient living space; a good airflow and above all, plenty of light, as I have in the past suffered from SAD (Seasonal Affect Disorder). On that essential list was also a balcony or small garden. And accessibility to bus routes because the day may come when I no longer can drive.

Selling the existing property was easy and quick. It was a very desirable apartment and the young couple who bought it loved the outside space for their children.They were very flexible about moving dates, so we had over six months to search for our new property. That was not so easy. I must have registered with almost every real estate agent in Haifa but found that very few of them had qualified with listening skills. Even after giving them my list of requirements, I was taken to apartments with steep stairs, dark and dingy rooms, or windows overlooking busy noisy streets. The developers of modern apartment blocks which are built with lifts and car-parking make more money per room, so many of them had more bedrooms than we needed but small and inconvenient living space.

In desperation I started to make a short list, this time taking David for his opinion and also recruiting my son Daniel, who is an architect. David looked at accessibility, Daniel looked at the structure of the building and I looked for quiet, light, and air.

I love to watch the British TV programs - Location Location, Under the Hammer and Escape to the Country. It is frustrating to see that the cost of a spacious house with a sizeable garden in rural England would only buy a three-room flat in Haifa. But, one does learn the valuable mantra: compromise. 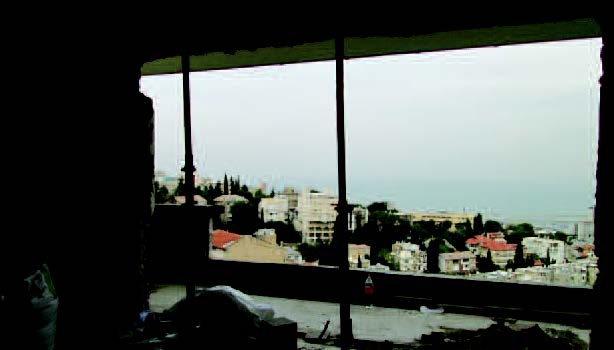 Room with a phew!

The apartment we eventually chose was in an older neighborhood, still sufficiently high up on the Carmel to give us an amazing view over the Bay, but with old-fashioned low-rise apartment houses, built in the 1960s. I have always loved old buildings with their high ceilings and proportions, but they are often badly neglected. Although it is on a main road (with all the bus routes one could need) the building is set back and with the living space and master bedroom facing the back and open view, there was very little street noise. Had it not been for my architect son, I would have probably rejected it at first sight. Like many old properties, the rooms were separated with too many walls reducing the space. At first glance it was dark and stuffy because there was a concrete wall between the living room and a small balcony. When I began to protest to the agent why on earth he was showing me this apartment, he told me to go through the small door on to the balcony and there lo and behold was a magnificent view of the Bay stretching to Rosh Hanikra in the north and the mountains of the Galilee as far as the Hermon to the east. Daniel`s eyes lit up, this was a challenge.

Together with my son Jonathan, who is a qualified electrician and mechanic, Haifa`s favorite handyman, we made plans to completely gut the interior, replace plumbing, electricity, doors, floors and windows. There was a good-sized bathroom with ancient plumbing but without a toilet.The only toilet without even a basin was opened from a door in the hall next to the master bedroom.The kitchen was fitted with 1960's brown Formica with a minimum of cupboards.

The first week was spent solely on demolition as the walls came tumbling down, windows and doors removed, and floors ripped up.Speed was important because we could not live there during the renovations, so we actually owned two apartments during that time period.We could only hand over the keys to our buyers when we could move but, miraculously, the job was completed in two months. Flushed with success ... the renovated bathroom

And so we saw the transformation. Daniel`s plans on the computer were implemented to make use of every centimeter of the space.A toilet was fitted into the renovated bathroom and a second wet-room was created with access from the master bedroom.The second bedroom, doubling as my consulting room and library, was extended by demolishing a wall connecting to a small service balcony and a utility room was created by closing in another service balcony.The kitchen, while being completely re-designed could not be extended so that the utility room provided space for the washer and dryer and storage for cleaning materials and non-food items. Doorways were widened to access wheelchairs; pale wooden floorboards were laid in the bedrooms with clean cool tiles throughout the rest of the apartment.

Then came the compromise.I had set my heart on a balcony or garden. When the wall between the living room and balcony was removed it was to be replaced with French doors. However, as in many old buildings the balcony was not an open terrace sufficiently large to have a big table and chairs for entertaining friends. It was quite shallow, and my architect son advised me that if we put floor-to-ceiling windows on the outside of that balcony it would give a good extension to the living-room.Very reluctantly, I agreed but once done I realized how right he was. I love entertaining and while not all seasons are good for al fresco, I can now seat many more people in the lounge space. On occasions such as the Seder or other festivals when the entire family need to be seated we can use extending tables that stretch the entire length of the living room. 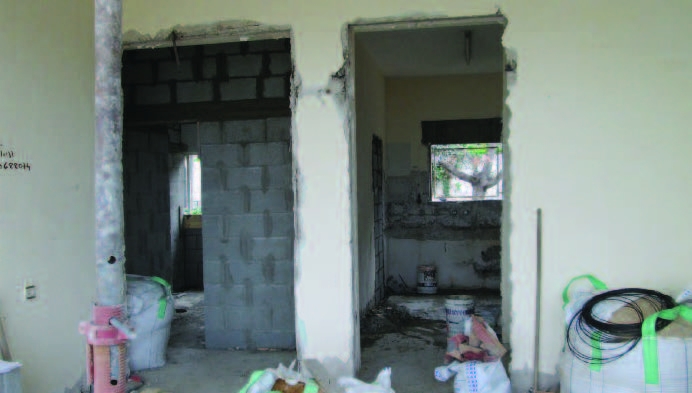 The alcove at one end of the closed balcony was ideal for fitting my desktop with its computer, printer, telephone. Flooded with light from the windows on two sides of this corner, it is a pleasure to work there, taking time to look out at the ships in the bay.The alcove at the other end, also looking out to the view was the perfect place for bookshelves and the big adjustable armchair that David enjoyed for the rest of his days.

Finally, the walls were plastered and painted, cornices fitted at the edges of the high ceilings and we were ready to move in.

Downsizing is dreaded by most people because one has to part with so much of one`s past.Books that will not be read again, papers and files not now needed, the overflow of dishes and pans that one accumulates. David was a hoarder and my daughter had to use all her powers of persuasion to get him to send 25-years accumulation of old empty work diaries to the recycling bin.

When the van came on moving day, I closed the apartment that I had loved for so many years.Strangely enough, I was not as tearful as I had expected to be.Without all the pictures, furniture, and artefacts that had made it home, the soul had gone out of the apartment.

David lived for another four years in a home that gave him better accessibility. With his walker we could go together to the local shop and although he could no longer use buses, I could take him in the car to the beach, to the shopping mall, to visit friends, and to ESRA meetings.Now, that I am alone, I find the smaller space very easy to clean and maintain, and although I drive, it is sometimes easier to just jump on a bus to places where parking is difficult.

So, my message is, firstly think carefully before deciding to move.Perhaps problems can be solved by staying put.And if one must move, keep all the options open. Get rid of the clutter well in advance of the move. And above all be prepared to compromise.