Don Quixote Of the Art World 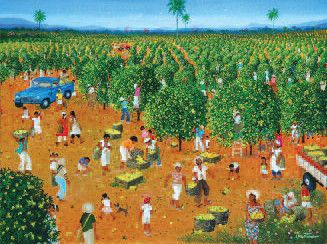 Once upon a time, Dan Chill was a lawyer working on the behalf of Israeli Aircraft Industries. After a particularly tough day of negotiations in Tegucigalpa, Honduras, he and Moshe Keret, Israeli Aircraft's CEO, noticed a small gallery across the street from their hotel. Chill recalls, "there were paintings in the window that drew our attention. We liked what we saw and went in."

Dan stared at the paintings in the little gallery and entered a world unlike any place he had ever been.

The world is an enchanted place, without poverty, illness, anger or violence, where smiling people promenade hand‐in‐hand, dance, play musical instruments, picnic in fields of soft grass and bright flowers, work in their gardens, and sing happily while performing their household chores.

It is a world where beautiful grinning girls carrying baskets of sliced watermelon on their heads stroll languidly by people hanging clothes, trimming hedges, watering flowers, drinking coffee, playing fetch games with little pet dogs, and feeding chickens. And everyone – without exception – is smiling, including the dogs and chickens.

Above all, it is a world almost bursting with vivid colors, where exquisitely quaint rural villages sit nestled among verdant turquoise‐colored hills, shaded by the emerald green leaves of enormous palm and banana trees, refreshed by streams that sparkle in the morning sunlight, all under a brilliant blue sky with a few fluffy, cotton candywhite clouds. 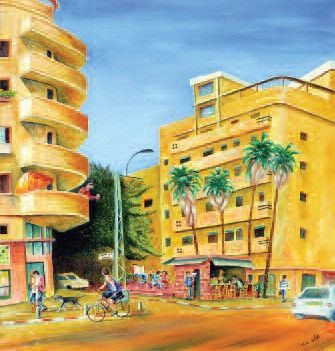 What Dan Chill discovered on that long‐ago day is the world of naïve art. Once called "primitive art" and initially popularized by artists like Henri Rousseau and Anna Mary Robertson ("Grandma") Moses, naïvism is a genre that has certain basic characteristics, according to Dan.

These include a charming, almost childlike innocence; artists who usually have not studied art and are instead selftaught; and an almost obsessive attention to detail. "There is nothing abstract or impressionistic about these paintings", says Dan.

We sometimes ask the naïve artist, "Why was it important for you to paint all the 1,350 leaves on that tree?"

Another characteristic is an idealized view of the world—life not as it is, but as it should be. "The artists dip their brushes in their hearts when they paint," Dan says. "and we can feel their love expressed in their paintings. Each of their paintings is a colorful, joyful celebration of the human narrative." 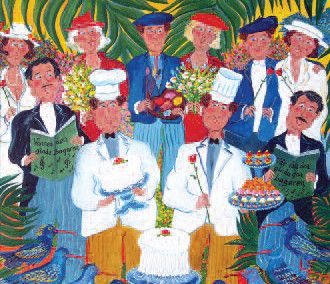 Dan bought a painting that day in Tegucigalpa, and over the next few years bought many more—all for his own collection, all for display on the walls of his own home. When he saw that these paintings were speaking to the hearts of visitors to his home as intensely as they were speaking to his, he decided to become "Dan, not Don, Quixote" on behalf of naïve art. He saw it as his mission to bring works of naïve art from all over the world and display its strengths as a genre. Thus was born the Gallery of International Naïve Art, better known as GINA, at 255 Dizengoff Street in Tel Aviv. "We opened our doors in December 2003 and very quickly became a sensation."

And now, around 100 exhibitions later, GINA celebrated its 15th anniversary last December with a gala party and a new exhibition of some of the gallery's most popular naïve artists from all over the world, called "Sweet 15". Asked if he thought that GINA would still be around in 2019 when he opened the gallery in 2003, Dan admits that he would have been happily surprised to know it would still exist 15 years later, selling an average of one painting a day for most of those years. "I also didn't realize when we started, covering 75 artists from 10 countries that within 15 years we'd be covering more than 200 artists from 37 countries, and that I would be able to visit each artist in his or her home more or less once a year and bring back new paintings for future exhibitions."

Dan says that getting those paintings has not always been easy, and that he's had his share of adventures along the way. "One time in Guatemala, on my way back from visiting an artist, I had to cross a lake in a very serious storm that just broke all of a sudden. There were very high waves, and this trip which normally takes twenty minutes took over an hour. There were moments when I thought that I wasn't going to make it. That was really a life threatening experience."

And yet nothing succeeds like success, which Dan attributes purely to the appeal of the art itself. "There's nothing magical about what I or my staff are doing. It's the magical works being painted by these various artists which are so uplifting. People enjoy these paintings, buy them, and want them in their homes as an antidote to the conflict and craziness of the 'real' world."

GINA Gallery of International Naive Art
255 Dizengoff Street, Tel Aviv
Tel: 03 544 4150
This email address is being protected from spambots. You need JavaScript enabled to view it. 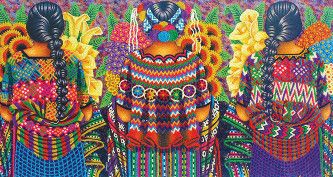