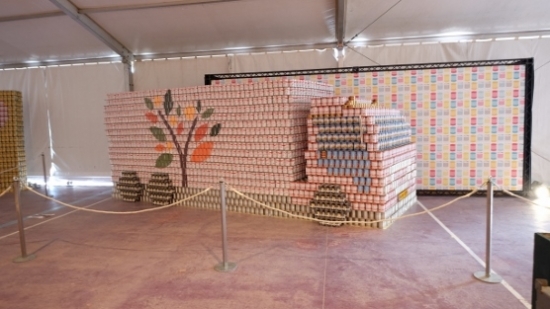 Story and Photos by Marian Lebor

It's a constant challenge for nonprofit organizations to think of new ideas to raise awareness about the work they do. Leket Israel recently found an ingenious way to highlight the importance of food rescue, minimizing food waste and giving back to the community. Together with Raanana municipality, it hosted Israel's inaugural Canstruction exhibition: "Come and See What Cans Can Be" in Raanana Park. The exhibition consisted of several large-scale artistic displays made solely from cans of food which were all subsequently donated by Leket to its 180 nonprofit partner agencies across the country.

In Israel, 40% of all food produced is thrown away even before it reaches the plate. This shocking statistic occurs across the food chain from agriculture to food manufacturers, supermarkets, hotels, catering halls restaurants and private consumption.

Canstruction is a unique charity which hosts competitions, exhibitions and events showcasing colossal structures made out of full cans of food. Canstruction exhibitions have taken place in more than 150 cities worldwide and so far nearly 30 million pounds of food has been donated to local hunger relief organizations.

"We sourced more than 70,000 cans for our Canstruction exhibition and invited artists and industrial designers to turn them into something creative," explains Joseph Gitler, Leket founder and chairman. "The displays were all related to Leket's food rescue initiatives."

Among the seven installations of "can art" were a Leket collection and distribution truck, which itself comprised 13,500 cans, a huge slice of water melon and an open refrigerator. Up close it was difficult to work out what some of the installations represented, but stepping back and viewing at the correct angle it was possible to see how cleverly each piece had been created. The refrigerator was the most topical exhibit as it contained so-called "ugly" fruit and vegetables. This is agricultural produce deemed too unappealing to make it onto supermarket shelves and so it is thrown away. In France last year, a major supermarket chain launched an initiative to rescue ugly fruit and vegetables and sell them for 30% less than their beautiful counterparts. Ugly or beautiful, the produce tastes the same and the project was a great success. France is clearly leading the way in preventing food waste: a law was passed at the end of May that bans large supermarkets from throwing away food approaching its sell-by date and compels them to donate it to charity. If the food is genuinely unsafe to eat, then it must be given to farmers for use as animal feed or compost.

Is there any chance that Leket and other similar organizations could press Israel's politicians to pass a similar law? "The problem in Israel is that as soon as we start getting to know the relevant lawmakers, there is a change of government," says Gitler. "It makes it very difficult for activists to lobby effectively."

Leket has managed to introduce initiatives not dependent on legislation, but that have still taken time to implement. "After years of negotiations, the army finally agreed to open up every base in the country to Leket. We are paying other nonprofit organizations we work with already for the gas to use their vehicles to pick for us up hundreds of meals from army bases in their region. We can't get to all of them, so we are trying to raise funds to buy two smaller vehicles and hire drivers so we can go to parts of the country where there are concentrations of army bases and collect from there. This way, until the army can figure out how to waste less food then at the very least Leket is going to figure out how to get that food and give it to those who need it."

A close up of the ugly carrots

Leket has expanded its work to Eilat, where it now has a permanent truck. "We collect food from about ten hotels and we also have a smaller vehicle that collects from several army bases nearby in the south and brings food to the larger truck. Eilat has little demand for the food we collect, so on a daily basis our truck takes out about 2,000 meals a day from the hotels and army bases to Beersheva, Ofakim, Yerucham and Mitzpe Ramon - still quite far from Eilat, but where there is more demand. I think we can double or even triple our work in size as we sign up other hotel chains and go to other army bases in the area that have excess food."

More than 3,000 people attended the Canstruction exhibition. They were all encouraged to bring cans of food to donate – after they had used them to create their own sculptures with the help of artists who were present throughout the five-day exhibition. For Gitler, the main goal of the event was to raise awareness not only about Leket's work on a national level, but perhaps even more importantly to make people think about the amount of food they waste in their own homes. "We hope that through the art, individuals and families left this exhibition with a greater appreciation of these critical issues."