Dazzled by Pride of Azerbaijan 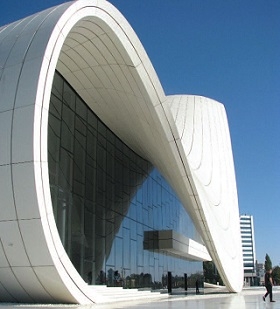 The Heydar Aliev Museum is in the shape of a reclining figure 8. Photos: Ruti Porter

Ruti had been reading about Baku and had chosen Azerbaijan's main city on the Caspian Sea for our holiday.

I read: gale-force winds most of the time. High humidity: after more than seventy years of ignorance I discover this refers to the moisture in the air – not to heat. Of course, it's November!

Azerbaijan's constitution gives freedom of religion to its inhabitants – Moslems, Jews and Christians, plus several other beliefs (Zoroastrian being one). They live together in harmony and religious propaganda is banned.

Ruti booked a guest room within the old city walls – a highly interesting place surrounded by an even more interesting super-modern city.

Baku is a gem. The oil/gas-rich "Azzies", or rather their superior leaders, invested a lot of time and money in the city, and turned it into a real showcase.

The city is backed by a high, generously spread-out mountain which slopes gradually down to the sea. A mix of old, modern and ultra-modern buildings flow down the slopes. Each is in its own space – they all seem to blend: even three towering structures of glass, the buildings shaped like leaping flames, plus a few futuristic buildings, with lines flowing in surprising directions.

Perhaps the secret lies in spaciousness – and of course lots of money (the oil and gas reserves flow freely under the earth here) which enabled the authorities to have the best architects and planners involved in making Baku the pride of Azerbaijan. 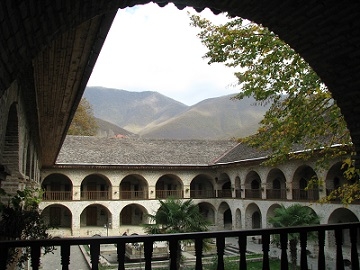 The caravanserai in Sheki

Near the sea the city levels out – the promenade is flat. About half a kilometer wide, it consists of at least four different levels running parallel to each other. A few stairs here and there lead down to the next level. These multi-promenades flow alongside each other for about five kilometers in a gigantic curve around the bay. A spacious walk along endless paving, lawns, flowers, trees, benches, and far from the noise of the traffic. And still further down, twenty-eight meters below sea level, is the Caspian Sea.

The city itself has wide pedestrian malls, large open squares with fountains and amusing statues, and parks. In the evenings the "Azars" and their little kids can be seen walking or running everywhere. Hey, they're so quiet and modest, even the kids.

Prices in Azerbaijan are ridiculously cheap. They're still fairly new on the tourist map, and if you want bargains, now's the time to go there.

A minor example of this is the ever-present pot of tea. Outside the city we stopped for a pot of tea (enough for four generous servings). It cost one manat (two shekels); in Baku, in the old city, the price was five manat (ten shekels) for a similar large pot. Big difference!

The city's weak point is its ever-flowing traffic. Near the sea downtown there are not enough pedestrian crossings, few traffic lights and underground passageways. The traffic speeds along the main roads and it's advisable to walk to the underpass.

Not far away, within the old city walls, walk where you want to – it's "pedestrians first", and few cars. The cars have to pass controlled entry points to get into these cobbled, winding streets.

The old city spreads over a large area and is surrounded by a thick stone wall attractively designed and built of buff-colored stone.

On our first day we followed the sloping cobble-stone street which curves within the wall of the old city. We saw many old buildings built of this beautiful stone.

We went out for dinner. Prices were ridiculously low: about one-third of what we're used to in Israel – but I'm not complaining, honest! The yoghurt soup was delicious. The mutton they say is outstanding, but I had to accept their word for this as I don't eat meat.

Near the sea is the carpet museum. The building is shaped like a rolled carpet, four-storeys high, with curved walls and hundreds of huge carpets on display. Videos and models tell of the history and origins of the carpets of Azerbaijan.

On several floors were young ladies (real ones), each sitting at a large loom and weaving carpets.

There was a slight drizzle as we came out of the building and walked along the promenade – about the only rain we had here. Occasionally there was a breeze – nothing like those gales I read about.

We took the funicular up the mountain. At the top we saw the Mosque of the Martyrs, built by the Turks in the 1990s, in memory of the Turkish soldiers who died in WWI. From the park around the mosque there is a wonderful view of the city and the sea. 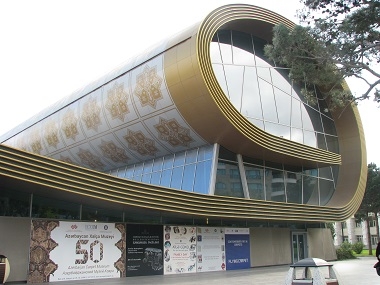 Exterior of the Azerbaijan Carpet Museum

Walking down we stopped for tea at one of those three super-modern thirty-storey Flame Towers. All the buildings have glass façades and are lit up at night with gigantic moving colored lights and pictures. The glass tops of the buildings curl into a point, like flame tops.

Next day we had a bumpy ride to Gobustan. In large open countryside not far from the coast are dozens of mud-lava hills in an otherwise flat area. Imagine a volcano about four meters high. On the top it has a small crater, filled with a liquid mud mixture. Every few seconds an outsize "bubble" pops out onto the surface – and bursts. Thin rivulets of mud ooze slowly down the sides of these "volcanoes".

I walked up several such mounds. I was in a hurry to get down one; part of my shoe touched some wet "magma", and the next thing I knew I was rolling downhill. By the time I got up my clothes were liberally covered with this muddy souvenir from Azerbaijan. Let no one say this is only mud – the oil makes it more slippery than an ice pond.

Not far off are petroglyphs scratched on the rocks of a strange hilly area.

And then it was off to "fire country", at the end of the bay on the other side of Baku.

In this area a small enclosure has been built around several perpetually-burning fires which spring out of the earth. Rooms are filled with signs and effigies of the holy men from India who, over the centuries, used to come to spend the last days of their lives near the "holy" fires.

On this side of Baku is the "burning mountain". In empty countryside near Yanar Dag, with night coming on, we saw flames shooting out of the side of a high hill which seemed to be on fire. It is pleasantly hot near the flames, and we joined a throng of people standing around the "bonfire", warming themselves.

Sunday – walking in the winding alleys of the old city we stopped at the Juma mosque, with beautiful colored decorations inside the dome and arches, and then continued to the Maiden Tower. This is a tremendous, solid, cylindrically-shaped stone building (think outsize chimney). No one really knows what its original function was and when it was built. We walked up eight winding flights of old stone stairs (each floor with explanations and exhibits) and took in the view at the top.

Next was the Haydar Aliyev Museum – a building shaped like an all-white gigantic reclining figure 8.

The building alone is worth the visit. Each floor stops halfway, leaving a tremendous empty space stretching from roof to ceiling. For those who don't use lifts a gigantic curving white staircase runs all the way down – the wide side of the stairs is at one end, while at the other end the stairs slope down to little more than points.

Next day, equipped with a small bag, we travelled to Sheki – four and a half hours in a crammed minibus. On the way I looked out of the window, a travelling hobby.

Tiny houses, separated by dirt roads, are scattered in little villages in mountainous countryside – then a lake, followed by lots of open countryside. Low, grass-covered hills – the hills get higher, the road steeper. Eventually we reached mountain country. Trees on mountains display autumn colors of yellow and red. In the distance we saw the Caucasian Mountains, with snow on their peaks.

At last we reached Sheki, and walked along the main road of this tidy mountainside town. There are modern shops and the buildings are of buff-colored stone.

After more than half an hour of hard uphill walking the tiny pavements vanish; we walked in the narrow road, avoiding the stone gutters built for the overflow water which continually oozes down the mountain-side.

Eventually we got to a small wooden door cut out of the great closed wooden arch which fits under the high barrel-shaped stone ceiling. Through the door is the open courtyard of the caravanserai. The huge square is surrounded by arches which frame two storeys of passageways leading past the doors of numerous rooms. About two hundred years old, the building was once a stop on the ancient silk route.

We walked up a stone stairway leading to the first floor, and opened the heavy wooden door to a room. The stone walls of the room are a meter thick, the ceiling and the door tops are arched – everything is made of stone except for the doors and the parquet floor; Ruti fell in love with the room and decided we'd stay two nights.

We had dinner in the large garden of the Qaqarin Restaurant, halfway up the mountain. Below us was a conglomeration of rooftops, above us the mountain was green. Peaceful and quiet, words that apply to Azerbaijana a lot.

Next day we went back to the restaurant for a late breakfast: a small room was set up especially for us: we had bread, honey and coffee. But, like all the places we visited in this country, they don't serve milk with coffee or tea.

Our tour began with the Shah's summer palace, high up the mountainside, and a gradual walk down to the city.

The palace is a luxurious building. Rooms, ceilings and walls are painted with a variety of scenes; the windows are made up of small multi-colored glass squares.

On our way down I saw that parts of the streets have massive loose stones lying on them – murder on car tyres!

Next day – our last in this country town –we bought the famous Sheki halva, and asked the young man serving us where we could catch the bus to the open-air bazaar. In front of the shop, he said.

We stood at the bus stop – not more than a minute – when I saw the young man come out of the shop, lock the door, and walk to his car. He brought it to where we were standing, and drove us to the bazaar.

Like the one in Baku, the bazaar is a massive sprawl, some parts quite organized. The men and women selling things have a real country look.

Back to Baku, packed in a minibus. In the middle of our journey the driver made the essential p-stop. Two women sitting near us said they were going to have tea, and we followed them to the restaurant, sat at the same table, and drank from a large teapot (enough for four, remember). I wanted to pay, but discovered that they had already paid. We reached Baku in the late evening. Waiting for us was the landlady's cousin in his car/taxi, and he casually threaded through the stream of traffic flowing down the mountainside.

Time passed too quickly. There were things we wanted to do in Baku – go to the giant puppet show and the concert of ethnic music – but their timetables just didn't cooperate with our short holiday.

After the quiet and peacefulness of Baku we flew off to the effervescing city of Istanbul, perched on high mountains.