May 03 Posted by Sharon Bacher in September 2007 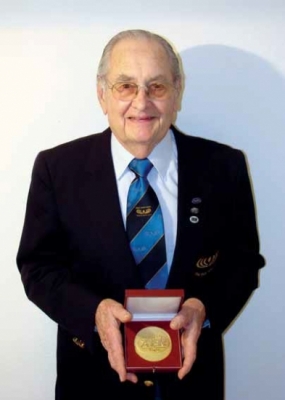 Is there a rugby following in Israel?

Indeed there is, thanks to a small band of enthusiasts – in particular Cyril Morris of Raanana, whose contribution was recently recognized by FIRA – AER (Federation International de Rugby Amateur – Association Européenne Rugby) at their congress in Monte Carlo. Cyril received their beautifully designed Special Gold Medal, an honor which gives Cyril well deserved nachat. Cyril had previously been awarded the Federation's silver and bronze medals of merit in 1987 and 1992.

"What was really appreciated," said Cyril, "was when FIRA – AER also recognized Riva – my supporter and partner. We've been married for 60 years and she loves rugby as much as I do. It was thoughtful of the organizers to call Riva up to the stage to show their appreciation."

Talking to Cyril in his study, cluttered with books, magazines, flags, numerous certificates and awards one meets a man who loves rugby. Soon after his aliyah he made it his goal to introduce Israelis to the sport and Israeli rugby to the world.

"What's so special about rugby?"

Cyril's good friend Bobby Kantor explains: "It's a body-contact team sport ... it's charged with energy ... in rugby you can let your aggression work for you!" Cyril adds, jokingly: "They say rugby is a ruffian's game played by gentlemen, while soccer is a gentleman's game played by ruffians!"

Cyril was born in Johannesburg in 1923. He went to King Edward School and on to Witwatersrand University where he played rugby. "I loved the game and went to all the matches at Ellis Park. When we moved to Durban in 1958, I played for King's Park."

Cyril and his wife, Riva, made aliyah in 1973. "I was offered a job soon after I arrived, but I decided – I was already over 50 then – that if I didn't learn Hebrew at the ulpan, I never would. He smiles and I guess he's thinking that he's never looked back.

Remembering the early days of being in Israel amuses him. "I would bus to work and eat my sandwich on the bus. Sometimes I would picture myself sitting there and eating and remember the old days back in South Africa, when I wore a suit to work and went to restaurants!"

"What brought you on aliyah?"

"The kids – two of our four kids were here and the others came later. All were Zionists; they grew up in the youth movement Habonim. Once, we had all four of them working as madrichim at camp – all at the same time!" Today Cyril and Riva have eight grandchildren, and, eyes lighting up, he adds: "And one great-grandchild!"

"In the early days there was very little interest in rugby. I used to go and watch. Everything changed in 1975 when we went to the annual general meeting of the Israeli Rugby Union and Riva nudged me and suggested I stand for election as a member of the council. So that's how it began. Cyril was a member of the Council until 1995. He was President from 1979 to 1993 and immediate Past President until he was appointed Secretary General in 1995. Cyril held this position until he retired in 2006.

Bobby says it was through Cyril's efforts that Israeli rugby gained international recognition. "In 1980 we were accepted as a member of FIRA. Israel played its first international friendly match against Switzerland. Through Cyril's determination, rugby was accepted and played at the Maccabi Games for the first time in 1981 and every four years thereafter to 2005.

The fledgling Union gained further recognition when the International Rugby Board did away with restrictions keeping the smaller national teams out of the prestigious IRB Rugby World Cup. In 1989, for the first time, Israel was one of many small nations that played in preliminary matches as a contender for the world title. "We were eliminated very quickly. We didn't stand a chance – but it was a first step." Since then Israel participates in all world cup tournaments.

While a member of the council and Secretary General of the Rugby Union, Cyril worked tirelessly to promote the sport internationally, a contribution recognized by many organizations. In 1998, on the 50th Anniversary of Telfed, the South African Zionist Federation, he received a prestigious gold statuette for his contribution to the development of rugby in Israel.

How has rugby enriched your life?

Cyril looks at me as if he can't understand why anyone would wonder. "Through rugby I made friends – lots of friends; good friends." Bobby adds, "I got to know Cyril through rugby. Matter of a fact, when Cyril turned 80 we – his rugby friends and family – gave him a fantastic surprise party at the Raanana Bowling Club. It was fitting that he received the recognition he deserved."

"When Cyril started, rugby was a game for expat Anglos only. Slowly, thanks to Cyril's gift for befriending young people, Israeli teenagers joined. Rugby provided a bridge for us to build friendships with them. Today, more Sabras than Anglos play!"

Both Cyril and Bobby agree that there's no problem attracting young people to the game. The trouble is keeping them involved once they've gone into the army. "They play rugby at the officers' training school as well, where they're quite enthusiastic. But afterwards, they disappear. Once they've joined the work force and started their families – forget it!"

Cyril stresses that rugby is a team sport, and running it required team work. He said "I was only able to achieve all I did because of the support of many good friends over the 32 years. They, like me, put in many hours of dedicated hard work for the sport they all love".

Cyril is 84 and going strong. With his lifetime contribution behind him and surrounded by his family and good friends, he has much to remember to make him feel good. He enjoys checking off the milestones of his life against achievements he made in promoting Israeli rugby.