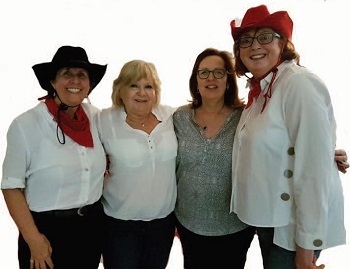 The smell of soup on the boil and hot dogs being kept warm on hot trays wafted in as cowboys, sporting jeans, checkered shirts and Stetsons, and cowgals in skirts, white blouses and colored kerchiefs swaggered through the doors of the Beit Ha'am at Moshav Haniel.

It was 7.30 pm on the evening of Thursday, March 8th and the stage was set for ESRA Netanya's first Barn Dance.

The Beit Ha'am was decked out with US bunting, red checkered tablecloths and cardboard cut-out cowboys, horses and signposts.

After the tucker of soup, hotdogs and coleslaw washed down with beer, the Caller, Cyrelle Soffer, of Jacobs Ladder fame, called the assembled together to form a large circle. She put the would-be dancers through their paces as she gently introduced the intricate barn dance steps of progressing in a circle, arm right/left, figure of eight, doh-si-doh, and forming a set or reel of four.

Some, exhausted by the exertion, sat at the side drinking and foot a-tapping, while the more energetic continued unabated swirling and sashaying. 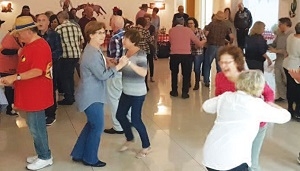 ​Cyrelle was a good judge of the stamina of her audience and after two hours of non-stop dancing, she brought the evening to a close with a short recital on her zither.

The event, organized by the ESRA Netanya Events Committee, led by Gill Cole and comprising Roz ben Ezra, Candy Bliss, Aviva Friedman, Carole Kaye, and Barbara Kliner, with the help of their respective husbands, did a sterling job.

As well as being a great night out and an unabashed social success, the event raised over NIS2,500 towards the much needed ESRA Netanya projects.